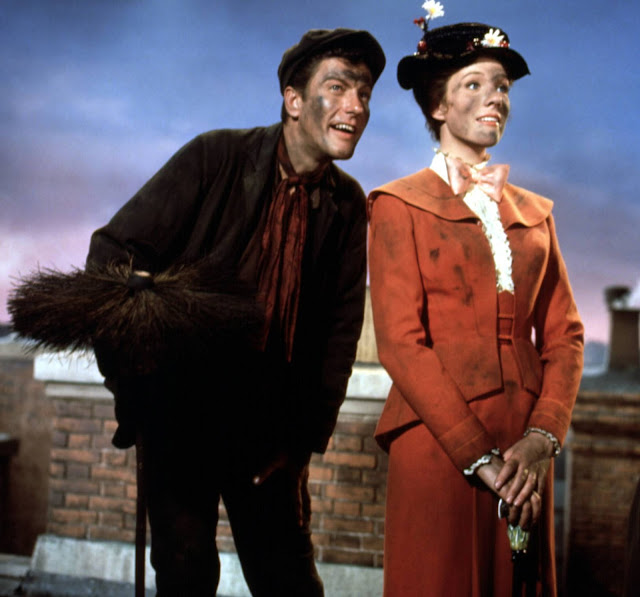 This article is part of the 6 from the '60s blogathon hosted by Classic Film and TV Cafe. Click on the highlighted text for more articles about the movies' grooviest decade. The photo above shows Dick Van Dyke and Julie Andrews in the 1964 musical Mary Poppins.

The 1960s were a decade of transformation in American cinema. The Hollywood studio system that began in the 1920s largely petered out be the middle of the decade. It was replaced by a more personal, auteur-driven cinema with provocative films like Bonnie and Clyde (1967), 2001: A Space Odyssey (1968), and The Graduate (1967) topping the box-office and winning critical plaudits and Academy Awards. 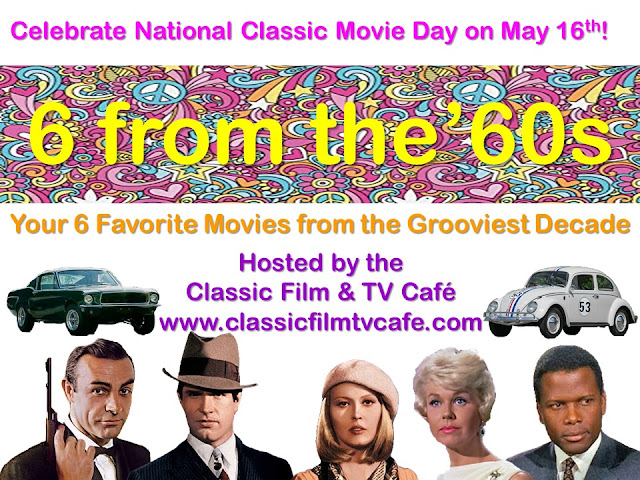 Many of the genres that defined old Hollywood films in the 1940s and 1950s managed to survive and even flourish throughout the '60s, although some were essentially transformed while others ended only to be revived in the 1970s by auteurs like Martin Scorsese, Francis Ford Coppola, and Roman Polanski. In this article, I'm writing about six of my favorite films from the decade, each of which represents a different old Hollywood genre.

The Western started the decade in a strong place. TV Westerns like Bonanza, Gunsmoke, and The Maverick were popular, and movies like director John Sturges action flick The Magnificent Seven (1960) were huge hits at the box office.
By the end of the decade, the Western had been essentially transformed, first by the Spaghetti Westerns coming from Italy like The Good, the Bad, and the Ugly (1966) and then through director Sam Peckinpah's ultra-violent The Wild Bunch (1969).
In 1962, Peckinpah was a writer/director of TV Westerns when he united old Hollywood stalwarts Joel McCrea and Randolph Scott for Ride the High Country, a film about two old pals who go on one last adventure. In a few scenes, Ride the High Country is more provocative then most films made in 1962, but Peckinpah mostly dials down his taste for blood-letting in favor of a laconic, beautifully photographed buddy movie that feels like an elegy for the genre and two of its most beloved stars. Ride the High Country will air at 9:15 pm ET June 3 on TCM. Also available on Blu-ray, DVD, and video on demand.

Old Hollywood's slapstick heyday was in the 1920s, when geniuses like Charlie Chaplin, Buster Keaton and Stan Laurel and Oliver Hardy manufactured belly laughs. Slapstick continued in the sound era with the roughhousing of The Three Stooges and the surreal pratfalls of Jacques Tati, but slapstick's swan song was It's a Mad, Mad, Mad, Mad World, a star-studded extravaganza from the previously super-serious director Stanley Kramer (Judgment at Nuremberg, Inherit the Wind).
It's a Mad, Mad, Mad, Mad World is a bit too long (the final chase scene drags a bit) and a bit too moralizing (preachiness was always a failing of Kramer's), but it has many hilarious scenes, including the wild plane ride of Mickey Rooney, Buddy Hackett, and Jim Backus ("put your little hands on the wheel" and "what can go wrong with an old-fashioned" are two of my all-time favorite movie lines) and Jonathan Winters single-handedly destroying a gas station. There's cameos from several comedy legends including the Stooges and Keaton, but Dick Shawn as a mama-loving beach bum steals every scene he's in. It's a Mad, Mad, Mad, Mad World is available for streaming on The Criterion Channel. Also available on Blu-ray, DVD, and video on demand.

Film noir  went out with a bang in 1958 with director/star Orson Welles' Touch of Evil, but vestiges of old Hollywood's darkest style lingered throughout the 1960s in low-budget movies shown at drive-in theaters and stylish whodunits like Harper (1966) and In the Heat of the Night (1967). Perhaps the '60s purest example of noir is In Cold Blood, which is based on writer Truman Capote's true-crime bestseller about the murder of a rural Kansas family by two drifters.
In Cold Blood deals with the pervasive presence of violence in American life (the Clutter family were slaughtered for around $50, a portable radio, and binoculars), and the roots of that violence. Richard Hickock (Scott Wilson) is portrayed as an insouciant psychopath who goes about his life of crime with casual indifference, but Perry Smith (Robert Blake in a brilliant performance) is a different story. Smith is not a natural born killer, but man-made one, whose life of parental neglect, bullying, and chronic pain leads him on a relentless path to death row.  In Cold Blood is available for streaming on The Criterion Channel. Also available on Blu-ray, DVD, and video on demand.

Many old Hollywood studios embraced more provocative material in the '60s, but Walt Disney's movies remained a bastion of wholesome family fare. Uncle Walt produced successful films like Pollyanna (1960) and The Parent Trap (1961) with teen star Hayley Mills, but the best Disney film of the decade (and maybe the best Disney film of all time) was Mary Poppins.
This delightful musical about an unusual nanny (Julie Andrews) who comes to the aid of an banker (David Tomlinson) and his two children (Karen Dotrice and Matthew Garber) is filled with wonderful songs from brothers Robert and Richard Sherman, and boasts an Oscar-winning lead performance from Andrews. However, the movie's real strength is its embrace of English eccentricity such as Ed Wynn's ceiling tea party and the Banks' cannon-blasting neighbor (Reginald Owen). Mary Poppins is available for streaming on Disney+. Also available on Blu-ray, DVD, and video on demand.

Science fiction was an underrated genre during old Hollywood's heyday. It was mostly the stuff of Saturday morning serials until the 1950s when several first-rate films (The Thing from Another World, It Came from Outer Space, Invasion of the Body Snatchers) served as timely fables for life in in Cold War America.
However, the genre didn't really come into its own until writer/producer Rod Serling launched the TV series The Twilight Zone in 1959. Serling followed up his small-screen success with an adaptation of Pierre Boulle's dystopian novel about a world that is ruled by monkeys who enslave a helpless human population.
When it was released in 1968, Planet of the Apes launched the age of the sci-fi blockbuster and enshrined Heston as the genre's first superstar. Heston, who was formerly known for more reverent roles in Biblical epics like The Ten Commandments (1956) and The Greatest Story Ever Told (1965), went on to star in Omega Man (1971) and Soylent Green (1973). Planet of the Apes will air at 2:30 am July 23 on TCM. Also available on Blu-ray, DVD, and video on demand.

In order to lure audiences away from their TV sets, Hollywood studios produced several extravagant costume dramas during the '60s that were designed to fill the big screen with endless spectacle. Some of these films are quite good -- notably Lawrence of Arabia (1962) and The Fall of the Roman Empire (1964) -- but even those grand accomplishments pale in comparison to the Soviet version of Leo Tolstoy's classic novel of the Napoleonic invasion of Russia, War and Peace.
War and Peace, which is divided into four parts, is very long (431 minutes) and I suspect it would be somewhat hard to follow for those who haven't read the novel, but it is at least worth watching the first part (titled Andrei Bolkonsky) for both its intimate look at the lives of upper-class Russians, and its exceptional production values (priceless artworks were literally hauled out of storage for this film). There's so much jaw-dropping spectacle that it makes Gone With the Wind (1939) look like a community theater production (see clip above).
There are a lot of prints of War and Peace floating around the Internet, but it's worth seeking out the high quality print offered by The Criterion Collection, which is available on The Criterion Channel or on Blu-ray/DVD.

Happy National Classic Movie Day! I hope you'll celebrate by watching at least one of the movies recommended by me or my fellow bloggers. I'll leave you with the Sherman Brothers' Oscar-winning song from Mary Poppins, "Chim Chim Cheree."