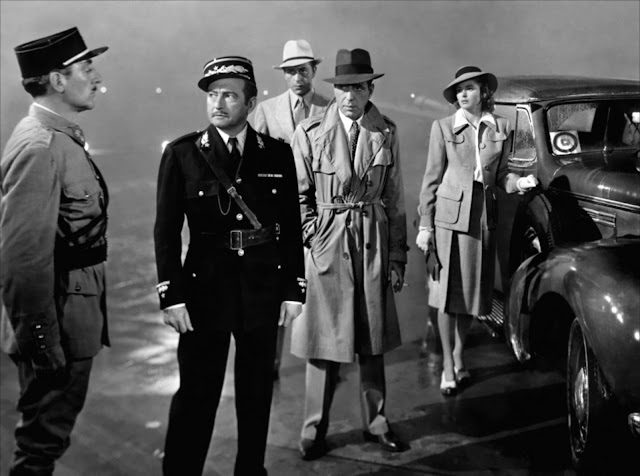 This article is part of Classics for Comfort, the spring blogathon from members of the Classic Movie Blog Association. Click on the highlighted text for more warm and fuzzy picks from the best classic movie bloggers in the business.
The photo above shows Claude Rains, Paul Henreid, Humphrey Bogart, and Ingrid Bergman in a scene from Casablanca (1942).

So far, 2020 has been a challenging year for pretty much every person in the world. Many people are seeking comfort in the companionship of family and friends  through learning a new hobby, or by catching up on all the books, movies, and TV shows that they previously didn't have time to watch. I've been enjoying increased TCM time (I'm loving TCM's star of the month tribute to Edward G. Robinson) and reading some classic movie books I've had on the shelf for awhile (I highly recommend The Movie Musical! by Jeanine Basinger and We'll Always Have Casablanca: The Life, Legend, and Afterlife of Hollywood's Most Beloved  Movie by Noah Isenberg). 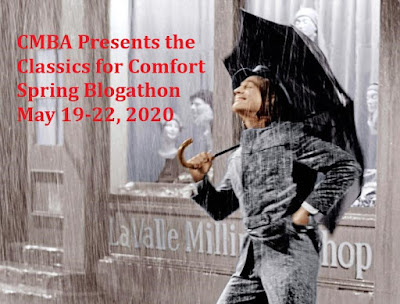 I and my fellow writers at the Classic Movie Blog Association hope you'll take some time this summer to watch at least one or two classic movies. With that in mind, I've compiled a list of five great movies to match your stay-at-home mood.

I Need a Good Laugh

A Night at the Opera (1935): We all need a little more happiness these days, and the best place to go for a good old-fashioned belly laugh is old Hollywood movies. There are literally hundreds of old Hollywood comedies that will tickle almost anyone's funny bone, but for this blogathon I've chosen the Marx Brothers 1935 classic A Night at the Opera.
This movie is best-remembered today for the famous stateroom scene (watch here), but there's lots more good stuff, including Chico and Groucho debating a "sanity clause" and Harpo and Chico turning a stuffy performance of Il Trovatore into joyous anarchy. Also, straight lady Margaret Dumont is at her imperious best as society lady (and object of Groucho's affections) Mrs. Claypool, and Harpo's lovely harp solo is a balm for the weary soul.
A Night at the Opera is available on DVD and video on demand.

My Roommate Is Driving Me Crazy

The Odd Couple (1968): Most of us are spending more time at home, which can actually be a source of added stress for some people. If your significant other/roommate/family member is getting on your nerves , then you can take comfort in the classic comedy The Odd Couple about two divorced men -- compulsive neat freak Felix (Jack Lemmon) and self-confessed slob Oscar (Walter Matthau) -- who share a NYC apartment.
The film, which is an adaptation of Neil Simon's Broadway play, hones in on how two people who care deeply about each other can still drive each other crazy. The movie's central message is that we all have to give a little to maintain any relationship; e.g. if Felix tolerates a little clutter and a few baseball games then Oscar will be on time for meatloaf night. I tend to be a little more of an Oscar (my clutter is organized!), but I do agree with Felix that there's nothing worse than dry meatloaf.
The Odd Couple is available for streaming  for DirecTV subscribers. Also available on DVD and video on demand.

I Need a Good Song

Yankee Doodle Dandy (1942): Many old Hollywood films are joy machines, which makes it easy to forget that most were made during the Great Depression and World War II. Yankee Doodle Dandy, the biopic of Broadway showman George M. Cohan (Oscar winner James Cagney), was released during the darkest days of World War II and its patriotic songs and can-do optimism lifted the spirits of a nation filled with uncertainty for the future and anxiety for the young men who were going off to war.
Cohan certainly knew his way around a toe-tapping, flag-waving tune, but the film's greatest asset is Cagney, whose endless charisma and boundless energy fills the screen and then some. He sells every song like his life depends on it, and, as viewers can tell, has a grand time doing it.
Airing at 5:30 pm ET July 4 on TCM. Also on DVD and video on demand.

I Need to Get Away

To Catch a Thief (1955): Travel is pretty much off this year, but if you're looking for a virtual vacation, watch director Alfred Hitchcock's stylish thriller about a string of jewelry thefts on the French Riviera.
The plot is mostly fluff (this film is not made with the clockwork precision of other Hitchcock whodunits). Instead, To Catch a Thief is mostly an excuse to watch beautiful people in beautiful clothes flirt stylishly in the Mediterranean sunshine (there's also fireworks, if your neighborhood Fourth of July celebration is canceled). Grace Kelly's Edith Head-designed wardrobe is to die for, but Cary Grant's unbelievably perfect tan is a real work of art (I'm mostly joking, but To Catch a Thief was peak Cary. Just LOOK 👀 at him in the photo above: Sheer perfection).
To Catch a Thief is streaming on Amazon Prime. Also available on Blu-ray, DVD, and video on demand.

I Need a Reminder of What's Important

Casablanca (1942): Casablanca remains one of old Hollywood's great films because it is so eternally relevant. This stylish World War II thriller about a group of refugees who frequent a Moroccan watering hole is a powerful tribute to the "Greatest Generation," many of whom gave up their future, their romances, and even their lives so future generations could be free from fascism and tyranny.
World War II ended 75 years ago and we live in a very different era than the 1940s, but Casablanca's timeless message still resonates. During these difficult days, I hope you'll watch Casablanca, and, as you go about your day, I hope you'll think about Rick and Ilsa and the gang sometimes and remember that (1) Nazis are always a bad idea, (2) doing what's right is better than doing what's easy, and (3) true friendship is worth its weight in gold.
Casablanca is airing at 8 pm ET Saturday, May 23 on TCM. I'll be live-tweeting along at https://twitter.com/oldhollywood21 Also on DVD and video on demand.

Thank you for reading. I hope you'll watch at least one of the movies that I or the other bloggers recommended. Stay safe and well, everybody, and remember, there's no place like home.