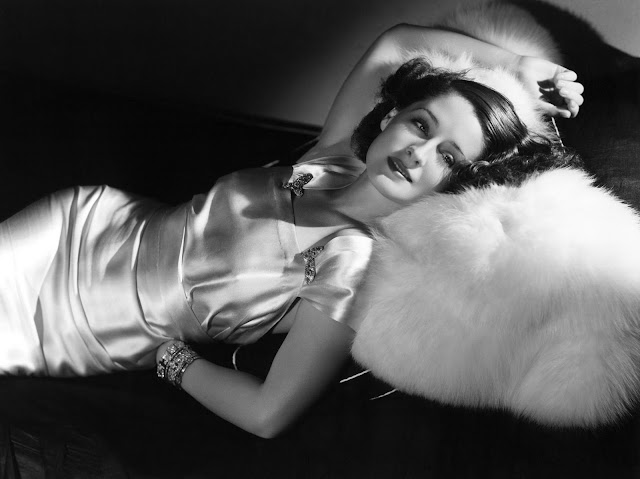 This article is part of the 2020 O Canada! Blogathon hosted by Speakeasy and Silver Screenings. Click on the highlighted text for more great articles about our neighbors to the North.

In the 1930s, MGM's roster of actresses included Greta Garbo, Joan Crawford, and Myrna Loy, but the undisputed queen of old Hollywood's most glamorous studio was Montreal-born Norma Shearer, who delighted her loyal (mostly female) fans in a series of modern melodramas and lavish costume dramas that made her a box-office sensation for much of the decade. Shearer is best-known today for her role as a spurned wife in the all-female comedy The Women (1939), but she deserves to be remembered for her entire body of work, which includes several films that serve as touchstones for Hollywood's treatment of the lives of women.

Norma Shearer was born Aug. 11, 1902 (or thereabouts*), to construction business owner Andrew Shearer and his wife, Edith. Norma grew up in posh surroundings with her brother, Douglas (later a pioneering MGM sound technician) and sister, Athole. However, the Shearer family's comfortable life fell apart in 1918 when Andrew lost his construction business and the family ended up living in dingy boarding house in a bad part of town. At this point, Edith decided to pack up her family (minus Andrew, who suffered from mental health problems) and take a chance on Norma's budding show-business aspirations.

In 1920, Norma, Edith, and Athole arrived in New York City with hope in their hearts and a letter of introduction to Broadway impresario Florenz Ziegfeld in Edith's pocket. However, Norma's petite frame** didn't fit into the mold of the statuesque showgirls favored by Ziegfield and other theatrical producers, and soon the three Shearers were living in a squalid tenement that was much worse than anything they had experienced in Montreal. However, Norma did find work in the nascent movie industry, where her plucky spirit and ability to work long hours in difficult conditions soon earned her small parts in films.

In 1923, movie mogul Louis B. Mayer saw Norma in a small part and invited her to come to Hollywood for a screen test. After a few false starts, including a disastrous screen test and clashes with directors, Norma was called into Mayer's office for a tough-love session with her fellow countryman*** (Mayer's modus operandi with talent usually involved a mixture of yelling and crying). Mayer's pep talk was so inspiring that Norma immediately went on the set of a film called Pleasure Mad and aced her big emotional scene. "I took that scene lock, stock, and barrel, fur, fins and feathers," she later remembered.

Norma met producer Irving Thalberg when she first arrived in Hollywood. They eventually became romantically involved and married on Sept. 20, 1927. Their union was a happy one and the Thalbergs had two children, Irving Jr. and Katharine. At around this time, Thalberg also began guiding has wife's career. His acting advice and uncanny knack for knowing what kinds of films would suit Norma's talent soon made her a top box-office draw at the newly formed MGM studios.

Although Thalberg had a substantial influence on Norma's career, it's important to note that Shearer was already a major movie star before their marriage. She was the female lead in MGM's first-ever production, He Who Gets Slapped (1924), which led to a string of successful silent films, including the hugely entertaining Lady of the Night. In this melodrama, Norma has a dual role as the daughter of a judge and a reform school graduate from the wrong side of the tracks (I did not know you could "graduate" from reform school, but apparently Norma passed with flying colors) who both fall in love with the same man (Malcolm McGregor). The plot is a bit creaky, but Norma does well in both roles (her emotive style of acting was particularly suited to silent films) and she looks fabulous throughout the film (as you can see from the photo above, reform school Norma (at right) has a killer wardrobe).  Lady of the Night is available on DVD.

Norma was one of the first MGM stars to make the transition to sound films. Pre-code Hollywood often dealt with risque (for the time period) subject matter such as divorce, adultery, and unwed motherhood that perfectly suited Norma's persona as a glamorous free spirit who, despite her wild ways, is also searching for true love and happiness. Norma's loyal fans crowded into movie theaters to cry, laugh, and sigh along with their favorite movie star in films like The Divorcee (1930), Private Lives (1931), and Riptide (all with frequent costar Robert Montgomery).
My favorite pre-code Shearer film is A Free Soul in which Norma plays the independent daughter of a trial lawyer (Oscar winner Lionel Barrymore) who dumps her devoted but boring fiance (Leslie Howard) for the dubious charms of her father's gangster client (Clark Gable, who exudes sex appeal in his breakthrough role). A Free Soul is available on video on demand.

Like many a movie mogul before and since, Thalberg wanted to see his lady love in "prestige" productions. During the mid-1930s, Norma starred in several costume dramas, which proved to be a mixed bag at the box office. Romeo and Juliet (1936) was a dud, but Smilin' Through (1932) and The Barretts of Wimpole Street (1934) were notable successes.

Norma's biggest screen triumph was her starring role in Marie Antoinette, a lavish biopic about the doomed French queen that earned Shearer a final Oscar nomination. Norma looks amazing in the intricate replicas of 18th century gowns, but her acting is even better, especially her portrayal of the queen's harrowing final days. (Some of Norma's costumes weighed around 100 pounds. It is a testament to her grit and professionalism that she could stand up, let alone, act in those clothes). Marie Antoinette will air at 4:45 am ET May 5, 2020, on TCM. Also available on DVD and video on demand.

After Thalberg's tragic death in 1936,† Shearer's roles diminished at MGM. Her most notable film during this period is the all-female comedy The Women. Norma plays a devoted wife and mother who must fend off her husband's interest in the illicit advances of a conniving department store clerk (Joan Crawford in peak man-eater mode)and the gossip of her society friends (most notably, a motor-mouthed Rosalind Russell).

Shearer has earned a spot in Internet-meme immortality thanks to the famous "jungle red"scene (watch here), but she is actually quite good throughout the film. Director George Cukor coached Shearer to tone down her more artificial and emotive acting techniques; in consequence, Norma's more subtle performance as a spurned wife and devoted mother has resonated with generations of female fans. The Women will air at 10:45 pm ET April 21, 2020, on TCM. Also available on Blu-ray, DVD, and video on demand.

Shearer made three more films for MGM before retiring from the screen in 1942†† Shearer continued to be part of Hollywood's social scene, but she increasingly led a private life, preferring to spend time with her family and her second husband, ski instructor Martin Arrouage. Norma passed away on June 12, 1983, at age 80.

I'll leave you with this lovely picture of Norma on the ski slopes. Be sure to check out the other articles in the blogathon. There's a few more write-ups on Norma and her films. 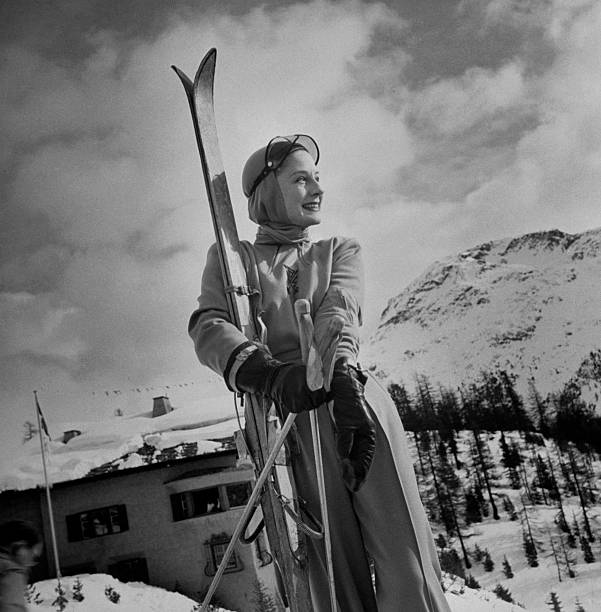 Footnotes
* The date and year of Shearer's birth are disputed: Shearer's The New York Times obituary gives several options, but there is a baptismal record that gives her birth date as Aug. 11, 1902.
**Norma had a slight case of strabismus in her right eye, which she worked for years to correct through visits to medical experts and muscle-strengthening exercises.
***Mayer was born in what is today the Ukraine, but he grew up in New Brunswick.
† Thalberg had congenital heart problems throughout his life. He died of pneumonia on Sept. 14, 1936, at age 37.
†† Shearer's NYT obituary states that Thalberg left Shearer a $4.5 million fortune at his death.