Anatomy of a Scene: The Wedding in The Sound of Music (1965) 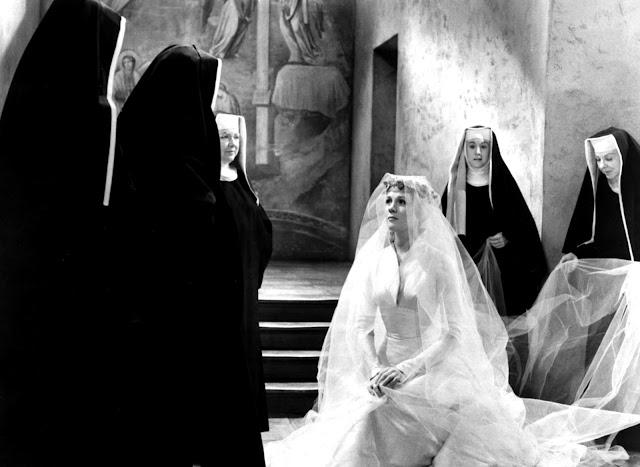 This article is part of The Wedding Bells Blogathon hosted by Hometowns to Hollywood. Go here for more great articles on the movies' most memorable nuptials.

I've watched The Sound of Music (1965) an embarrassing number of times, but no matter how much I cue up the DVD player, I'm always blown away by the beauty of the wedding scene. It's a wonderful example of the technical skills of old Hollywood's craftspeople, the lilting loveliness of Richard Rodgers' score, and the grandeur of the Austrian Alps. In this article, I'll look at four reasons why this scene works so well, but first here's a little background. 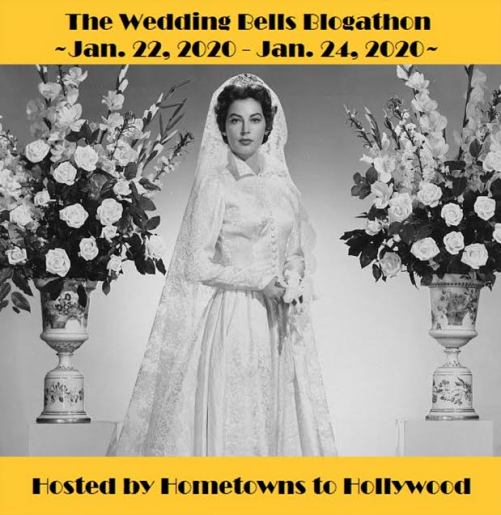 Unless you've been living in a cave for the last 55 years, you are aware that The Sound of Music is a musical version of the life story of Maria von Trapp, who is played by Julie Andrews in the film. Maria is a novice nun in Salzburg, although the impetuous young woman would rather take long walks in the Alps than say her prayers. The troublesome Maria is packed off to be the governess to the seven children of widower Captain von Trapp (Christopher Plummer), and the pair begin a romance involving pine-cone pranks, folk dancing, and marionettes that culminates in a wedding fit for royalty (or at least old Hollywood royalty). Here's a clip of the scene.
\


The von Trapp family were already internationally famous by the time The Sound of Music went into production in the spring of 1964 thanks to concert tours, albums, two biographies written by Maria, two German-language films, and, of course, the Tony Award-winning Broadway musical on which the film was based (the Trapp Family Singers repertoire mostly consisted of classical music and Austrian folk songs. You can give a listen to their beautiful harmonies and look at pictures from eldest daughter Agathe here) . However, no one involved with making the film expected it to achieve such spectacular numbers at the box office ($286 million and counting) let alone win five Academy Awards including best picture and best director and go onto be a pop-culture phenomenon that inspired countless memes, parodies, and Pinterest message boards.

If you can't wait for the next  TV airing of The Sound of Music to get your Edelweiss fix, you can catch it on Blu-ray, DVD, and video on demand. Disney+ and DirecTV subscribers can watch the beloved musical on those streaming services. No matter how you watch, here's to four things to look for in the wedding scene.

Screenwriter Ernest Lehman had the idea to broaden the scope of the intimate musical version by filming on location in Austria. The von Trapps were actually married at Nonnberg Abbey in Salzburg, but for the film a former Benedictine Abbey in the small town of Mondsee was chosen. The extremely difficult task of lighting the large, ornate church fell to cinematographer Ted McCord; it took two days to achieve the effect of sunlight streaming into the medieval building while Andrews walks down the aisle. McCord's efforts were well worth it with the Abbey's majestic surroundings creating a fairy-tale atmosphere that simple couldn't be duplicated on a studio sound stage (Wisely, McCord didn't include closeups of the skeletons of saints that are displayed in the altar, but if you want to get a look, click here).

Costume head Dorothy Jeakins designed Maria's simple yet elegant silk gown and accompanying veil. Andrews and Jeakins became good friends during the filming and Andrews has often reminisced with fondness about the gown. "That dress was a miracle," she later said. "I've never felt prettier before or since." The high collar and fitted waist are quite typical of '30s fashion while the fuller skirt was more on-trend for '60s bridal wear. In fact, the dress has a striking resemblance to the gown worn by Princess Margaret at her 1960 wedding to Antony Armstrong-Jones (take a look-see here).
It must be said that Plummer also looks quite dashing in Naval uniform, although he thought he looked like "Orson Welles" because he had been over-indulging in Salzburg's famed pastry shops.

Andrews walked down the aisle to "Maria," which arranger Irwin Kostal transformed into a dignified march (the clip above shows the lilting comic version heard in the first part of the film). Rodgers soaring melody fills the cathedral during the ceremony -- there isn't any dialogue during the wedding sequence; it was filmed in silence and the score added in later -- while Oscar Hammerstein II's wryly comic lyrics provide a wonderful counterpoint to Maria's transformation from a teenage "will of a wisp" to a dignified married woman (there's some confusion from YouTube commenters who happened upon the clip of the wedding ceremony as to why someone would be called a "clown" on their wedding day 😕). 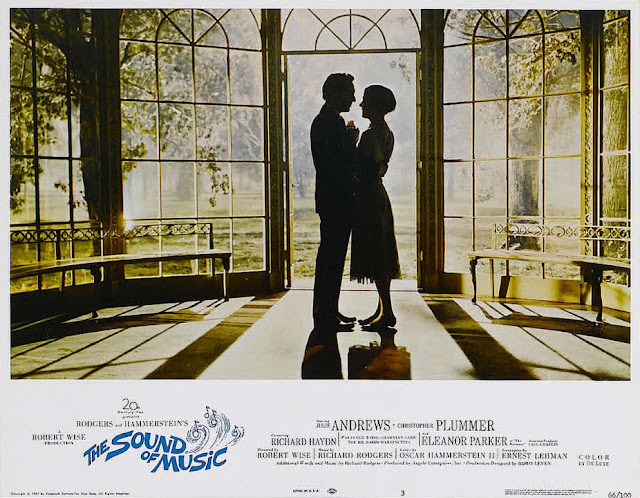 The Sound of Music's timeless message of love for family and country has made it a pop-culture phenomenon for the last 55 years. Maria's story is also a powerful touchstone for many women. Maria follows a traditional path of marriage and motherhood in The Sound of Music, but she is also unapologetically herself throughout the course of the movie. Her problems at the abbey and as a governess mirror some women's struggles to find their place in a society that tells them to sublimate their own needs and diminish their own personalities in order to conform.
There's no doubt The Sound of Music serves up a heaping helping of schmaltz, but one of the reasons I think it is so mocked is because both the real Maria von Trapp and the film's more sanitized version of her character are forces of nature who will "climb every mountain" and ignore anyone else's objections to fulfill their dreams (even if it does involve making clothes out of curtains).

Thanks for reading and thanks to Dr. Annette Bochenek for hosting! I'll leave you with the indomitable Reverend Mother (Peggy Wood, dubbed by Margaret MacKay) performing "Climb Ev'ry Mountain."