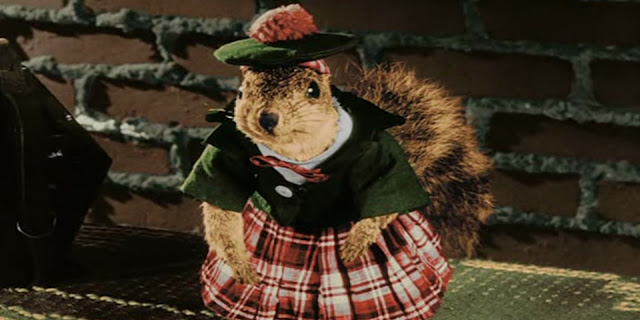 The Great Rupert (1950), a delightful holiday heart-warmer about a cute squirrel who becomes the unlikely benefactor for an impoverished family, is a great old Hollywood Christmas film to watch with your family.

The Great Rupert tells the story of the Amendola family, a trio of circus acrobats who are down on their luck after father and lead performer Louie (Jimmy Durante) injures his knees. The Amendolas arrive in a small town on Christmas Eve and manage to talk their way into renting a dingy one-room apartment that also happens to be the home of a fox squirrel named Rupert, an adorable, kilt-wearing rodent who also has a past in show business (Rupert's owner, played by Jimmy Conlin, has left town to earn extra money over the winter season). Rupert has the fortuitous habit of discarding large sums of cash stashed by a miserly next-door neighbor (Frank Orth) in the cubby hole that also happens to be Rupert's little home; however, the Amendolas don't know of Rupert's existence, and they believe that the money seemingly streaming from Heaven is the result of Mrs. Amendola's ardent prayers. 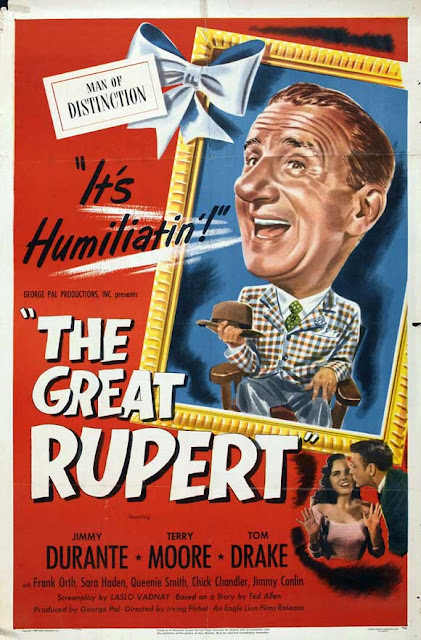 The Great Rupert is the first feature-length film from pioneering animator, producer, and director  George Pal. Pal was born in Hungary and achieved success as an animator in Germany, but he emigrated to the United Kingdom in the mid-1930s when the Nazis came to power. After coming to Hollywood in 1939,  Pal began making the Puppetoon shorts, a series of elaborate stop-motion animation films that earned him widespread acclaim and an honorary Academy Award. Eventually, the high cost of production meant it was unfeasible for Pal to continue making Puppetoons, so he decided to turn to a live-action feature film that integrated an animated character into the plot.

Pal zeroed in on an original screen story by Ted Allan that allowed Pal to use stop-motion animation in a few key scenes while Durante and Terry Moore and Tom Drake as a pair of star-crossed lovers do most of the heavy lifting in advancing the movie's feel-good plot. The film does use real squirrels in some scenes, but most of the action is done by a puppet, including Rupert's cute little dance and the hilarious scenes where he throws $100 bills out of the cubby hole. In fact, the Rupert puppet was so lifelike that Pal received several letters from viewers who wanted to know how to train a squirrel to give away buckets of cold hard cash (it seems hard to believe in this digital age, but it was not uncommon for those who lived through the Great Depression to keep large sums of cash hidden in their homes. Many people lost a great deal of money in the stock market crash of 1929 and/or the subsequent bank failures, which made them leery of entrusting their earnings to financial institutions).

The modestly budgeted film was a surprise hit, even warming the heart of the usually crusty The New York Times critic Bosley Crowther who gave it a very positive review. Crowther did ding the low budget, writing "The whole thing looks as though it were filmed and edited within the time that might usually be devoted to the making of a short" before adding "there is a wholesome ingenuousness about t[SIC]—a brisk enthusiasm—that makes it unimpeachable. Talk about good, cheap 'family pictures.'" NYT subscribers can read the entire interview here.

Ironically considering the movie's plot, The Great Rupert's box-office success was a financial windfall for Pal. The money he made from the film's unexpected success allowed Pal to launch his successful career as a producer/director of science-fiction and fantasy films like The War of the Worlds (1953), The Time Machine (1960), and The Wonderful World of the Brothers Grimm (1962).

The Great Rupert, which is sometimes known as A Christmas Wish, is still a holiday favorite for both those who remember watching the film on TV as children, and old Hollywood fans who are looking for a feel-good holiday film for the family. If you're up early on Christmas Eve, you can catch The Great Rupert at 5:30 am ET on TCM, It is also available on DVD and on the streaming service The Film Detective, which has a computer-colorized version you can watch via the Internet (link here), an iOS app or streaming device like Roku, Apple TV, and Amazon Fire TV.

I'll leave you with this fun clip of Durante performing "Jingle Bells" in his signature style. Merry Christmas to all!