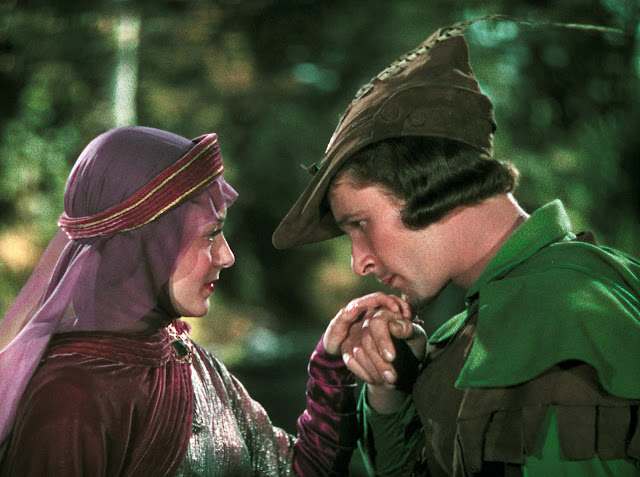 This article is part of The Fourth Annual Olivia de Havilland Blogathon hosted by Phyllis Loves Classic Movies and In the Good Old Days of Classic Hollywood.  Click on the links to read more great articles about Ms. de Havilland and her films.

There are thousands of widely available movies to choose from these days, which can make it hard for film buffs to decide what to watch when they sit down in front of the TV or turn on the computer. With that in mind, I'm going to occasionally give readers five reasons to watch a particular old Hollywood film. My first choice is The Adventures of Robin Hood, the 1938 swashbuckler from Warner Bros. that is the third, and best known, screen pairing of director Michael Curtiz and stars Errol Flynn and Olivia de Havilland.

The Adventures of Robin Hood is the umpteenth retelling of the Medieval legend about a Saxon knight named Robin of Locksley, aka Robin Hood (Flynn), who fights the injustice and oppression of the Norman overlords in 12th century England. Robin and his band of merry men are busy "robbing from the rich and giving to the poor," when a chance encounter with Lady Marian Fitzwalter (de Havilland), the ward of the imprisoned King Richard I (Ian Hunter), leads to a romance between the beautiful aristocrat and dashing outlaw.

The Adventures of Robin Hood started out as a vehicle for Warner Bros. No. 1 star James Cagney. However, when the defiant actor walked out during one of his many contract disputes, studio executives decided to give the project to the team of Curtiz, Flynn, and de Havilland, who had already scored major box-office successes with pirate saga Captain Blood (1935) and the 1936 action-adventure film The Charge of the Light Brigade (click on the highlighted text to read my previous blogathon entries on these two films). The result was a massive hit that raised audiences's spirits during the Great Depression and World War II, and continues to delight moviegoers around the world to this day.

You can watch The Adventures of Robin Hood at noon July 13th on TCM or catch it on Blu-ray, DVD, or video on demand. Here's my five reasons why you should put it on your summer-movie list.


1. The Definitive Screen Version of the Robin Hood Legend

In the last two decades, Robin Hood has become something of a pop-culture staple, appearing in everything from Shrek (2001) to Doctor Who, not to mention a couple of not very successful movie reboots.

However, these new-fangled Hoods can't hold a candle to the old Hollywood original. Douglas Fairbanks' 1922 version is certainly worth seeking out for classic movie fans, but The Adventures of Robin Hood is still the gold standard for films about the famous outlaw. It placed several tropes in the public consciousness such as the outlaw's penchant for forest-green garb and the sometimes over-the-top antics of Robin's adversaries (see Alan Rickman's gloriously hammy performance in the otherwise horrible Robin Hood: Prince of Thieves-1991).

The Adventures of Robin Hood is a visual feast thanks to its glorious color cinematography. The photography process used for this film is called three-strip Technicolor, which provides bright saturated colors that don't fade over time. This gives 21st century viewers breathtaking views of the Southern California locales used in the making of the film (scenes were shot at Bidwell Park in Chico, Calif,  Busch Gardens, and the Warner Ranch in Calabasas, Calif., among other places) and Milo Anderson's brightly colored costumes.
De Havilland's wardrobe  is stunning throughout, especially in the silver-and-purple dress with purple cape that she wears during the Sherwood Forest scenes, but my fashion winner is Basil Rathbone as Sir Guy of Gisbourne who, in one scene, has a green ensemble that perfectly matches his piercing eyes (as you can tell, I'm a bit of a Basil fangirl).

The Adventures of Robin Hood features some of old Hollywood's most beloved character actors. There's Alan Hale as Robin's boisterous wingman Little John and the always wonderful Eugene Pallette as the pleasingly plump monk Friar Tuck, but my favorites are Irish actor Una O'Connor as Marian's much-married maid, Bess, and English comic Herbert Mundin as the awkward Much, the miller's son. Their unlikely romance is one of the highlights of the film and proves that true love isn't just for the young and beautiful.

Every great old Hollywood film needs a great villain, and The Adventures of Robin Hood was lucky enough to have three top-notch baddies. Melville Cooper makes a wonderfully buffoonish sheriff of Nottingham and a bewigged Claude Rains is having the time of his life as the devious usurper Prince John, but the cream of Robin Hood's villainous crop is Basil Rathbone as the suavely sinister Sir Guy of Gisbourne. Rathbone and Flynn face-off in old Hollywood's greatest duel in the movie's exciting climax, but Sir Guy also has a way with dialogue and an eye for fashion (the coral and turquoise number he wears during the archery tournament is quite an eye-popper).

All of the Flynn/de Havilland films are wonderful in their own way, but The Adventures of Robin Hood is the best example of the magic they created on the silver screen. De Havilland and Flynn have real chemistry from the time he walks into a dining hall with a deer over his shoulders, and the pair bicker, flirt, and swoon in glorious Technicolor until they ride off together in one of the movies' happiest endings.

I'll leave you with this wonderful video of Marian sparring with Robin Hood's baddies (Olivia looks wonderful in her charteruse-and-silver ensemble, but once again the fashion winner is Basil in green and gold).


Many happy returns to Ms. de Havilland on celebrating another milestone. Best wishes for a wonderful 103rd year with her sweet buddy, Oscar. 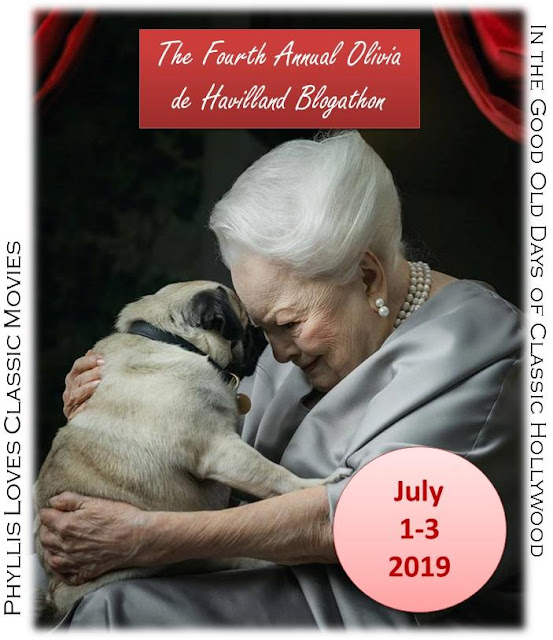