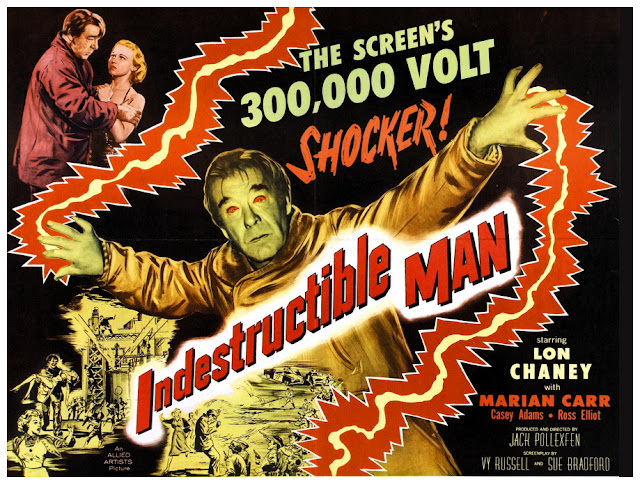 Summer is a great time to relax with a fun B movie from old Hollywood. The streaming site The Film Detective now has a great line-up of  drive-in classics that includes the film noir/monster movie mash-up Indestructible Man (1956) starring horror icon Lon Chaney, Jr., as a criminal who comes back from the dead.

Indestructible Man begins with tightly wound L.A. cop Dick Chasen (Max Showalter, billed here as Casey Adams) narrating the unusual tale of Charles "Butcher" Benton (Chaney), a convicted robber and killer who vows revenge on his crooked lawyer (Ross Elliott) and two associates (Marvin Press and Ken Terrell) before heading off to what everyone thinks will be his final moments in the San Quentin State Prison gas chamber.

However, Butcher's corpse falls into the hands of cancer researcher Dr. Bradshaw (Robert Shayne), who decides to go full-on Dr. Frankenstein by giving Butcher a chemical infusion and 287,000 volts of electricity (provided by General Electric in what was perhaps a bit of unintentional product placement). In no time, the now-mute Butcher (he lost his vocal cords in the electric shock) is careening around Southern California on his quest for revenge.


Indestructible Man was the brainchild of director, producer, and writer Jack Pollexfen, who made several low-budget films in the 1950s that were intended for the drive-in movie market. Indestructible Man, which was co-scripted by Vy Russell and Sue Dwiggins (billed as Sue Bradford), was based on several other noir and horror films, most notably Man Made Monster, which Chaney made for Universal Pictures in 1941. The movie was released by Allied Artists and often played with other low-budget movies at drive-in theaters across the U.S. Eventually, Indestructible Man made its way to TV where it became a late-night staple. The film was also featured on the popular parody show Mystery Science Theater 3000 in 1992.

Indestructible Man is now available to watch for free at the classic streaming site The Film Detective where they are billing it as "one of those movies you probably saw as a kid but can't remember the title." Somehow, I missed this one during childhood Saturday nights spent watching classic movies, but I nevertheless enjoyed the film for Lon Chaney's lead performance, the fascinating L.A. locations, and the references to other classic movies.

The son of horror icon Lon Chaney, Chaney Jr., followed his famous father into movies after the elder Chaney's untimely death in 1930. At first, Chaney struggled to find parts, but his breakthrough role as the lovable Lennie in Of Mice and Men (1939) made him a hot property in Hollywood, and the spectacular success of The Wolf Man (1941) cemented his status as a top horror star. By 1956, Chaney was alternating between playing character roles in prestigious films like High Noon (1952) and The Defiant Ones (1958) and appearing in low-budget monster movies like Indestructible Man.

Chaney (like everyone else involved with the film) certainly did the role for the money, but that didn't stop him from giving everything he had to the part. For most of the film, Chaney lumbers around L.A. like a more unkempt version of Frankenstein's monster, but he  has some memorable moments, such as calling his lawyer "a rotten, stinking mouthpiece" and the many closeups of his eyes that are used throughout the film.

Indestructible Man is notable for its fascinating glimpses of fifties L.A., including scenes filmed inside the historic Bradbury Building and several scenes filmed at the Angels Flight Railway (if you're not familiar with L.A., it's well worth Googling these two landmarks so you can spot them in the movie).

The film is also notable for its many references to other classic movies, which makes it a lot of fun for Old Hollywood fans. I spotted references to the Boris Karloff version of The Walking Dead (1936) in the executed criminal returns to life plot; Frankenstein (1931) in the laboratory scene; He Walked by Night (1948) and The Third Man (1949) in the sewer scenes, and, last but not least, White Heat (1949) in the movie's fiery climax.

I'll leave you with the trailer for Indestructible Man and best wishes for everyone to have a happy, classic-movie filled summer.

Visit https://thefilmdetective.tv/ to learn how to watch Indestructible Man.