The German Pilot in Mrs. Miniver 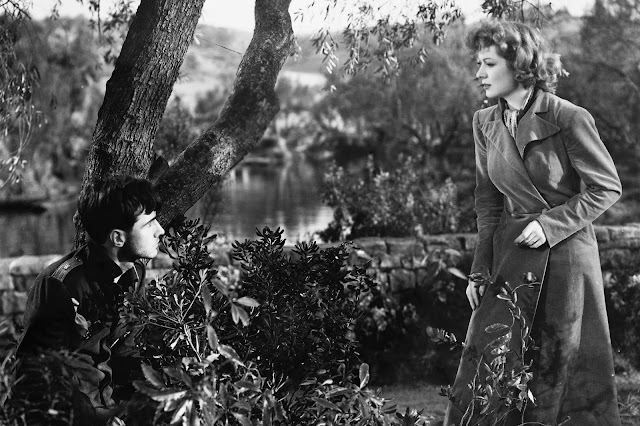 This article is part of The Great Villain Blogathon hosted by Shadows and Satin, Speakeasy, and Silver Screenings. The photo above shows Helmut Dantine and Greer Garson in a scene from Mrs. Miniver (1942).

Old Hollywood films feature many extraordinary villains whose outrageous deeds have both terrified and entertained viewers. However, the World War II homefront classic Mrs. Miniver (1942) gives audiences a brief glimpse of a different kind of bad guy: An ordinary German soldier (Helmut Dantine) whose unwavering belief in Nazi ideology made him capable of extraordinary evil.

The appearance of the German pilot occurs about halfway through Mrs. Miniver, when English housewife Kay Miniver (Greer Garson) encounters a wounded pilot in her garden. Her husband, Clem (Walter Pidgeon), is away helping in the evacuation of Dunkirk, and the pilot is able to quickly overpower Mrs. Miniver and demand food from her kitchen (you can watch part of the scene here). At first, Mrs. Miniver feels a bit sorry for the young man -- her eldest son (Richard Ney) is a pilot in the Royal Air Force -- but after he reveals himself as a fanatical Nazi, things quickly become tense. 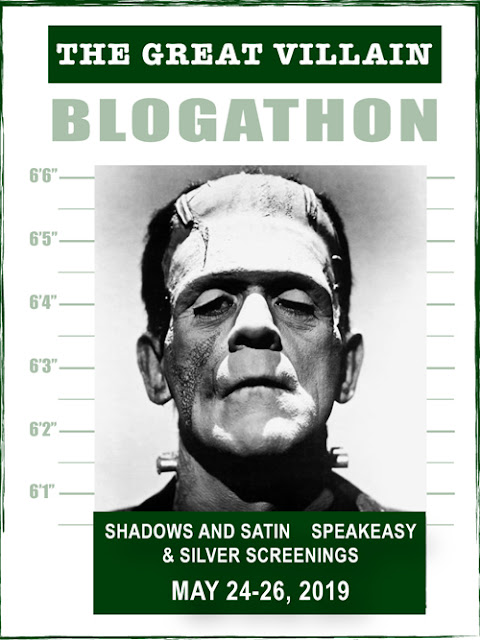 The scene between the German pilot and Mrs. Miniver is one of the best in the film, but it was controversial during the making of the movie. Mrs. Miniver was based on a series of newspaper columns by Jan Struther that was later turned into a best-selling book chronicling the lives of an ordinary English family during the early days of World War II. MGM chief Louis B. Mayer bought the screen rights, and the studio's writing department worked hard to turn the book's series of vignettes into a compelling narrative.

One of the incidents the writers added for heightened drama (it's not in the book) is an encounter between Mrs. Miniver and a German pilot. However, Mayer was uncomfortable with the scene, and he and director William Wyler had several heated exchanges. Both Mayer and Wyler were Jewish*, but Mayer didn't want to cut into MGM's lucrative European profits by offending Germans; for his part, Wyler was deeply opposed to Adolf Hitler and the Nazis, and one of the reasons he signed on to direct Mrs. Miniver was because he looked at it as a "propaganda film."

Mayer felt that the film should show the courage and heroism of the English people, but that the Germans should remain an off-screen presence. Wyler forcefully argued otherwise, telling Mayer, "I've only got one German. And if I make this picture, this one German is going to be a typical Nazi son of a bitch. He's not going to be a friendly little pilot but one of Goering's monsters**"

After the bombing of the U.S. Naval base in Pearl Harbor, Hawaii, Mayer relented and allowed the scene with the German pilot to stay in the film. Mrs. Miniver became a huge hit, winning six Academy Awards, including best picture, best director for Wyler, and best actress for Garson. The film was also praised by British Prime Minister Winston Churchill, who said it was worth "50 destroyers" to the British war effort, and President Franklin Roosevelt, who had a sermon and prayer from the film printed and distributed.

Mrs. Miniver wasn't the first old Hollywood film to expose the evils of the Nazi regime -- Confessions of a Nazi Spy (1939), The Great Dictator (1940), Meet John Doe (1941), and The Mortal Storm (1941) all preceded it -- but its powerful portrayal of an ordinary man twisted by a hateful ideology is unique among these films. The pilot, who is young, hungry, wounded, and frightened, is in many ways like Mrs. Miniver's own son except for his fanatical belief in the Third Reich and his willingness to kill innocent civilians.

For viewers in 1942, Mrs. Miniver was an eye-opening encounter with the brutality of the Nazi war machine. For viewers today, the movie also reveals much about the terrifying nature of ideology and the politics of personality. There has been much (deservedly) written about Hitler's persecution of the Jews and other minorities, but his reign of terror was also a terrible tragedy for the German people. They were seduced by the power of personality, stagecraft, and, in some cases, cinema***, to be complicit in murder and destruction on a scale unprecedented in human history. Hitler and his ilk were the architects of the Holocaust, but they had many Germans who were their willing foot soldiers in slaughter. These ordinary people became, in essence, the monsters that Wyler mentions^. 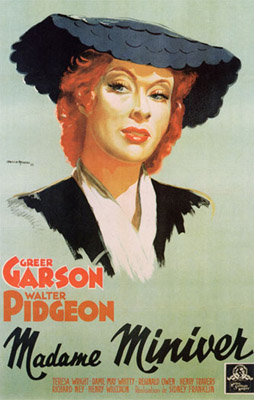 Often when watching Mrs. Miniver, I've wondered about the fate of those ordinary Germans like the pilot who were caught in a web of extraordinary evil. Did they look back and regret the horrible ideology they espoused and the terrible deeds they did for the Reich? Did they sometimes wonder, like Shakespeare's Macbeth, if they could "wash this blood clean from my hand?"

Footnotes:
All direct quotes are from Five Came Back: A Story of Hollywood and the Second World War by Mark Harris.
*Wyler was born in the Alsace region of Europe. During his childhood it was part of Germany, but today it is part of France. Mayer was born in what is now Belarus, but was then part of the Russian empire.
**Wyler is referring to Herman Goering, the supreme commander of the Luftwaffe, who orchestrated the bombing of England.
*** The works of director Leni Riefenstahl were both cinematic landmarks and effective propaganda macines for the Nazi regime.
^There were many Germans who opposed and spoke out against the Nazi regime. The most famous are old Hollywood icon Marlene Dietrich,  theologian Dietrich Bonhoeffer, college student Sophie Scholl, and Colonel Claus von Stauffenberg who led a plot to assassinate Hitler.