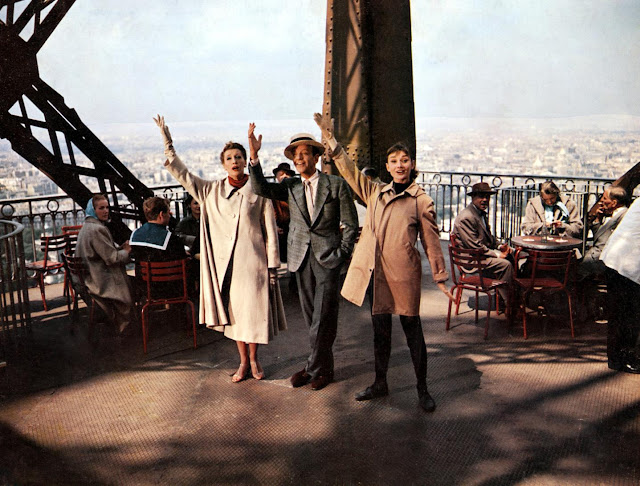 This article is part of the 5 Favorite Films of the '50s blogathon hosted by Classic Film & TV Cafe. Celebrate National Classic Movie Day on May 16th by reading more great articles here. The photo above shows Kay Thompson, Fred Astaire, and Audrey Hepburn waving on the Eiffel Tower in Funny Face (1957).

To celebrate National Classic Movie Day on May 16, Rick at Classic Film & TV Cafe has asked film bloggers to compile a list of our five favorite films of the 1950s. I found this task fiendishly difficult both because many of my all-time favorites were made in the 1950s  -- Sunset Boulevard, The Asphalt Jungle, All About Eve, Born Yesterday in 1950 alone -- but also because it was such a fascinating decade in old Hollywood history.

The '50s not only represented the zenith of the studio system when brilliant directors like Alfred Hitchcock, Stanley Donen, and John Ford were creating some of their finest work, but it was also the era of low-budget drive-in flicks that were designed to titillate audiences. For the first time since the silent era, foreign films began to make a sizable impact on audiences with art-house theaters in college towns across the U.S. showing films from France, Italy, and Japan.

I mentally went through about five or six different methodologies for compiling this list (should I do it by year? how about five great directors/five great films). In the end, I just decided to go with five films that I love. I hope you'll understand why these films are so special to me, and that you'll be inspired to watch at least some of them.

Funny Face combines three of my favorite things -- the music of George and Ira Gershwin*, the fashions of  Hubert de Givenchy, and Paris -- into one charming musical about a mousy bookshop clerk (Audrey Hepburn) who becomes the muse of a fashion photographer (Fred Astaire). To be honest, this isn't one of the "great" '50s musicals -- director Stanley Donen did much more innovative work in both Singin' in the Rain (1952) and Seven Brides for Seven Brothers (1954) -- but the film does have a shimmering fairy tale-like quality that makes it one of cinema's truly beautiful experiences. You can never go wrong with Hepburn clothed in gorgeous Givenchy couture while taking viewers on a virtual tour of the City of Lights. Blu-ray, DVD, and video on demand.

During the '50s, directors like Anthony Mann and Budd Boetticher made Westerns that dealt not only with issues of race and class, but also the anxieties of Postwar masculinity. Ironically, John Ford, the auteur of the American frontier, largely sat the decade out** until 1956, when he returned to Monument Valley to make this dark and lyrical masterpiece.
Love him or hate him, John Wayne's masterful performance as Indian hunter Ethan Edwards is quite stark for a top box-office star (it is also a direct contradiction to his later reputation as a conservative firebrand), but it is Ford's typically fluid camerawork that is the movie's real accomplishment. The final shot, (GIF above), perfectly captures Ethan as a man apart: Forever searching, forever alone. 8:30 am May 24 on TCM. Blu-ray, DVD, and video on demand.

No director had a better '50s output than Alfred Hitchcock. The Master Suspense began the decade by dabbling in film noir (both Strangers on a Train and I Confess are great examples of noir style) before embarking on a series of stylish thrillers that made him a household name. For my money, Rear Window (1954) is the purest example of Hitchcock's '50s style, but for this list I'm going with To Catch a Thief, which is a sentimental favorite from childhood days of watching classic movies on Saturday night.
This breezy caper is perfect escapist fare for a rainy afternoon. There's huge movie stars (Cary Grant and Grace Kelly literally set off fireworks) in stylish clothes, a sunny south of France locale, and an interesting, but not too taxing mystery that is laced with Hitch's trademark macabre humor. Streaming on Amazon Prime; Blu-ray, DVD, and video on demand.

Unlike the three previous movies on the list, Kiss Me Deadly isn't a comfort movie I watch on Saturday afternoons, but I greatly admire director Robert Aldrich's gutsiness in combining noir style with science-fiction tropes to create old Hollywood's most unexpected apocalypse.
Kiss Me Deadly has a little too much (mostly implied) violence for me, but there's also a deliciously seedy L.A. atmosphere, great character actors  (Juano Hernandez, Jack Elam, Fortunio Bonanova), and perhaps the greatest McGuffin in all of film (appropriately called "the great Whatsit"). Finally, there is the surreal final 30 minutes, which stretches the noir style to its very limits and beyond (I first caught this movie late at night on TCM, and the timeline of my reactions was: 1 "Love the camera angles!!! 😍" 2. "Why are they all sweating like that? 😰" 3. "This just took a weird turn 😕" 4. "That was the greatest thing I have ever seen in my life 👏"). Blu-ray, DVD, and video on demand.

Japanese cinema became a prominent cultural force in the 1950s, especially the work of directors Akira Kurosawa and Yasujiro Ozu, but for this list I've chosen a lesser-known film that I deeply love. Director Kon Ichikawa's first screen version of the children's novel, The Burmese Harp***, is a deeply moving anti-war film about one soldier's journey from a World War II private to Buddhist monk.
The Burmese Harp presents a much more human portrait of Japanese soldiers than the grinning villains in most old Hollywood war films, but it also deals honestly with the atrocities on both sides. The sensitive private (Shoji Yasui) at the center of the film is broken by the slaughter of innocent people and animals and the destruction of nature; at first, he runs away out of fear and horror, but  eventually he finds his way into a life of repairing the world that honors the dead and comforts the living. Streaming on The Criterion Channel. DVD.

I didn't mention any Doris Day films in my five favorites, but it would be remiss of me not to show my appreciation for the old Hollywood legend who passed away Monday at age 97. Here's Ms. Day singing "Secret Love" in Calamity Jane (1953), which won the Academy Award for best song and became one of the top hits of the decade.

*Funny Face isn't an adaptation of  the Broadway musical penned by the Gershwin brothers, but it does contain four songs from the play.
**Ford's only previous '50s Westerns were Rio Grande and Wagon Master both made in 1950. He made movies in other genres, most notably The Quiet Man (1952), throughout the decade.
***Ichikawa remade this film in 1986.