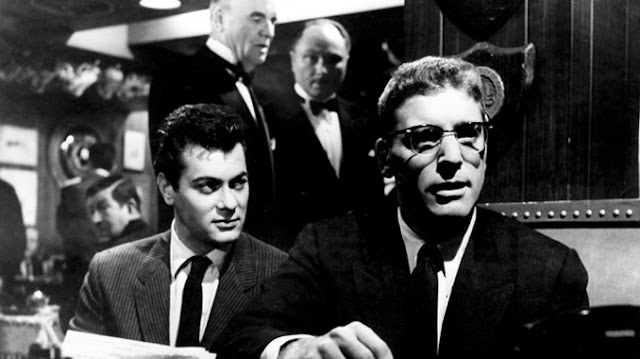 It's a great week for film noir on TCM. The Thursday night lineup of journalism-themed films has lots of great noir, including Sweet Smell of Success (photo above with stars Tony Curtis and Burt Lancaster. My other picks include a classic screwball from star-of-the-month Fredric March on Tuesday and a double bill from Irish-American director John Ford on Sunday. Note: All times are ET and the highlighted text has links to full-length articles.

Here's a link to the complete schedule for March 11-March 17.


Performance of the Week (Monday Daytime)

The Hunchback of Notre Dame (1939) at 4 pm Monday, March 11: Lon Chaney in the 1923 silent film was a hard act to follow, but Charles Laughton gives an equally great performance as the bell ringer Quasimodo in the 1939 adaptation of Victor Hugo's novel, Notre Dame de Paris. Like all great actors, Laughton used his own insecurities to create a touching portrait of a man who is ostracized by society because of his appearance. Part of a daytime lineup of films based on French literature. (you can watch Academy Award-winning director Guillermo del Toro's tribute to the film and Laughton's performance here).

Fred Astaire and Ginger Rogers are movie-musical perfection, but the actor and dancer also had many other great partners through the years. Monday night's lineup celebrates those women starting with the graceful Rita Hayworth in You  Were Never Lovelier (1942) at 8 pm. Also, don't miss Fred and Cyd Charisse's scorching rendition of "The Girl Hunt Ballet" in The Band Wagon at 10 pm and Astaire and Eleanor Powell practically tap-dancing through the floor in "Begin the Beguine" in The Broadway Melody of 1940 at midnight.

Photo of the Week (Tuesday daytime) 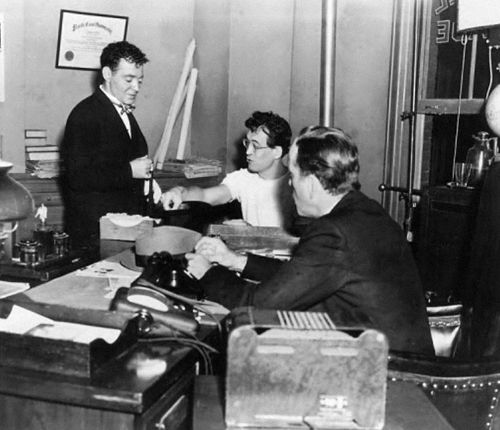 The Maltese Falcon (1941) at 2 pm Tuesday, March 12: Director John Huston gives pointers to Peter Lorre and Humphrey Bogart on the set of this seminal film noir. Part of a daytime lineup of detective stories.

Nothing Sacred (1937) at 10 pm Tuesday, March 12: Star-of-the-Month Fredric March plays a NYC newspaperman who gets taken in by small-town grifter Carole Lombard in this Technicolor screwball from director William Wellman. March mostly has to play straight opposite a hilarious Lombard (and an even more hilarious Charles Winninger) but he does get to show off his comedy chops in the famous fight scene.

TCM's afternoon lineup of Errol Flynn films brings the rousing action-adventure film The Charge of the Light Brigade (1936) at 1:45 pm Wednesday (this is Flynn's second film with frequent leading lady Olivia de Havilland) and the fun World War II thriller Desperate Journey (1942) at 6 pm. This film finds Flynn as the leader of flight crew that includes Alan Hale and Ronald Reagan who are shot down in Nazi Germany.


Wednesday Pick of the Day 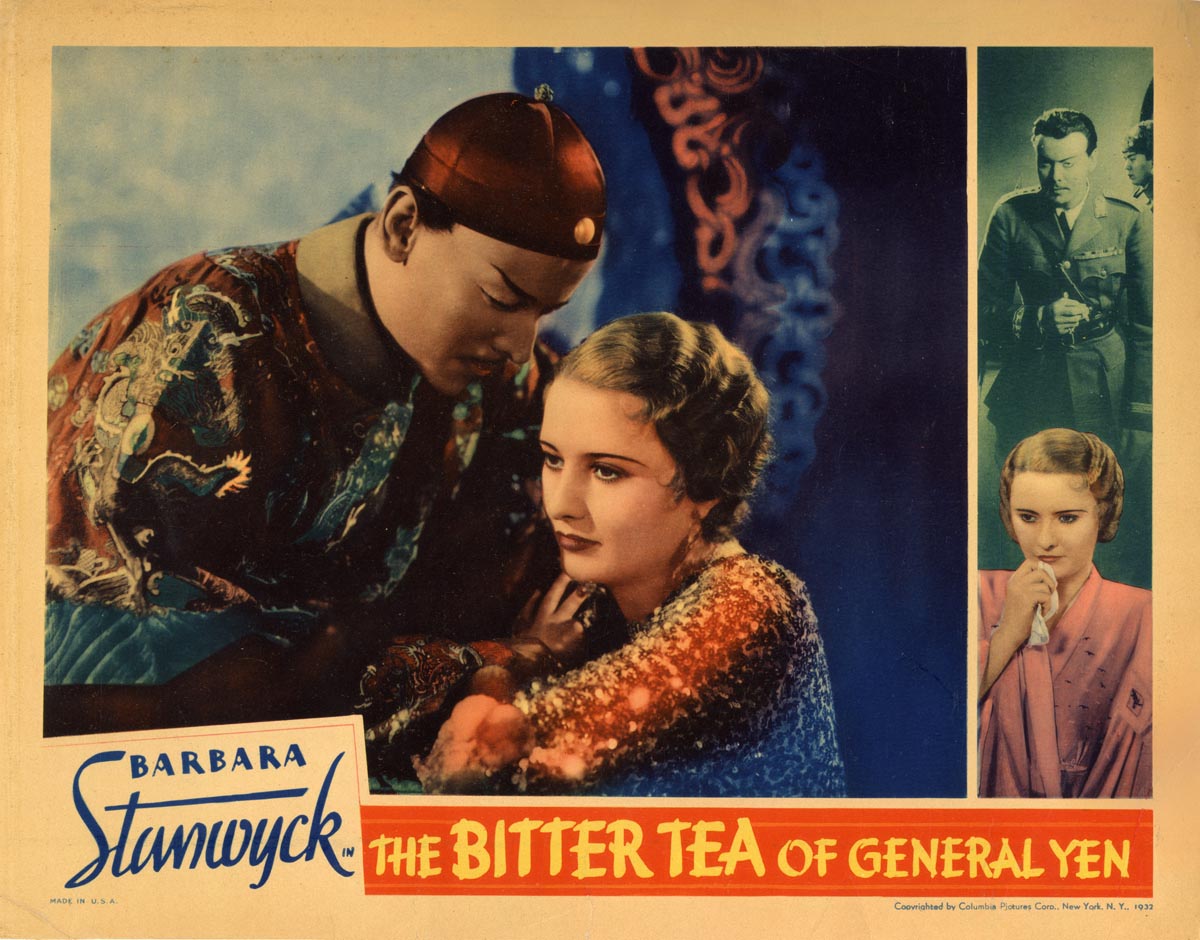 The Bitter Tea of General Yen (1933) at 8 pm Wednesday, March 13: This movie about an American missionary (Barbara Stanwyck) who falls in love with a Chinese warlord (Nils Asther) is probably the most unusual film in both Stanwyck and director Frank Capra's career. It was a huge flop at the time, partially because more conservative audiences disapproved of the frank depiction of the love affair between Stanwyck and Asher's characters, but it has gained a more appreciative audience in recent years with write-ups in prominent film journals.
More missionaries: I'm looking forward to seeing the James Michener saga Hawaii (1966) at 9:45 pm in its entirety (I've only seen about 20 minutes of this costume drama starring Julie Andrews and Max von Sydow). There's also Ingrid Bergman as real-life missionary to China Gladys Aylward in The Inn of the Sixth Happiness (1958) at 12:45 am and hypocritical preacher Walter Huston falling for Joan Crawford's dubious charms in Rain (1932) at 3:30 am.

Set Your DVR for Thursday prime time and late night

TCM's March spotlight on journalism in the movies brings a great lineup of films noir on Thursday night, starting with writer/director Billy Wilder's caustic Ace in the Hole (1951) at 8 pm Thursday about a cynical journalist (a fearless Kirk Douglas) who exploits a tragedy for his own gain. Next, certifiable columnist Burt Lancaster (GIF above) rules over NYC's entertainment industry in Sweet Smell of Success (1957) at 10:15 pm.
In late night, reporters John Derek and Donna Reed dig up dirt on their editor (Broderick Crawford) in Scandal Sheet (1952) at midnight; columnist Richard Conte tries to clear Anne Baxter's name in The Blue Gardenia (1953) at 1:30 am; Employees at a newspaper try to track down the elusive "Lipstick Killer" in the gripping thriller While the City Sleeps (1956) at 3:15 am. The extraordinary cast includes Vincent Price, Dana Andrews, George Sanders and Ida Lupino.

My Favorite Wife (1940) at 6:30 pm Friday, March 15: This delightful comedy of remarriage stars Irene Dunne as a shipwreck survivor who comes home to find her husband married to another woman (Gail Patrick). Grant's close friend Randolph Scott plays a hunky fellow castaway who reunites with Dunne. Part of a daytime lineup of films starring Grant and Scott.

Anne of Green Gables (1934) at 6:30 am Saturday, March 16: Anne Shirley plays the spunky Prince Edward Island orphan in this lovely adaptation of Lucy Maud Montgomery's novel. O.P. Heggie and Helen Westley are quite touching as Matthew and Marilla Cuthbert, the elderly brother and sister who adopt Anne.

Fort Apache (1948) at 10:15 pm Saturday, March 16: My sentimental favorite among director John Ford's cavalry trilogy (the other two films are She Wore a Yellow Ribbon and Rio Grande) this film stars Henry Fonda as a martinet commander who clashes with fellow officer John Wayne. Shirley Temple is quite charming as Fonda's teenage daughter.

High Sierra (1941) at midnight Saturday night/Sunday morning and 10 am Sunday: One of two 1941 noirs that made Humphrey Bogart an A-list star, this gangster drama is about an essentially decent ex-con who attempts a hotel robbery to raise cash for the surgery of a disabled girl (Joan Leslie). Ida Lupino is great as a moll who falls in love with Bogie. Also Bogart's dog Zero plays lovable mutt Pard in the film.

The Quiet Man (1952) at 8 pm Sunday March 17: It just wouldn't be St. Patrick's Day without TCM airing director John Ford's Emerald Isle-set romance. Most people watch for Maureen O'Hara's fiery performance as Mary Kate Danaher, but the glorious Technicolor cinematography in and around the village of Cong and Victor Young's lovely score, which includes Irish folk tunes, are also highlights. 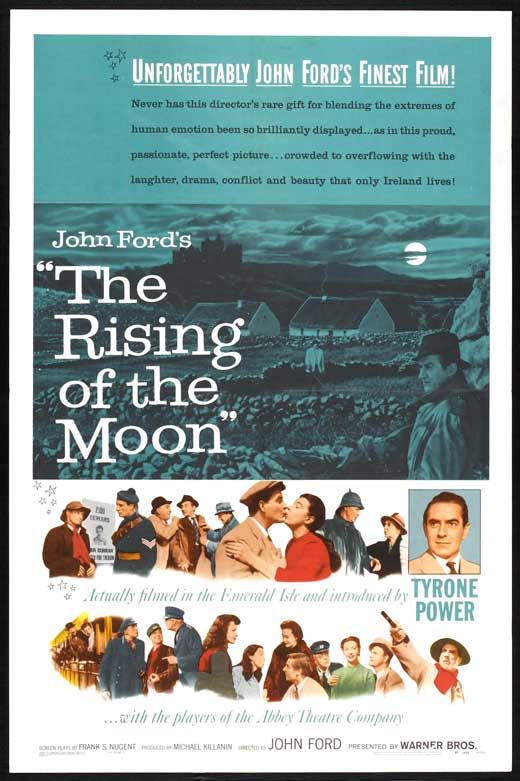 The Rising of the Moon (1957) at 10:30 pm Sunday, March 17: If you've already seen The Quiet Man 8,000 times (raises hand) then try this lesser-known Ford film set during the Irish War of Independence. Tyrone Power provides the narration.