TCM is celebrating its 25th anniversary this April with a blockbuster lineup of programming. First up, is a week-long tribute to old Hollywood icon Greta Garbo (photo above with Melvyn Douglas in Ninotchka), who was TCM's first ever star of the month. There's also birthday tributes to Debbie Reynolds on Monday and Spencer Tracy on Friday, plus the best of The Essentials on Saturday. Note: All times are ET and the highlighted text has links to full-length articles.

Here's a link to the complete schedule for April 1 through April 7. 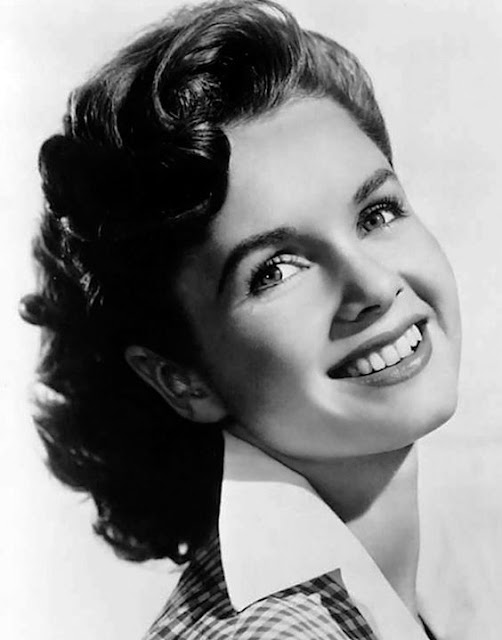 TCM is celebrating the April 1st birth date of the old Hollywood icon with a daytime lineup of her films. The best bet is Reynolds' performance as the spunky Titanic survivor in The Unsinkable Molly Brown (1964) at 11:30 am, but she's also wonderful opposite her Singin' in the Rain (1952) costar Donald O'Connor in the musical I Love Melvin (1953) at 10 am, with Tony Randall in the rom-com The Mating Game (1959) at 4 pm, and as the daughter of demanding mother-of-the-bride Bette Davis in The Catered Affair (1956) at 2 pm.

The first night of TCM's Greta Garbo tribute showcases her silent films. Garbo was an unknown 19 year old from Stockholm when the Swedish melodrama The Saga of Gosta Berling (1924) at 6 am Tuesday made her an international star (MGM chief Louis B. Mayer reportedly roared "Get me that girl" while attending a screening of Gosta Berling).

Garbo arrived in Hollywood in 1925, although, at first, MGM executives weren't sure what to do with the Swedish import (her uneven teeth and frizzy hair caused consternation in the hair and makeup department). Through sheer luck, Garbo landed the part of a peasant turned opera star in The Torrent (1926) at 8 pm Monday, which was a huge hit. Garbo cemented her superstar status by playing man-eating vamps in The Temptress (1926) at 9:45 pm, The Mysterious Lady (1928) at 11:45 pm, and The Kiss (1929) at 1:30 am. MGM did allow her to mix it up as a free-spirited debutante in The Single Standard (1929) at 2:45 am and as a bored businessman's wife in Wild Orchids (1929) at 4:15 am.

Performance of the Week (Tuesday daytime)

Of Human Bondage (1934) at 11:45 am Tuesday, April 2: Bette Davis made her name playing tubercular waitress Mildred Roger in this fascinating Somerset Maugham adaptation. Davis' fearless performance is still quite powerful, especially in the scene where a cruel Mildred berates Leslie Howard, who plays her upper-class admirer. Part of a daytime lineup of films about unrequited love.

Garbo's superstar status continued into the early talkies. She appeared in her fair share of potboilers like Romance (1930) at 8 pm Tuesday opposite Lewis Stone and Gavin Gordon and The Painted Veil (1934) at 2:45 am opposite Herbert Marshall and George Brent. Garbo also got the chance to vamp it up as the famous World War I spy in Mata Hari (1932) at 11:30 pm .During this time period, she also played one of her most famous parts: Disillusioned ballerina Grusinskaya in the all-star drama Grand Hotel (1932) at 9:30 pm .
The Divine Swede was cast against type as an innocent Michigan farm girl who runs away to join the circus in Susan Lenox: Her Fall and Rise (1931) at 1:15 am. Susan Lenox was Garbo's only screen appearance with her fellow MGM superstar Clark Gable.

Swashbuckler of the Week (Wednesday daytime)

Treasure Island (1934) at 6:15 pm Wednesday, April 3: Wallace Beery and Jackie Cooper team up for this fun adaptation of Robert Louis Stevenson's adventure classic about a famous pirate (Beery) who befriends a young boy. MGM's lavish production values and great character actors like Lionel Barrymore and Nigel Bruce make this movie a family-film treat. Part of a daytime lineup of movies about mutiny.

Legendary onscreen and off-screen couple Katharine Hepburn and Spencer Tracy are at their witty best in two films scripted by their friends Ruth Gordon and Garson Kanin: Adam's Rib (1949) airing at 12:30 pm Thursday and Pat and Mike (1952) airing at 2:15 pm.

Garbo and her leading man and rumored off-screen love interest John Gilbert made four films together. Their combustible chemistry practically burned down the screen in Flesh and the Devil (1926) at 8 pm Thursday and they continued their string of hits with Love (1927) at 10:15 pm, which was a modern version of Anna Karenina (MGM didn't want to damage the box-office appeal of their top team with Tolstoy's tragic finale, so they filmed an alternate happy ending and gave theater owners a choice between the two versions).
Garbo and Gilbert also appeared together in the silent melodrama A Woman of Affairs (1928) at midnight and the biopic Queen Christina (1934) at 1:45 am. 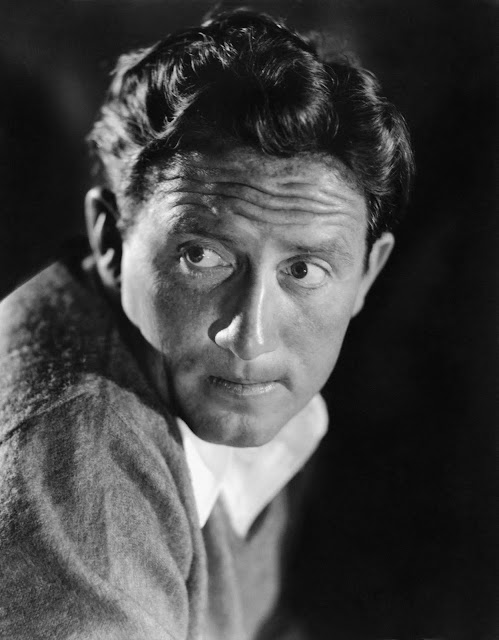 TCM is celebrating Spence's April 5th birth date with a lineup of his films that includes his Academy Award-winning role in Boys Town (1938) at 11 am Friday, buddy picture Boom Town (1940) at 2:45 pm with frequent costar Clark Gable, and World War II action-adventure Thirty Seconds Over Tokyo (1944) at 5 pm.

TCM's tribute to Garbo winds down on Friday with her final three films. First up is Conquest (1937) at 8 pm in which Garbo plays a Polish countess who uses her beauty to charm Napoleon Bonaparte (Charles Boyer) and save her homeland.
Next, director Ernst Lubitsch and co-screenwriter Billy Wilder helped Garbo remake her dour image in the delightful rom-com Ninotchka (1939) at 10 pm in which she plays a serious Soviet bureaucrat who learns to love (and laugh!) with the help of Melvyn Douglas. Garbo's last film was the so-bad-it's-fascinating screwball Two-Faced Woman (1941) at midnight, in which she plays her own twin sister in order to win back her straying husband (Douglas once again).

The Night of the Hunter (1955) at 10:15 pm Saturday, April 6: Director Charles Laughton's coming-of-age noir about two children (Billy Chapin and Sally Jane Bruce) who are hunted by an ex-con "preacher" (Robert Mitchum) was an overlooked film that has seen a revival of interest thanks to frequent airing on TCM. It's on Saturday night as part of the best of The Essentials programming that also includes East of Eden (1955) at 8 pm.

99 River Street (1953) at midnight Saturday night/Sunday morning and 10 am Sunday: Kansas City Confidential (1952) director Phil Karlson and star John Payne reunite for this gritty thriller about a cab driver who has to solve the murder of his cheating wife (Evelyn Keyes) to avoid being implicated in the crime.

Berkeley Square (1933) at 6 am Sunday, April 7: This intriguing fantasy film stars Leslie Howard as a modern man who is transported to 18th century London. A must-watch for Howard fans, this is also an intriguing choice for those who love Jane Austen novels and period dramas like Poldark. 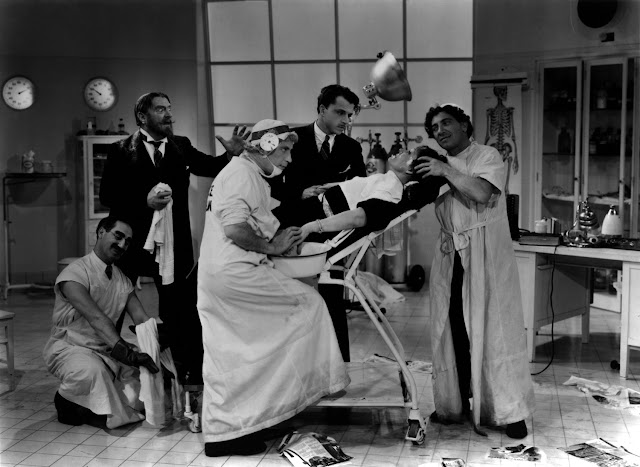 A Day at the Races (1937) at noon Sunday, April 7: If you're in need of a laugh this weekend, tune into this riotous Marx Brothers movie about a quack veterinarian (Groucho Marx) who becomes the doctor at an high-end sanitarium. There's lot of prime Groucho-Margaret Dumont action in this one, including the famous operating room scene (photo above).