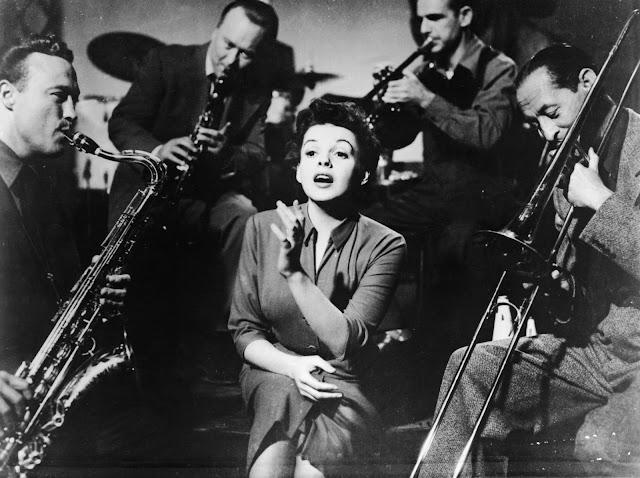 There's stars aplenty on TCM this week. The 31 Days of Oscar lineup has both the 1937 and the 1954 versions of A Star Is Born on Saturday night (the photo above shows Judy Garland performing "The Man That Got Away"), two Oscar winners from Spencer Tracy on Tuesday, and two films about much-married monarch Henry VIII on Wednesday. Note: All times are ET and the highlighted text has links to full-length articles.

A Free Soul (1931) at 12:15 am Monday, Feb. 18: This movie about a famous lawyer (Oscar winner Lionel Barrymore) whose daughter (Norma Shearer) gets mixed up with one of his gangster clients (Clark Gable in a star-making performance) is one of the best of MGM's pre-code melodramas. Barrymore's bravura courtroom scene, which almost certainly nabbed him the statuette, remains one of old Hollywood's unforgettable moments. Part of a late-night lineup of Oscar-winning performances from the Barrymore family.

The Best of the Rest for Monday

Khartoum at 10:45 am Monday, Feb. 18: This epic about a famous 19th century siege is one of a fascinating series of sixties films (Zulu, Lawrence of Arabia) that criticize British imperialism while at the same time buying into it. Laurence Olivier is all kinds of cringe as the Mahdi, but the rest of the cast does fine work, especially Ralph Richardson as Prime Minister William Gladstone, and the battle scenes are on a grand scale.

Ben-Hur (1959) at 4 pm: The Charlton Heston epics continue with this 11-time Academy Award winner about a Jewish nobleman who has a life-changing encounter with Jesus Christ.
High Noon (1952) at 8 pm:  This classic Western about a sheriff's lone fight against evil inexplicably lost the best picture Oscar to circus epic The Greatest Show on Earth, but it remains one of Old Hollywood's great morality tales.
None But the Lonely Heart (1944) at 2 am: The great actor Ethel Barrymore won her Oscar for a touching performance as Cary Grant's terminally ill mother in this drama about a Cockney drifter.


Tuesday Pick of the Day

The Little Foxes (1941) at 11 am Tuesday, Feb. 19: Bette Davis gives a fearless, Oscar-nominated  performance as a greedy Southern woman who will do literally anything to get her hands on her husband's money. Based on Lillian Hellman's Broadway hit, The Little Foxes received a total of nine Oscar nominations including best picture and best director for William Wyler. Part of a daytime lineup of movies about families.

Spencer Tracy became the second actor to win two Oscars in a row (the first was Luise Rainer) when he received consecutive best actor trophies for his performances as a charming Portuguese fisherman (clip above) in Captains Courageous (1937) at 8 pm Tuesday, Feb. 19 and as the idealistic Father Flanagan in Boys Town (1938) at 10:15 pm. 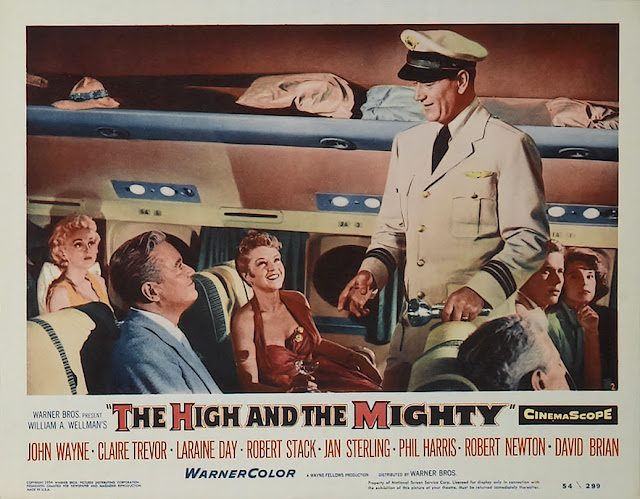 The High and the Mighty (1954) at 12:15 am Wednesday, Feb. 20: John Wayne is large and in charge in director William Wellman's Oscar-winning disaster flick. One of the most entertaining of the fifties blockbusters this movie features a great all-star cast (Claire Trevor, Phil Harris, Robert Newton), but nobody can quite top the Duke's he-man bluster.  Part of a night of 1954 best score winners.

The Private Life of Henry VIII (1933) at 8 pm Wednesday, Feb. 20: Oscar winner Charles Laughton shows off his feasting skills in this fanciful biopic about the much-married English monarch.

The Best of the Rest for Wednesday

Fury (1936) at 6:15 am Wednesday Feb. 20: Director Fritz Lang's first Hollywood film was the powerful tale of a lynch mob in a small town. Part of a daytime lineup of courtroom dramas.
12 Angry Men (1957) at 6:15 pm Wednesday: This all-time classic about a group of jurors who must decide the fate of a young man accused of murder is one of old Hollywood's great social-justice films.
A Man for All Seasons (1966) at 10 pm Wednesday: The clash between Henry VIII (Robert Shaw) and his chief minister (Paul Scofield) is told in this multiple Oscar winner.
Seven Brides for Seven Brothers (1954) at 3 am Wednesday: This toe-tapping musical was one of the best score winners for 1954. 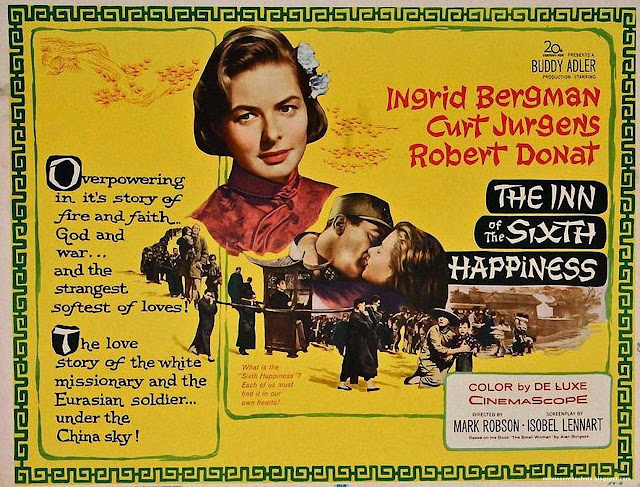 The Inn of the Sixth Happiness (1958) at 3:15 pm Thursday, Feb. 21: Oscar nominee Ingrid Bergman is transcendent in this biopic of Gladys Aylward, an English missionary to China during World War II. This film has one of the great tearjerker endings in old Hollywood history. Part of a daytime lineup of movies set in exotic locales.

Foreign Film of the Week

La Strada (1954) at 10:30 pm Thursday, Feb. 21: This foreign-language film Oscar winner about a young woman (Giulietta Masina) who becomes the companion of a circus strong man (Anthony Quinn) is perhaps the great Italian director Federico Fellini's most accessible film. It's fluid cinematography, haunting score, and focus on a typically marginalized female character are all quite similar to current Oscar nominee Roma. Part of a night of Fellini films.

The Yearling (1946) at 5:30 pm Friday, Feb. 22: This saga of Florida pioneer boy (Claude Jarman, Jr.) and his pet deer won Oscars for cinematography and art direction and received five more nominations. One of old Hollywood's great family films, The Yearling is a powerful reminder of both the gentleness and awesome power of nature. Part of a daytime lineup of films about animals.

The Best of the Rest for Friday

The Friday daytime lineup of animal movies brings Mighty Joe Young (1949) at 7:30 am stomping across Hollywood and a young Elizabeth Taylor dreaming of horses in National Velvet (1944) at 3:15 pm. Humphrey Bogart is brilliant as the unstable Captain Queeg in The Caine Mutiny (1954) at 11:15 pm. You can wrap up the evening with another Taylor movie: this time she's with husband and fellow sixties superstar Richard Burton in the Shakespeare's comedy The Taming of the Shrew (1967) at 4 am.

A Star Is Born (1954) at 10 pm Saturday Feb. 23: The fourth remake of this oft-told tale is making the rounds in this year's Oscar race, but it's still hard to top the 1954 version, which features Judy Garland as a talented nightclub singer who is discovered by an alcoholic movie star (James Mason). Garland gives a titanic lead performance, bringing down the house in "The Man That Got Away," "Born in a Trunk," and "Lose That Long Face."

A Star Is Born (1937) at 8 pm Saturday, Feb. 23: The 1937 original starring Janet Gaynor and Fredric March is also worth watch for its inside look at old Hollywood's star-making process (GIF above).

Captain Blood (1935) at 9:30 am Saturday, Feb. 23: Put off your weekend chores for a few hours, and settle down on the couch for this fun swashbuckler that was the first screen pairing for Olivia de Havilland and Errol Flynn. This movie is lots of old-fashioned fun with one of the great sword fights in old Hollywood history.

Noir of the Week

Key Largo (1948) at 3:30 am Saturday, Feb. 23: Edward G. Robinson gives his last great gangster performance in this noir about a Miami mobster who is trying to get to Cuba with a pile of counterfeit cash. Despite great work from Oscar winner Claire Trevor and an understated Humphrey Bogart, this is Robinson's movie; he dominates every frame he's in as the vicious, amoral Johnny Rocco. 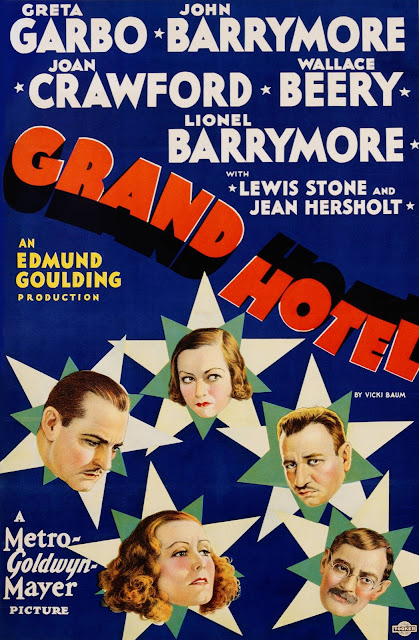 Grand Hotel (1932) at 10 pm Sunday, Feb. 24: MGM's all-star film about the various guests at a swanky hotel remains one of the landmark films of the 1930s. Greta Garbo's wounded ballerina is the movie's centerpiece, but Joan Crawford as a lonely-hearts stenographer is the real revelation. Part of a night of films of solo best picture winners.

The Best of the Rest for Sunday

Get in the spring mood with the delightful MGM musical Easter Parade (1948) at 7 am Sunday or pay a visit to the good folks of River City, Iowa, in The Music Man (1962) at 2:15 pm. Finally, there's the fascinating pseudo-documentary Eskimo (1933) at 2 am, which features location shooting in the Arctic and several Inuit actors.