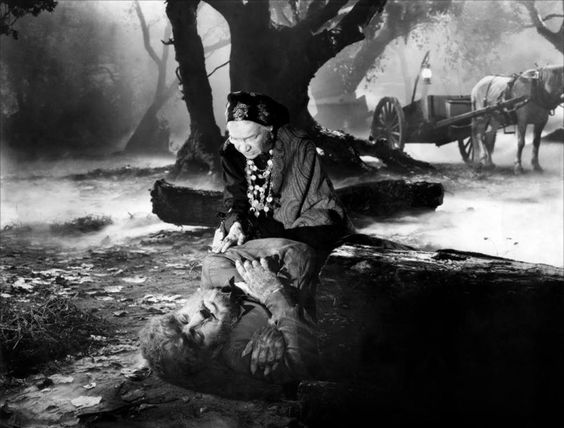 This article is part of  the What a Character! Blogathon hosted by Once Upon a Screen, Outspoken & Freckled, and Paula's Cinema Club. The photo above shows the great character actor Maria Ouspenskaya with Lon Chaney, Jr., in a production still for The Wolf Man (1941).

Maria Ouspenskaya's magnificently eerie performance as fortune teller Maleva in The Wolf Man has endeared her to generations of old Hollywood horror fans, but the Russian-born thespian was an acting legend known for her amazing stamina and unrivaled dedication to her craft. In this article, I'll highlight four fabulous Ouspenskaya performances and where you can watch them, but first here's some background on her remarkable life.

Ouspenskaya was born on July 29, 1876 in Tula, which is an industrial city about 120 miles south of Moscow. Ouspenskaya was blessed with a beautiful soprano voice, but her family's chronic lack of finances meant that she couldn't afford to pay for singing lessons, so the young woman turned her passion for performance into a lifelong dedication to acting.

At first, Ouspenskaya took whatever jobs she could get, often joining theatrical troupes that toured the Russian Empire's remote provinces (Whenever any of her Broadway or Hollywood costars complained about their working conditions, Ouspenskaya would fix them with a hard stare and reply, "You should have toured Russia in the old days"). Eventually, Ouspenskaya became part of the prestigious Moscow Art Theatre, where she was renowned for her performances in the works of playwright Anton Chekhov.

When the Theatre toured the U.S. in 1924, Ouspenskaya defected, and despite her tiny physique -- Ouspenskaya never weighed more than 90 pounds, according to her The New York Times obituary -- and her thick Russian accent, she was soon earning raves on Broadway. The influential Times critic Brooks Atkinson wrote, "Maria Ouspenskaya has the voice and command of style that give the classics a purpose on the stage. What she does, despite her broken accent, might be the model for all the acting in the play."*

Ouspenskaya opened an acting studio in New York where she taught the methods she learned from Art Theatre founder Konstantin Stanislavski, but she still performed on Broadway. Ouspenskaya became legendary for her amazing stamina despite her tiny frame and delicate appearance. She once performed to rave reviews while suffering from pneumonia and running a temperature of 104 degrees Fahrenheit, although she downplayed the severity of her condition in an interview: "Does a soldier refuse to go into battle when he sneezes? I am an artist, and when you love what you do, you find the force and energy to do it through love and will power."

In 1936, Hollywood came calling. Ouspenskaya recreated her stage performance as Baroness von Obersdorf in the film version of Dodsworth, which earned her an Academy Award nomination for best supporting actress.

Ouspenskaya's second Oscar nomination came for her small but pivotal role as playboy Michel Marnet's grandmother in this sentimental romance. Most old Hollywood fans are more familiar with the 1957 remake, An Affair to Remember, but the original is perhaps the better film, in part because of Ouspenskaya's beautifully modulated acting. Her portrayal of a deeply religious, yet doting matriarch leaves an unforgettable impression. 6 am Feb. 14 on TCM; streaming at Amazon Prime and Film Detective; DVD.

The second old Hollywood version of this tragic romance stars Vivien Leigh as a fragile dancer whose life is effectively destroyed by her tyrannical ballet mistress (Ouspenskaya). In a year of great performances from character actresses (Jane Darwell in The Grapes of Wrath, Judith Anderson in Rebecca, Gale Sondergaard in The Letter) Ouspenskaya is still a standout for a nuanced performance that showcases both Madame Olga's cruelty and her dedication to her craft. 9:15 am Jan. 18 on TCM; video on demand; DVD.

Madam Tanya in Beyond Tomorrow (1940), dir. A. Edward Sutherland

This unusual fantasy finds Ouspenskaya as one of four good-hearted people  (the others are Harry Carey, C. Aubrey Smith, and Charles Winninger) who help two lonelyhearts (Richard Carlson and Jean Parker) find love during the Christmas season. A real treat at any time of year, this film makes especially poignant viewing during the holidays (have your hankies ready). 6 am Christmas Eve on TCM; streaming on Amazon Prime and Film Detective; DVD.

Ouspenskaya achieved screen immortality in this iconic horror film about a young English lord (Lon Chaney, Jr.) who is bitten by a werewolf. Even though she barely comes up to Chaney's chest, Ouspenskaya effortlessly dominates all her scenes in the film (clip above). She is an effective foil to Chaney who sometimes had a tendency to galumph his way through performances; in fact, their final scene together is quite touching. Streaming for DirecTV subscribers; video on demand; DVD and Blu-ray

Ouspenskaya kept busy throughout the 1940s, reprising her role as Maleva in Frankenstein Meets the Wolf Man (1941), playing a mythic queen opposite Johnny Weissmuller in Tarzan and the Amazons (1945), and she was part of the large cast of the small-town noir King's Row (1942).  She even tried her hand at Westerns in the B oater Wyoming (1947). Ouspenskaya retired after appearing in the romantic comedy A Kiss in the Dark (1949). Ouspenskaya died on Dec. 3, 1949, at age 73 after suffering from a stroke and severe burns due to a smoking-related fire at her apartment in Los Angeles.

I'll leave you with this lovely quote from The New York Times: "She became for American theatre [sic] and movie fans,  one of the most familiar and pleasing character actresses. Her accent, luminous eyes, Tatar features** and finished performances were often far more impressive than more widely advertised portrayals by more beautiful film stars."

Footnotes:
*This quote is part of Ouspenskaya's NYT obituary. The writer does not mention what play Atkinson was reviewing.
**The Tatars are an ethnic group who mostly live in what used to be the Russian Empire. Whether Ouspenskaya  was actually of Tatar descent or this is just a colorful description by the writer is unknown to me.