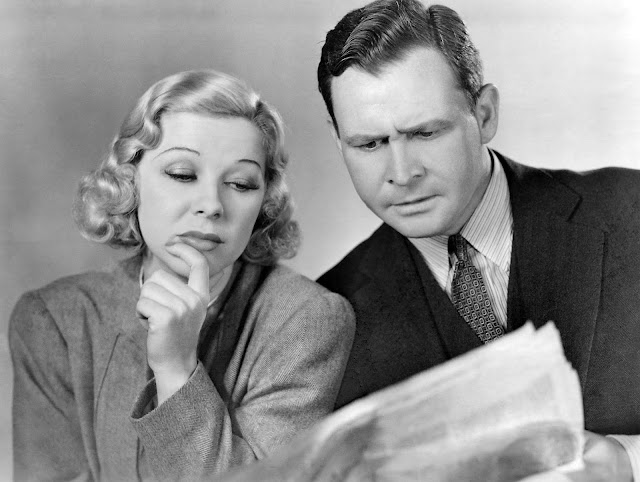 It's Torchy time this week on TCM! The network is airing all seven of the Torchy Blane films that star Glenda Farrell as the wisecracking reporter and Barton MacLane as her policeman boyfriend (photo above). There's also a Friday daytime lineup of Marlene Dietrich films and a Noir Alley selection starring Edward G. Robinson, Joan Bennett, and Dan Duryea. Note: All times are ET and the highlighted text has links to full-length articles. 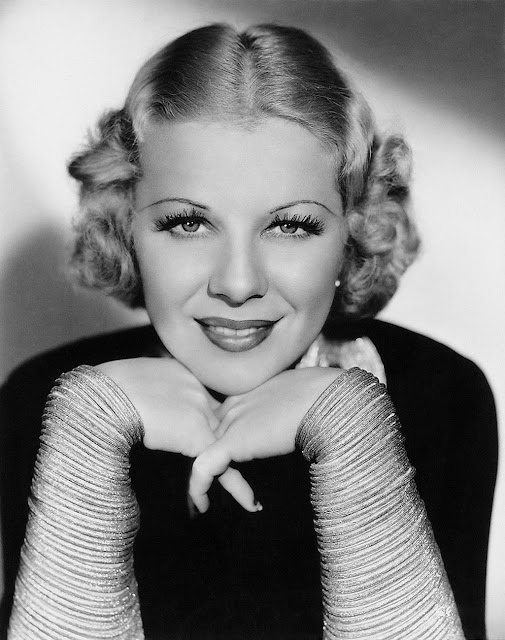 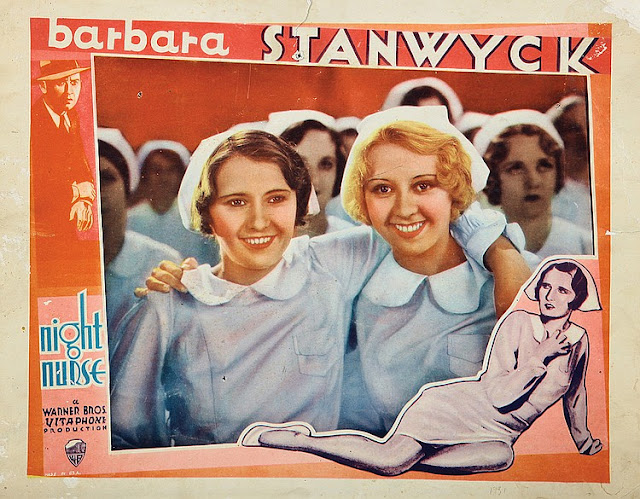 Night Nurse (1931) at 10:30 am Tuesday: TCM fan favorites Barbara Stanwyck and Joan Blondell play newly minted nurses who get an education in the seedy side of life in this William Wellman-directed melodrama that was considered quite risque in the early 1930s (as you can tell from the poster above, Stanwyck flashes her famous gams quite a bit). Also features one of Clark Gable's best early roles as a sadistic chauffeur. Part of a daytime lineup of movies about nurses
More women in white: Joan Crawford plays a private nurse who loses it over Van Heflin in the potent noir Possessed (1947) at noon followed by Frances Dee as a nurse who gets mixed up in Caribbean voodoo culture in the Val Lewton-produced chiller I Walked With a Zombie (1943) at 2 pm. Finally, Audrey Hepburn gives one of her best screen performances as a Catholic sister who begins to question her vocation in The Nun's Story (1959) at 5:15 pm.

Marty (1955) at 10:30 pm Tuesday: Many TCM fans know Ernest Borgnine for his villain and comic roles, but he also had a sensitive side, which was showcased in this Academy Award-winning drama. Borgnine deservedly won a best actor Oscar for playing a lonelyhearts Bronx butcher who unexpectedly finds love with a schoolteacher (Betsy Blair). Part of a night of films about the art of casting.

Another great cast: The night starts out with the 1951 version of A Streetcar Named Desire at 8 pm, which won Oscars for stars Vivien Leigh, Karl Malden, and Kim Hunter, not to mention the landmark performance of Marlon Brando as the brutish Stanley Kowalski. 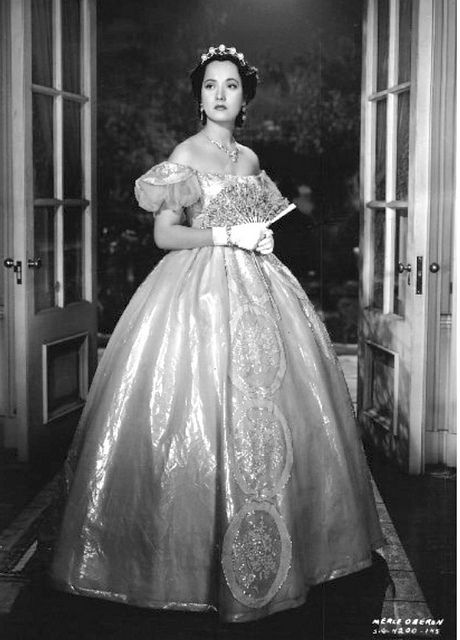 Wuthering Heights (1939) at 6 pm Wednesday: The 1939 adaptation of Emily Bronte's romantic novel about the doomed love affair between a brooding orphan (Laurence Olivier) and a mercurial Yorkshire woman (Merle Oberon) features some of old Hollywood's most gorgeous costumes. The hoop-skirted gowns designed by Omar Kiam are definitely not period appropriate -- Cathy would have died a lot sooner had she really been wandering around the moors in Kiam's shoulder-baring gowns -- but the gorgeous Oberon looks stunning nonetheless.

TCM is dedicating its Thursday daytime lineup to the suave English actor: Three great Sanders films airing in the morning are horror film The Picture of Dorian Gray (1945) at 6:15 am (Sanders plays a Victorian bon vivant who leads Hurd Hatfield into a life of sin), supernatural romance The Ghost and Mrs. Muir (1947) at 10 am (Sanders plays a caddish children's author who courts Gene Tierney), and the noir Lured (1947) at noon (Sanders plays a ladies man/theater producer who may be a notorious serial killer).

TCM's Friday lineup dedicated to the pioneering old Hollywood icon is chock-full of la Dietrich classics. The morning lineup features four of her films made with director Josef von Sternberg: The Blue Angel (1930) at 6:30 am; Shanghai Express (1932) at 8:30 am; The Scarlet Empress (1934) at 10 am, and The Devil Is a Woman (1935) at noon. The afternoon lineup starts out with the entertaining Russian Revolution drama Knight Without Armor (1937) at 1:30 pm (Marlene remains immaculately coiffed even when literally being chased by a horde of angry Bolsheviks) followed by the Arabian Nights fantasy Kismet (1944) at 3:30 pm, otherwise known as the film in which Dietrich is covered in gold paint. Finally, Marlene plays a bandit queen in the fun Western Rancho Notorious (1952) at 5:30 pm.

I consider myself something of an Anglophile, but until I went over this week's lineup, I was not familiar with George Formby, who was a superstar of British films in the 1930s. Formby started out as a popular musical hall entertainer, but he eventually moved to films where he often played naive bumblers in good-natured comedies like Trouble Brewing (1939) at 8 pm, Let George Do It (1940) at 9:45 pm, Keep Your Seats, Please! (1936) at 11:15 am, and No Limit (1935) at 12:45 am. Formby's films were also musicals, which feature him strumming his ukelele and warbling clever comic songs like "With My Little Stick of Blackpool Rock." Formby was a huge influence on later British comedians like Peter Sellers and The Beatles (there's a lot of George Formby-like moments in A Hard Day's Night).

Get Locked Up with Spencer Tracy and Bette Davis (Saturday, Nov. 17, prime time) 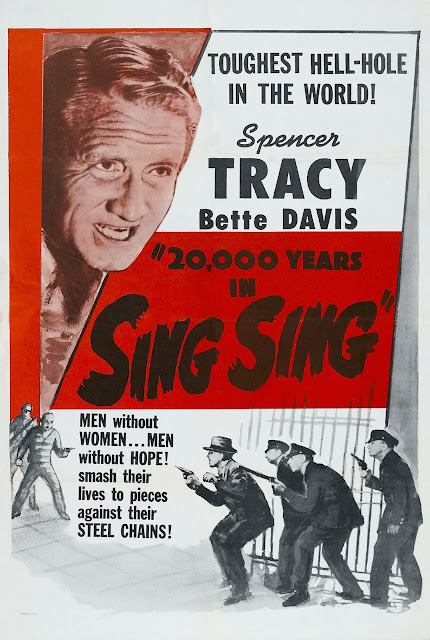 20,000 Years in Sing Sing (1932) at noon Saturday: The prison film was a popular genre in the 1930s, and this hard-boiled drama about a cocky criminal (Spencer Tracy) and the girl who loves him (Bette Davis) is still a potent piece of entertain 80-plus years later despite using every prison-movie trope known to man. 20,000 Years in Sing Sing also marks the only screen collaboration of Davis and Tracy.

Here Comes Mr. Jordan (1941) at 8 pm Saturday: Old Hollywood made a surprising number of films about the afterlife, including this Oscar-winning comedy about a boxer (Robert Montgomery) who is mistakenly sent to Heaven 50 years before his time. Montgomery gives an exceptional lead performance in which he manages to be funny while also playing three separate characters, but there's also a great supporting cast including Claude Rains as the supernatural title character, James Gleason as an increasingly frantic boxing manager, and national treasure Edward Everett Horton as a befuddled angel of death who is responsible for New Jersey (unsurprisingly, he wants a transfer).

The Woman in the Window (1944) at midnight Saturday night/Sunday morning and 10 am Sunday: This week's Noir Alley selection is director Fritz Lang's masterpiece about a nebbishy man (Edward G. Robinson) whose innocent attraction to a beautiful woman (femme fatale extraordinaire Joan Bennett) leads to a downward spiral of lust, murder, and self-loathing. This is the type of doom-laden noir that will scare you away from so much as jaywalking (also, if you see Dan Duryea coming, be advised that your once comfortable life is about to turn into the seventh circle of hades) 🔥🔥🔥.

Jezebel (1938) at 8 am Sunday: If you're not attending Sunday services (if you are, set your DVR) why not visit  the church of Bette Davis with her fiery, Oscar-winning performance as spoiled Southern belle Julie Marsden in this compelling antebellum movie that was Warner Bros. answer to Gone With the Wind (1939). Davis is so passionate that she even makes the audience "see" a red dress in black-and-white.

Get Ready for Thanksgiving with the Plymouth Adventure (Sunday, Nov. 16, prime time)

Plymouth Adventure (1952) at 8 pm Sunday: This MGM movie about the Pilgrims' journey to the New World isn't the most historically accurate depiction out there -- I doubt the Mayflower was a floating Peyton Place as depicted in the film -- but it does have a lot of entertainment value, including the soapy plot and Oscar-winning special effects.
More immigrants: Plymouth Adventure is followed by  America, America (1963) at 10 pm, director Elia Kazan's deeply personal film about a young Greek man's journey to the U.S. 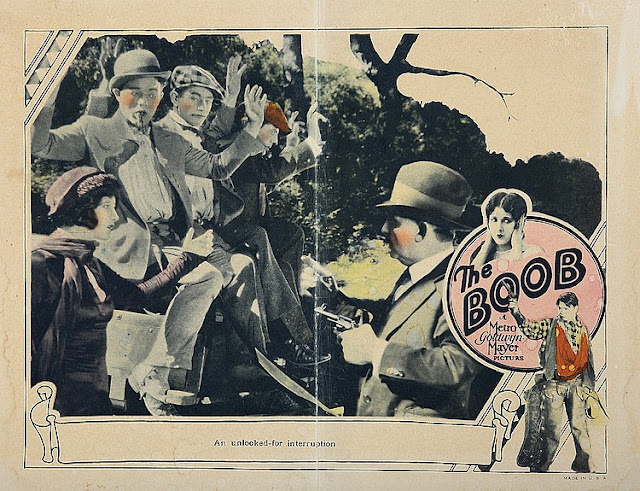 The Boob (1926) at 1 am Sunday night/Monday morning: This early comedy from legendary director William Wellman stars George K. Arthur as a bumbling country boy who chases bootleggers to impress his lady love (Gertrude Olmstead). Look for Joan Crawford in a small role as a lady revenue agent.