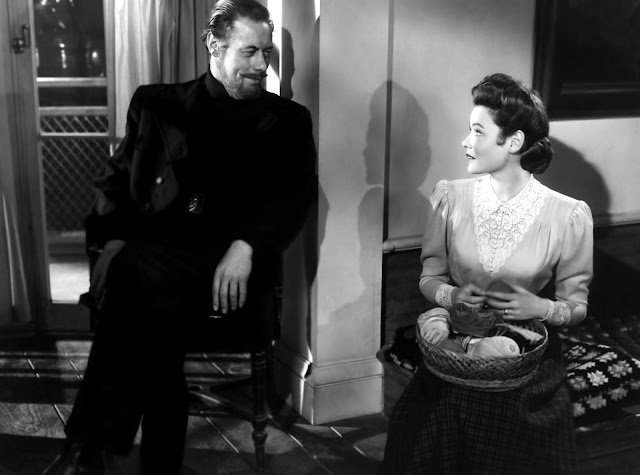 TCM has filled the week before Halloween with a great lineup of horror classics. There's a night of Frankenstein movies on Monday, a daytime lineup of afterlife adventures on Thursday, and fan favorite The Ghost and Mrs. Muir (1947) on Saturday night (the photo above shows Muir stars Rex Harrison and Gene Tierney). Note: All times in this article are ET and the highlighted text has links to full-length articles. 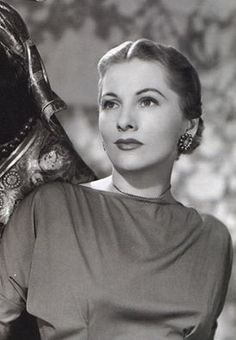 TCM is celebrating the life of this leading lady with a daytime lineup of her films. Fontaine was born Joan de Havilland on Oct. 22, 1917, in Tokyo. Fontaine, her mother, and her sister, Olivia de Havilland, moved to California when Joan was 2 years old. Like her sister, Joan pursued an acting career, landing a contract with RKO Pictures, where she often appeared in lightweight comedies like Maid's Night Out (1938) at 6:15 am and You Can't Beat Love (1937) at 7:30 am. Fontaine's big break came in the early 1940s when she appeared in director Alfred Hitchcock's classics Rebecca (not airing) and Suspicion (1941) at 6:15 pm, for which she won an Academy Award.
Fontaine continued to be a top star in the 1940s and early 1950s in films like the romance The Constant Nymph (1943) at 2:15 pm, the lavish costume drama Ivanhoe (1952) at 4:15 pm, and the soaper Born to Be Bad (1950) at 11 am, in which she played against type as a relentless schemer.
Later in her career, Fontaine took on supporting parts in the Mario Lanza musical Serenade (1956) at 8:45 am and the noir Beyond a Reasonable Doubt (1956) at 12:45 pm.

Son of Frankenstein (1939) at 9 pm Monday: Primarily known today as the movie where writer/director Mel Brooks got his shtick for Young Frankenstein (1974), this Universal Pictures horror film is one of the most entertaining movies ever to come out of the old Hollywood studio system. Boris Karloff plays the monster for the final time, but the real scene stealers are Bela Lugosi as the demented Ygor and Lionel Atwill as a one-armed police inspector whose limb was "ripped out by the roots" by the monster. If that isn't enough for you there's a dashingly handsome Basil Rathbone as Baron Wolf von Frankenstein.

More Frankenstein: TCM is airing an one-hour documentary The Strange Life of Dr. Frankenstein (2018) at 8 pm, plus the Hammer Films horror movie The Curse of Frankenstein (1957) at midnight, which stars Peter Cushing as Baron Frankenstein and Christopher Lee as the monster.

The Great Dictator (1940) at 5:45 pm Tuesday: Old Hollywood auteur Charlie Chaplin plays both a meek Jewish barber and an anti-Semitic dictator based on Adolf Hitler (called Adenoid Hynkel in the film)  in this dark comedy that both satirizes the ridiculousness of the Nazis (the moment where the microphones bend back during one of Hynkel's rants is still a hilarious sight gag) and a heartbreaking reminder of the cruelties inflicted on innocent people by the Third Reich. Part of a daytime lineup of dual roles.
More Double Trouble: Howard Keel is great as both a difficult TV star and a aw-shucks ranch hand in Callaway Went Thataway (1951) at 7:30 am. Red Skelton and Lucille Ball travel back to 18th century France in the stylish MGM musical Du Barry Was a Lady (1943) at 4 pm.

TCM is wrapping up its 100th birthday tribute to Hayworth with two of her best later roles. She and Burt Lancaster play a reuniting divorced couple in the Academy Award-winning drama Separate Tables (1958) at 8 pm while the under-rated courtroom noir The Story on Page One (1960) at 10 pm has Hayworth and Gig Young as two lovers who are accused of murdering her husband (Alfred Ryder).

TCM honors the horror icon Bela Lugosi with a great Wednesday night lineup of his films, starting with two of his best thirties efforts: the pre-code chiller White Zombie (1932) at 8 pm followed by yet another blood-sucking role in Mark of the Vampire (1935) at 9:15 pm. Fans of low-budget fare will want to set their DVRs for the cult classic The Devil Bat (1940) at 1:30 am about a demented cosmetic company chemist (Lugosi) who breeds giant bats to get bloodsucking revenge on his cheapskate bosses. A clearly frustrated Lugosi has to put up with Leo Gorcey and Huntz Hall's wisecracks in the East Side Kids horror comedy Spooks Gone Wild (1941) at 4 am.

Old Hollywood studios made a fare amount of films about the afterlife, including several great movies that are showing on Thursday on TCM. Charles Laughton hams it up delightfully as a 17th century ghost in the surprisingly touching wartime comedy The Canterville Ghost (1944) at 9:45 am while spirits Constance Bennett and Cary Grant wreak havoc in the life of stuffy banker Roland Young in Topper (1937) at 2:30 pm. Fake medium Margaret Rutherford accidentally summons the very real ghost of Rex Harrison's first wife (Kay Hammond) in the sparkling Noel Coward adaptation Blithe Spirit (1945) at 4:15 pm. A mysterious lady appears at an English estate in the costume drama The Woman in White (1948) at 6 pm.

TCM's Friday lineup of literary classics includes two of Katharine Hepburn's best-loved films of the 1930s: the adaptation of Louisa May Alcott's beloved novel Little Women (1933) at 2:15 pm and James Barrie's delightful Regency romance Quality Street (1937) at 4:30 pm. These films are followed by a documentary about Kate at 6:30 pm.

More literary adaptations: Vivien Leigh is excellent as the title character in the 1948 screen version of Anna Karenina at 10:45 am, while Anne Shirley (actor Dawn O'Day changed her name for this film) plays the spunky orphan from Prince Edward Island in Anne of Green Gables (1934) at 12:45 pm.

Grab a cup of tea and some cookies for MGM's atmospheric adaptation of Robert Louis Stevenson's horror novel Dr. Jekyll and Mr. Hyde (1941) at 2 pm. All-American Spencer Tracy is wildly miscast as the scientist with a dark side, but Ingrid Bergman, as a young woman who interests the lecherous Hyde, and MGM's first-rate production values are on point.
More Tracy: Tune in at noon for Tracy in a very different type of role. He won his first Oscar for his role in Captains Courageous (1937), as a gentle Portuguese fisherman who befriends a spoiled boy (Freddie Bartholomew).


The Ghost and Mrs. Muir (1947) at 8 pm Saturday: This charming fantasy from director Joseph L. Mankiewicz stars Gene Tierney as a young widow who moves into a seaside cottage only to find it haunted by the dashing ghost of a salty sea captain (a never-better Rex Harrison). One of old Hollywood's most unusual romances this films finds everyone at the top of their game, including Natalie Wood as Tierney's young daughter, Isobel Elsom and Victoria Horne as her in-laws, and composer Bernard Herrmann whose haunting score is justly famous in its own right.

Noir Alley, Oct. 27th edition
Follow Me Quietly (1949) at midnight Saturday night/Sunday morning and 10 am Sunday: This low-budget gem about the hunt for a bizarre serial killer who calls himself "The Judge" packs a lot of thrills into its 59 minute running time.  Very atmospheric -- the killer only comes out in the rain -- and there's a great final chase in a chemical plant. 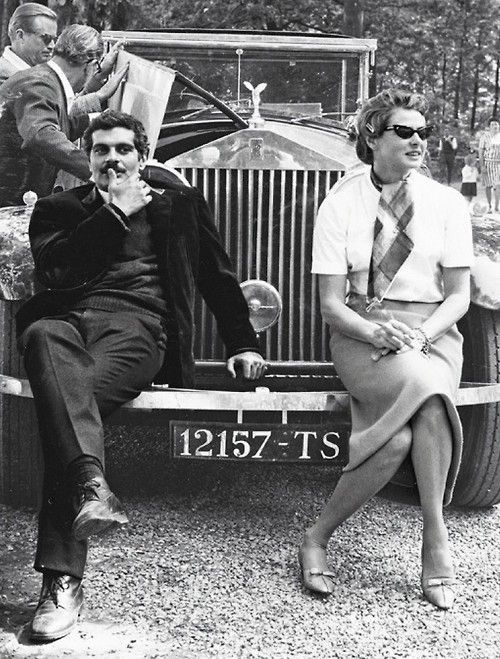 The Yellow Rolls Royce (1964) at 5:45 pm Sunday: Omar Sharif and Ingrid Bergman relax on the set of this delightful travelogue about three owners of a classic car. 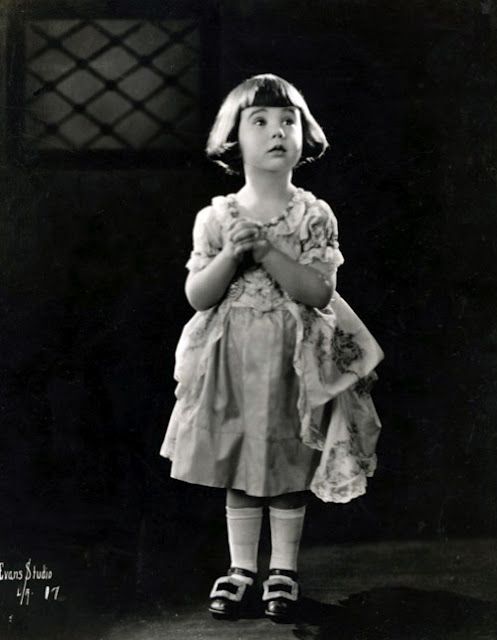 TCM is celebrating the 100th birthday of old Hollywood legend Diana Serra Cary, who was known to millions of silent film fans as the child star Baby Peggy, with a Silent Sunday Night tribute. The evening starts out with the 2011 documentary Baby Peggy: The Elephant in the Room at midnight Sunday night/Monday morning followed by three of her films: The Family Secret (1924) at 1:15 am, Captain January (1924) at 2:30 am, and Peg O' the Mounted (1924) at 3:45 pm.

Diabolique (1955) at 4 am Sunday night/Monday morning: This Hitchcockian thriller from French director Henri-Georges Clouzot about two women (Vera Clouzot and Simone Signoret) who plot to murder one's husband (Paul Meurisse) has one of the greatest scares in movie history.