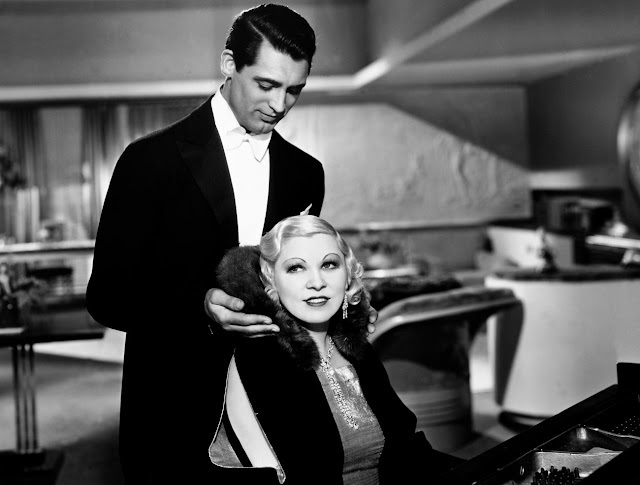 This first week of October on TCM is going to be a blockbuster for old Hollywood fans. There's a star-of-the-month tribute to Rita Hayworth on Tuesday night, a spotlight on funny ladies on Wednesday that kicks off with Mae West in I'm No Angel (the photo above shows West with costar Cary Grant), and lots of old Hollywood horror. Note: All times are ET and the highlighted text has links to full-length articles.

The intense English thespian was born Laruschka Mischa Skikne on Oct. 1, 1928, in Joniskis, Lithuania. Harvey's family eventually emigrated to South Africa. After serving in the army, Harvey went to London, where he studied acting and landed roles on stage, TV, and in British films. Harvey's performance in the Academy Award-winning film Room at the Top (1959) made him a top actor in Hollywood during the early 1960s. He appeared with longtime friend Elizabeth Taylor in Butterfield 8 (1960) at 3:30 pm Monday and in the family fantasy film The Wonderful World of the Brothers Grimm (1962) at 5:30 pm.

Lawrence of Arabia (1962) at 8 pm Monday: TCM is paying tribute to the pioneering work of editor Anne V. Coates on Monday by airing this epic film about the life of British Army officer T.E. Lawrence (Peter O'Toole). Coates' stellar work on the film includes the most famous match cut in movie history (GIF above).
More Coates: She also edited the stylish 1974 version of Murder on the Orient Express (1974) at midnight, which stars a host of old Hollywood legends, including Lauren Bacall, Ingrid Bergman, and Sean Connery.

TCM's daytime lineup of movies set in New York City features two great screwball-murder mysteries. First, San Franciscans Nick and Nora Charles (William Powell and Myrna Loy) head to the Big Apple for the holidays in The Thin Man (1934) at 1 pm Tuesday followed by Barbara Stanwyck playing a NYC debutante who has a nose for sleuthing in The Mad Miss Manton (1938) at 2:45 pm.

TCM is celebrating the 100th birth date of this flame-haired beauty (Hayworth was born Oct. 17, 1918, in Brooklyn) with a Tuesday night filled with her musical films. Here's the lineup:
You'll Never Get Rich (1941) at 8 pm: Hayworth was an up-and-coming ingenue at Columbia Pictures when she was paired with Fred Astaire, who had just ended his screen partnership with Ginger Rogers, in this musical about a G.I. who falls for a chorus girl.
You Were Never Lovelier (1942) at 9:45 pm: Columbia followed up You'll Never Get Rich with this charmer about an Argentine heiress (Hayworth) who falls for a dancer (Astaire). Fred and Rita burn up the dance floor on "The Shorty George."
My Gal Sal (1942) at 11:30 pm: Victor Mature and Hayworth make a great pair in this charming turn-of-the-century musical filmed in glorious Technicolor. Rita's costumes are to die for.
Only Angels Have Wings (1939) at 1:30 am: One of the Hayworth's first prominent roles was as the wife of disgraced pilot Richard Barthelmess in director Howard Hawks' aviation drama.
Blood and Sand (1941) at 3:45 am: Hayworth's first temptress role was as a sultry Spaniard in this bullfighting film costarring Tyrone Power and Linda Darnell.
The Strawberry Blonde (1941) at 6 am Tuesday: Hayworth is a gold digger who turns James Cagney's head in this TCM fan favorite comedy.

The Phantom of the Opera (1925) at 9 pm Wednesday: The great actor Lon Chaney was one of the most singular stars ever to come out of the old Hollywood studio system, creating a gallery of monsters, misfits, and con men whose humanity and dignity both touched and terrified audiences. Chaney's most famous role is as the title character in this silent horror film about a disfigured man who pines for a star of the Paris Opera (Mary Philbin).
More Chaney: The horror star is also great as an armless circus performer in The Unknown (1927) at 8 pm, a con man dressed as an old lady in The Unholy Three (1925) at 2:15 am, and the world's saddest circus clown in He Who Gets Slapped (1924) at 4 am.

Three Godfathers (1936) at 3:30 pm Thursday: Many TCM watchers are familiar with the 1948 John Ford-John Wayne version of this Christmas-themed Western, but it is a remake of two Harry Carey silents and this talkie that stars Walter Brennan, Chester Morris, and Lewis Stone as three bank robbers who discover a mother and infant in the desert. Harry Potter fans will note that Sidney Toler plays a character named Professor Snape.

Actor and filmmaker Illeana Douglas (she's the granddaughter of TCM fan favorite Melvyn Douglas) and TV legend Carol Burnett are hosting TCM's October spotlight on funny ladies, which is airing every Thursday night. You'll want to pop some popcorn and set your DVR for this week's lineup, which features comediennes of the 1920s and 1930s.
I'm No Angel (1933) at 8 pm: The night kicks off with the queen of pre-code comedy Mae West. Mae is in fine form as a singer who spouts off memorable one liners ("when I'm good, I'm very good, but when I'm bad, I'm better") and romances Cary Grant.
Dinner at Eight (1933) at 9:45 pm: Both Marie Dressler and Jean Harlow were versatile actors who had a flair for comedy. They're great in MGM's all-star comedy about a dinner party hosted by a high-society couple (Lionel Barrymore and Billie Burke).
College Swing (1938) at midnight: The underrated Gracie Allen stars as a ditzy young woman who is about to inherit a college if only she can graduate in time. This delightful musical comedy also stars Allen's husband, George Burns, Bob Hope, and comedienne Martha Raye.
Show People (1928) at 1:45 am: Silent star Marion Davies was often cast in melodramas and period pieces, but she had a real gift for comedy, which she shows off to great skill in this inside Hollywood comedy.
Fatty and Mabel Adrift (1916) at 3:15 am: The great silent comedienne Mabel Normand appears with her frequent costar Roscoe "Fatty" Arbuckle in this domestic comedy about a couple and their faithful dog who get literally washed away.
A Day at the Races (1937) at 4 am: The unofficial "fifth Marx Brother" Margaret Dumont is hilarious as the devoted patient of quack doctor Hugo V. Hackenbush (Groucho Marx).

The Lady Vanishes (1938) at 10 pm Friday: A night of films devoted to Margaret Lockwood includes this Hitchcock classic about a young woman who gets involved in the disappearance of an elderly lady (Dame May Whitty). The beautiful Lockwood and the dashing Michael Redgrave are great in the lead roles, but the cricket-mad friends Charters and Caldicott (Basil Radford and Naunton Wayne) really steal the show.
More Margaret: Lockwood is divine in both the World War II thriller Night Train to Munich (1940) at 8 pm and costumer The Wicked Lady (1945) at midnight. 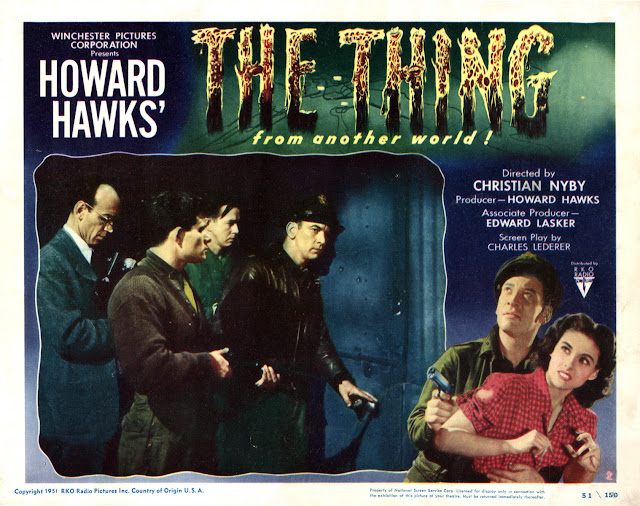 The Thing From Another World (1951) at 4:15 pm Saturday: If you want to cool off on the couch this weekend then fire up the TV for this seminal science fiction film about a giant blood-sucking alien (James Arness) who menaces an Arctic Research Station.

Monster of the Month: The Mummy (Sunday, Oct. 7, prime time)

This October's monster of the month is the Universal horror baddie, The Mummy. TCM is airing three forties Mummy movies on Sunday starting with The Mummy's Hand (1940) at 8 pm in which a group of archaeologists find a very live monster (Tom Tyler) when they open a tomb. Horror icon Lon Chaney, Jr., took over the grave clothes for two sequels: The Mummy's Ghost (1944) at 9:30 pm and The Mummy's Curse (1944) at 10:45 pm.