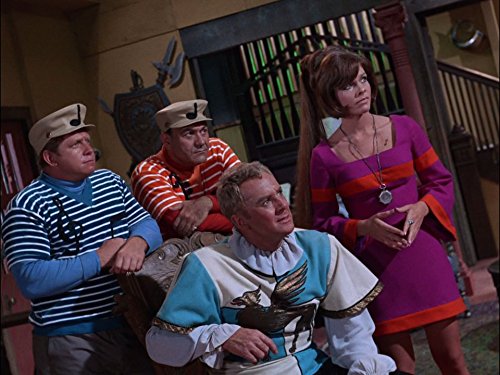 This article is part of The Second Van Johnson Blogathon hosted by Love Letters to Old Hollywood. Also, a gentle warning that there are spoilers ahead for the Batman episodes "The Minstrel's Shakedown" and "A Barbecued Batman?"

Van Johnson was one of several old Hollywood stars who found a lucrative and fun gig playing a "special guest villain" on the sixties TV series Batman. Johnson appeared in two episodes of Season 2 as the lute-playing bad guy, The Minstrel (the screenshot above shows Johnson with Norman Grabowksi, Remo Pisani, and Leslie Perkins).

Johnson's first Batman episode was "The Minstrel's Shakedown." The story begins when the Gotham stock exchange suddenly goes haywire because of an electronic frequency of unknown origin. While investors panic, a mysterious stranger called The Minstrel takes over Gotham's TV signal and announces that everything will return to normal just as soon as Gotham officials starting depositing $1,000 a day in a Swiss bank account.  The Minstrel's message causes Commissioner Gordon (Neil Hamilton) to pick up the red phone and summons Batman (Adam West) and Robin (Burt Ward), who promptly find The Minstrel's secret lair through the use of a drone. 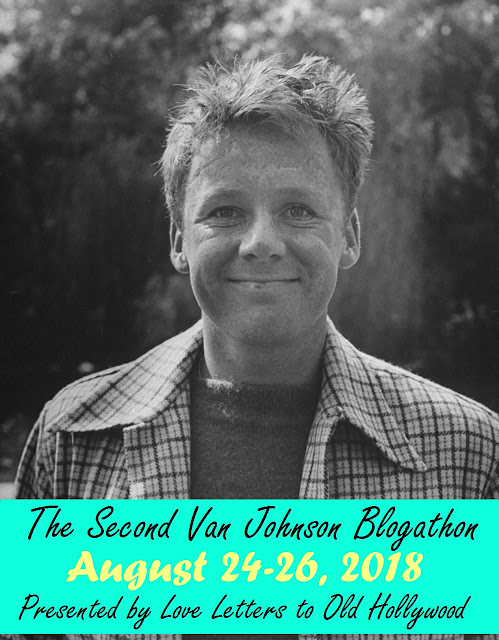 "The Minstrel's Shakedown" ends with The Minstrel roasting the Caped Crusader and Boy Wonder on a large spit. In the first few moments of Johnson's second episode "Barbecued Batman?" the dynamic duo make a daring escape, which causing the scheming bad guy to enact "Plan High C." The Minstrel appears on Gotham TV to announce that he will blow up the stock exchange using sound frequencies (or something like that) unless he gets the cold, hard cash by 6 pm. This new turn of events causes Commissioner Gordon to once again pick up the phone for help from the Bat Cave.

Batman was a popular ABC show that aired two times per week during its second season, which ran in 1966 and 1967. Its brightly colored costumes, groovy music, and memorable catchphrases made the series popular with kids and teens, but the real draw of the show was the colorful villains, who were often portrayed by old Hollywood stars. By the time Johnson appeared as The Minstrel, the series had already featured familiar faces like Cesar Romero (The Joker), Roddy McDowall (The Bookworm), Anne Baxter (Zelda the Great), and George Sanders (Mr. Freeze).

At first, Johnson, who is known to classic movie fans for his roles in musicals and World War II movies, seems like an odd fit for a Medieval-themed bad guy. However, in the 1960s, Johnson was primarily known to TV audiences for playing the title character in the frequently aired holiday special The Pied Piper of Hamelin (read my review here). In this 1957 TV movie, Johnson wears a doublet and hose and speaks in rhyme, which are character traits shared by The Minstrel; in fact, The Minstrel, who never appeared in any Batman comics,* is really just a campier version of the Piper.

Viewed today, Johnson's two episodes are a lot of silly fun. The Minstrel isn't one of the great Batman villains like The Joker or Catwoman, but he's certainly no slouch either, and it's a shame that Johnson didn't make more appearances on the show.

Here's some things to look for when you watch "The Minstrel's Shakedown" and "Barbecued Batman?"

1. Phyllis Diller has a cameo as Gotham's most frustrated cleaning lady (she's totally over superheroes and the mess they leave behind).
2. It's revealed that Bruce Wayne's faithful butler Alfred (Alan Napier) likes to dabble in the stock market. Incidentally, Napier and Johnson both appeared in the fantastic World War II film, Thirty Seconds Over Tokyo (1944).
3. Batman's preferred afternoon snack is a peanut butter and watercress sandwich washed down with milk. Peanut butter and watercress was actually a popular treat in the early 20th century (here's a recipe).
4. In a cheeky James Bond reference, The Minstrel asks that his ill-gotten gains be deposited in account 007 of the Broccoli bank (Albert Broccoli was a producer who brought the suave spy to the screen).
5. Robin's Aunt Harriet (Madge Blake), standing in for all the Johnson-crushing moms in the audience, has a soft spot The Minstrel.
6. Robin yells "Holy hotspot, Batman" about 16 years before the invention of the Internet.

I'll leave you with this video clip from the cliffhanger of "The Minstrel's Shakedown."

.
Footnotes:
*A villain called The Minstrel appeared in forties Doll Man comics, but he does not have the same appearance as Johnson's character.