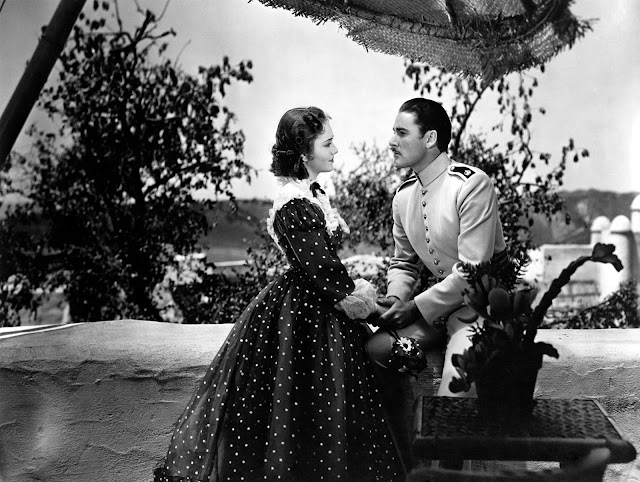 This article is part of The Third Annual Olivia de Havilland Blogathon hosted by In the Good Old Days of Classic Hollywood and Phyllis Loves Classic Movies.

The second movie starring legendary old Hollywood screen team Olivia de Havilland and Errol Flynn was the historical action-adventure saga, The Charge of the Light Brigade (1936), which features one of the most spectacular battle sequences ever put on film.

The Charge of the Light Brigade tells the story of Major Geoffrey Vickers (Flynn), a British cavalry officer stationed in 1850s India with a bright future and a beautiful fiancee named Elsa Campbell (de Havilland). However, things begin to go awry when Elsa falls for Geoffrey's diplomat brother, Perry (Patric Knowles), while he is away on a mission. Even worse,  a fearsome rajah named Surat Khan (C. Henry Gordon), lays siege to the garrison where Geoffrey is stationed and kills most of the inhabitants, including several women and children and Elsa's father (Donald Crisp). Geoffrey and the surviving soldiers vow revenge on Surat Khan; they finally get their chance when Khan joins the Russians during the pivotal siege of Sevastopol* in the Crimean War**. 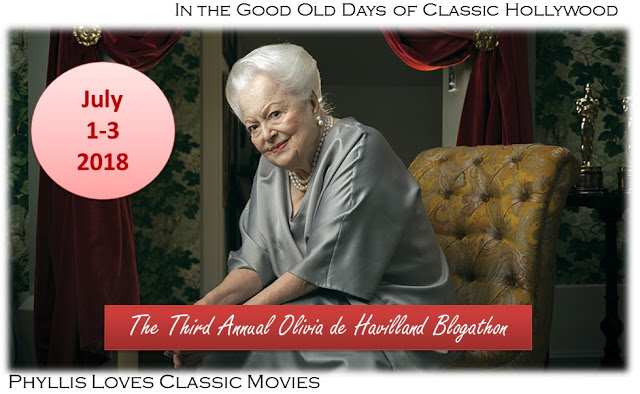 The Charge of the Light Brigade was a military mishap*** that was transformed into a glorious example of British gallantry by poet laureate Alfred, Lord Tennyson. He wrote his poem with the famous opening lines "Half a league, half a league/Half a league onward/ All in the valley of death/Rode the six hundred" in six minutes after reading newspaper accounts about the charge (you can give a listen to the poem here). Tennyson's poem was still widely known in the 1930s when Warner Bros. decided to make a movie based on the famed incident (The Charge of the Light Brigade had already been made into a 1912 short film, and director Tony Richardson would revisit the story in a 1968 British film) .

Studio executives certainly had an eye to the handsome box-office profits raked in by Paramount Pictures Indian adventure The Lives of a Bengal Lancer (1935), but they also thought a historical adventure would be an ideal subject for re-teaming director Michael Curtiz with up-and-coming stars de Havilland and Flynn. The trio had just scored a major success with the swashbuckler Captain Blood (you can read my article from last year's blogathon here) and The Charge of the Light Brigade's emphasis on derring-do and romance was the perfect follow-up for thirties audiences who were looking for escapism and adventure during their weekly trips to the theater.

Warner's spent $1.2 million on The Charge of the Light Brigade, and, as the old saying goes, it's all up there on the screen. De Havilland looks lovely in Milo Anderson's sumptuous gowns and even Nigel Bruce cuts quite a dash in the splendidly ornate uniforms. The sets are also quite eye-popping, especially Surat Khan's palace (complete with the biggest bird cage you've ever seen) and the desert garrison, which is the setting for a great battle sequence.

However, Warner's didn't lavish quite so much money on accommodations for the cast and crew during the long shoot in the remote Alabama Hills of Eastern California and the Sierra Nevada mountains. In his delightful memoir Bring on the Empty Horses, actor David Niven, who plays a heroic member of the Light Brigade, remembered that after the only hotel on location burnt down, the unfortunate crew members were forced to stay in flimsy makeshift tents where they were either choking from the frequent sandstorms or freezing during the long, cold desert nights.

To make matters worse, there was a lot of tension between the quick-tempered Flynn and the no-nonsense Curtiz. The Hungarian director's management style included yelling garbled orders through a megaphone -- Niven got the title for his memoir from Curtiz's mangled way of asking for riderless horses to be brought on the set -- and treating his star players with a distinct lack of deference. This annoyed Flynn who was enjoying the matinee-idol status he earned while filming Captain Blood, and there were frequent on-set shouting matches between the director and actor.

The animal-loving Flynn was also horrified by the rampant abuse of the horses, who were often killed and maimed by the overuse of trip wires during the charge scene. Flynn rightly called the American Society for the Prevention of Cruelty to Animals and campaigned to have the practice stopped (whatever else you can say about Flynn, and there's a lot, I will forever hold him in high regard for his courage in speaking for those who could not speak for themselves).

Ironically, Flynn and de Havilland, who had such palpable chemistry onscreen during Captain Blood, weren't getting along either. Flynn had a crush on his leading lady, but he showed it by playing juvenile pranks like nailing her dressing room door shut and placing whoopee cushions on her chair. The proper de Havilland was horrified by such behavior. She later said in an interview quoted on the TCM database, "[Flynn] disappointed me on more than one level. I had idealistic notions of behavior and his was hardly the heroic manner he offered the world on screen."


In some ways, The Charge of the Light Brigade is the least successful of the Errolivia films. The palpable chemistry they have in Captain Blood, The Adventures of Robin Hood (1938), and They Died With Their Boots On (1941) is largely absent. This is partly due to the fact that de Havilland's character is rather inexplicably in love with another person (Knowles is personable, but he's no matching for the dashing Flynn), but I'm sure Flynn and de Havilland's personal disagreements also had something to do with the limpness of their love scenes.

However, what The Charge of the Light Brigade lacks in romance it makes up for in action. Curtiz had plenty of personal flaws, but his ability to direct an action sequence is second to none. He packs the screen with derring-do from the opening hunting scene to a spectacular desert battle that could have come straight out of an Indiana Jones movie. The final charge  is an unqualified triumph for Curtiz+, who was the most versatile of old Hollywood directors. In this sequence, he works in a style of montage pioneered by Russian director Sergei Eisenstein++ that builds and builds in excitement until the doozy of a final shot that, as so much in Curtiz's body of work, says it all without a single word being uttered.

Happy 102nd birthday to Ms. de Havilland. Here's to many, many more!

The Charge of the Light Brigade is available on DVD and video on demand.

Footnotes  (You don't have to know anything about the real Crimean War or the real charge of the Light Brigade to watch the movie and read this article. These are just simple explanations for those who want to avoid the mind-numbing info dump that is the Wikipedia entries for these events):
*The actual charge of the Light Brigade occurred at the Battle of Balaclava, not Sevastopol.
**The Crimean War was a conflict between Russia and the combined forces of the United Kingdom, France, and the Ottoman Empire that occurred from 1853 to 1856. The reasons for the Crimean War are quite complex, but, if you want to take a deep dive into Tsarist autocracy and British foreign policy in the 1850s, then read The Victorians by A.N. Wilson and The Crimean War by Orlando Figes.
***The charge was the result of unclear orders: The light cavalry were supposed to recapture a small amount of British artillery, but, because of vague orders and the ineptitude and/or insubordination of  a courier, the men charged straight at the main Russian fortifications where they were surrounded on all sides by a barrage of cannon and rifle fire. 661 men participated in the charge; 113 were killed, 134 wounded, and 45 taken prisoner. Also, 362 horses died or went missing. Both the 1912 short film (clip here) and the 1968 film are fairly accurate depictions of the incident.
+Curtiz is most famous for Casablanca (1942), but during his long career, he successfully worked in virtually every old Hollywood genre. Some of his other films include The Sea Wolf (1941), Yankee Doodle Dandy (1942), Mildred Pierce (1945), The Breaking Point (1950),  and Jim Thorpe--All-American (1951).
++I think the Soviet style of montage is quite hard to explain verbally but quite easy to spot visually. Here's a scene from Eisenstein's 1925 film Battleship Potemkin; the similarities to the way Curtiz filmed the final charge are quite easy to spot.