This week on TCM, you can take a trip through the Southern U.S. with films like the Florida-set noir Key Largo (1948) starring Thomas Gomez, Marc Lawrence, and Edward G. Robinson (photo above). There's also a  Wednesday night of films from classic comedy teams and an iconic World War II adventure featuring star-of-the-month Steve McQueen on Thursday. Note: All times are ET and the highlighted text has links to full-length articles.

Here's a link to the complete schedule from July 9-July 15.

Each Monday and Tuesday in July, TCM is taking a classic-movie tour of the U.S. with a lineup of films representing each one of the 50 states and the District of Columbia. This week's movies are set in the Southern U.S.

Shenandoah (1965) at 8 pm Monday: James Stewart plays the patriarch of a Virginia family who becomes involved in the Civil War when his beloved youngest son (Phillip Alford) is taken prisoner by the Union Army.

The Night of the Hunter (1955) at 10 pm: Director Charles Laughton's dreamlike tale of two orphaned children (Billy Chapin and Sally Jane Bruce) who are pursued by a ruthless criminal/preacher (Robert Mitchum) takes place along the West Virginia side of the Ohio River. The film does have establishing shots that were filmed in and around Moundsville, W.Va.
Bright Leaf (1950) at midnight: This soaper about the North Carolina tobacco industry stars Gary Cooper, Patricia Neal, and Lauren Bacall.
Conrack (1974) at 2 am: A fascinating film about an idealistic young man (Jon Voight) who becomes a teacher to the Gullah people who live on the sea islands off the South Carolina coast. Filmed in Brunswick and St. Simons Island, Ga.
Mr. Smith Goes to Washington (1939) at 4 am: Director Frank Capra's classic tale of political greed and corruption represents the District of Columbia. 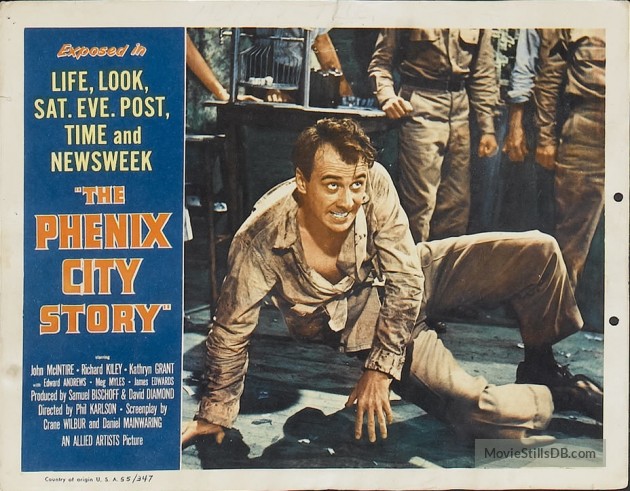 Key Largo at 8 pm Tuesday: Director John Huston's crackling noir is about a group of hotel guests who must sit out a terrifying hurricane in the Florida Keys.
Wise Blood (1979) at 10 pm: Another film directed by Huston, this unusual movie is based on a Flannery O'Connor novel about a bizarre preacher (Brad Dourif) who runs into trouble in a Georgia town. Filmed in and around Macon.
The Phenix City Story (1955) at 12:30 am: This fascinating true crime noir is about a principled lawyer (John McIntire) who tries to clean up an Alabama town known as "Sin City, USA." Filmed on location in Phenix City.
A Walk in the Spring Rain (1970) at 2:30 am: A romance about a lonely professor's wife (Ingrid Bergman) and a Tennessee man (Anthony Quinn) that was partially filmed in the Great Smoky Mountains National Park.
The Story of Seabiscuit (1949) at 4:45 am: This heavily fictionalized biopic of the great racehorse has Kentucky-by-way-of-Ireland trainer Barry Fitzgerald coaching the promising colt to victory. Includes footage of the real Seabiscuit's races.

TCM's Wednesday lineup of films featuring leading man Sterling Hayden include two great noirs. Hayden plays a small-town sheriff who tries to stop Frank Sinatra and his gang from assassinating the President in Suddenly (1954) at 4:15 pm. In director John Huston's great heist film (BTW, this is a good week for Huston fans) The Asphalt Jungle (1950) at 5:45 pm Hayden gives a great performance as a Kentucky farm boy turned jewel thief.

Sons of the Desert (1933) at 9:30 pm Wednesday: It's hot out there (at least in the Midwest) so why not turn up the air conditioner, grab a cool glass of your favorite beverage, and watch this Laurel and Hardy laugh riot about two henpecked husbands who sneak off to their club's annual convention. The boys are hilarious on their own, but there's also a great cameo from comedian Charley Chase. Part of a night of movies featuring comedy teams.
More comedy teams: There's also an exceptionally funny Abbott and Costello movie The Time of Their Lives (1946) at 8 pm (Bud takes over a country estate that is haunted by Revolutionary War ghost Lou) and the four Marx Brothers stow away on a cruise ship in Monkey Business (1931) at 10:45 pm.

Set Your DVR for the French Revolution (Thursday, July 12 daytime)

There's a great Thursday lineup of films about the French Revolution starting with Norma Shearer as the doomed queen in Marie Antoinette (1938) at 6 am. Director Anthony Mann and cinematographer John Alton bring a noir vibe to historical thriller The Black Book (1949) at 8:45 am (this movie is better known as Reign of Terror) while the excellent 1935 adaptation of A Tale of Two Cities is on at 10:30 am. If you caught TCM's June tribute to Leslie Howard you know how great The Scarlet Pimpernel (1934) at 12:45 pm is, but Stewart Granger also buckles a fine swash in Scaramouche (1952) at 2:45 pm. Finally, George Arliss plays yet another historical character in the biopic of philosopher Voltaire (1933) at 4:45 pm and Louis Jourdan and Belinda Lee try to save a young prince (Richard O'Sullivan) in Dangerous Exile (1958) at 6:15 pm

TCM is showing films starring the King of Cool every Thursday in July. Here's this week's lineup:
The Great Escape (1963) at 8 pm: McQueen shot to super-stardom thanks to his iconic motorcycle ride in this World War II action adventure.
Soldier in the Rain (1963) at 11 pm: This quirky comedy-drama stars Jackie Gleason as a cynical master sergeant who strikes up a friendship with a naive fellow soldier (McQueen). The material isn't a natural fit for either man -- Gleason just isn't plausible as a member of the military and country bumpkin really isn't in McQueen's wheelhouse -- but the movie managed to suck me in anyway.
Baby, the Rain Must Fall (1965) at 12:45 am: McQueen gives an excellent performance as a troubled Texas honky tonk singer who can't commit to his wife (Lee Remick) and daughter (Kimberly Block), although the obvious dubbing of his vocals (by Billy Strange) detracts from the movie.
The Honeymoon Machine (1961) at 2:45 am: A typical sixties comedy that has buddies McQueen and Jim Hutton trying to beat the roulette table at a Venice casino.

Pick from Around the Blogosphere (Friday, July 13 prime time)

My fellow classic movie bloggers Paddy at Caftan Woman (review here) and Laura at Laura's Miscellaneous Musings (review here) highly recommend The Girl in White (1952) at 8 pm Friday, a biopic about a pioneering female doctor played by June Allyson. Part of a night of films about women in medicine.
More women in medicine: There's also doctor Barbara Stanwyck sparring with jealous husband Henry Fonda in the comedy You Belong to Me (1941) at 9:45 pm, Greer Garson as a Western doctor in Strange Lady in Town (1955) at 11:30 pm and pre-code favorite Kay Francis as Doctor Monica (1934) at 1:30 am. 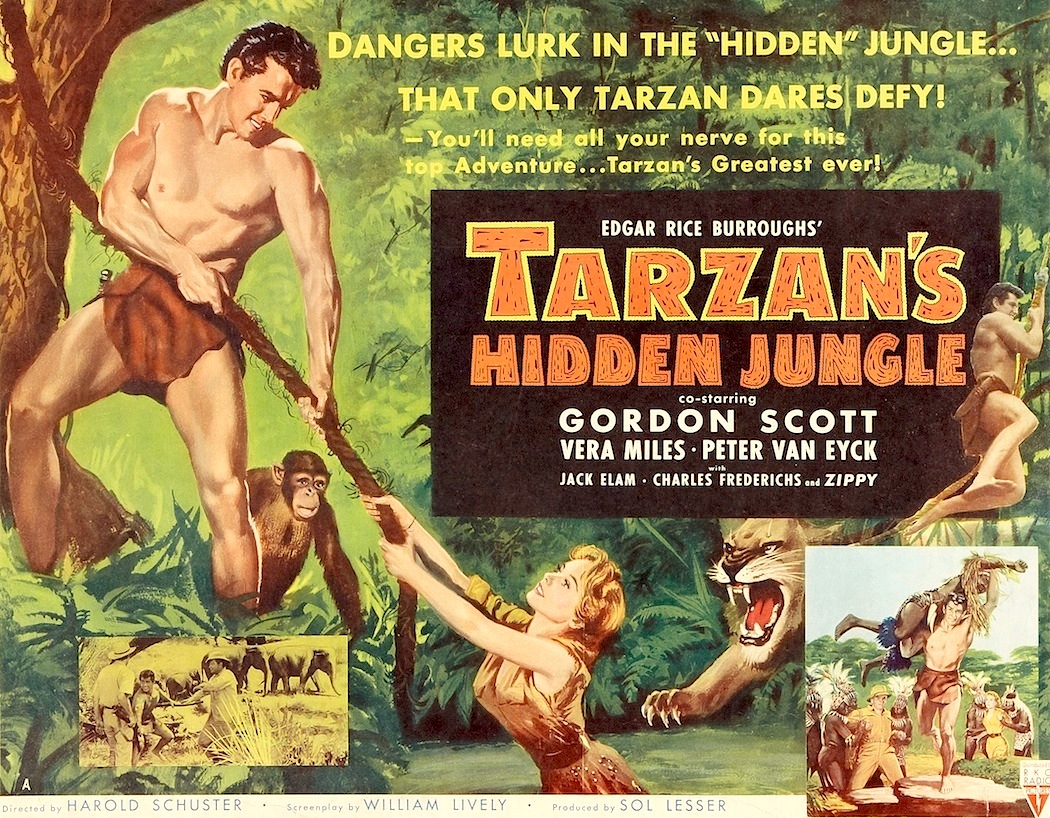 Highlights from this week's Saturday morning of family programming include Song of Revolt (1937) a short film about the writing of the French national anthem, La Marseillaise, and Lord of the Jungle Gordon Scott battling big-game hunter Jack Elam in Tarzan's Hidden Jungle (1955) at 10 am. The matinee airs from 8 am to noon. 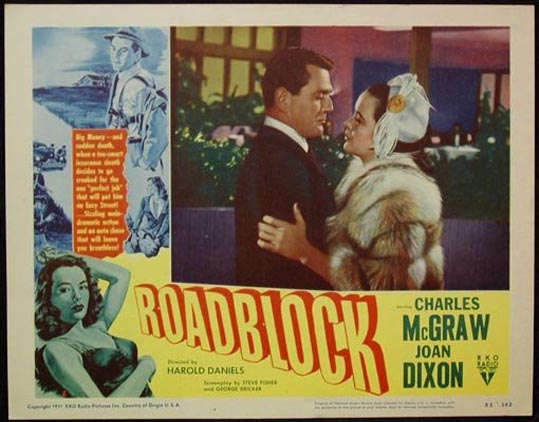 Roadblock (1953) at 12:15 am Saturday night/Sunday morning and 10 am Sunday: Straight arrow insurance investigator Charles McGraw turns to a life of crime to get enough cash to impress sultry dame Joan Dixon. An RKO Pictures noir with cinematography by Nicholas Musuraca.

Meet John Doe (1941) at 7:45 am Sunday: The holidays are about six months away, but you can indulge in a little Christmas cheer with director Frank Capra's classic about a hobo turned media personality (Gary Cooper) who threatens to jump off city hall on Christmas Eve to protest the poor treatment of everyday Americans.

One of the great screwball comedies is The More the Merrier (1943) airing at 8 pm Sunday. It's about a Washington D.C. singleton (Jean Arthur) who must share her small apartment with bureaucrat Charles Coburn and military officer Joel McCrea during the World War II housing shortage. Ironcially, screwball legend Cary Grant took over Coburn's role for the in the 1966 remake, Walk, Don't Run at 10 pm, which takes place during the 1964 Tokyo Olympics. This was Grant's final film role. 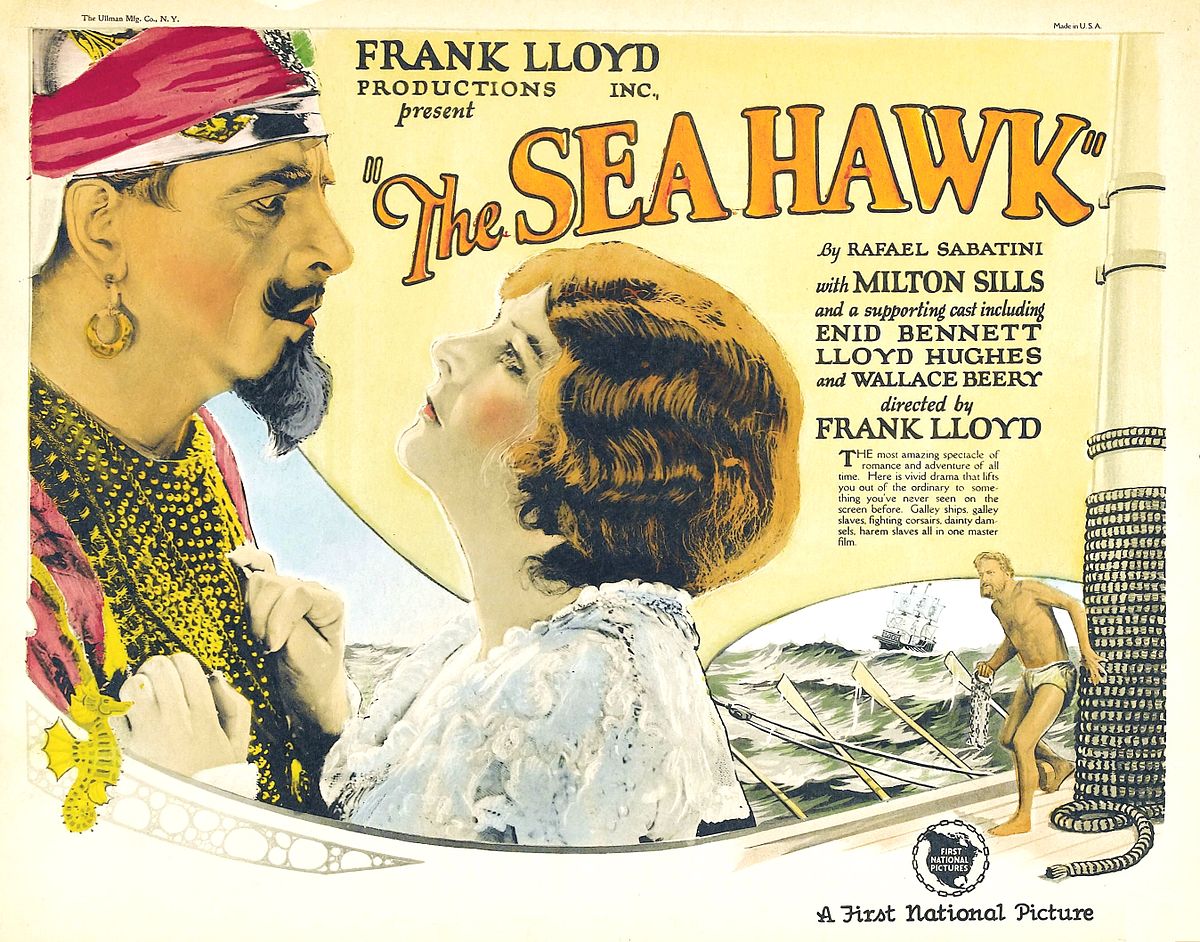 The Sea Hawk (1924) at 12:15 am Sunday night/Monday morning: The first film adaptation of author Rafael Sabatini's swashbuckler is an eye-popping screen spectacular that features several full-size ships that were built specifically for the film. Warner Bros. continued to use footage from this movie throughout the years, including in the 1940 remake starring Errol Flynn.