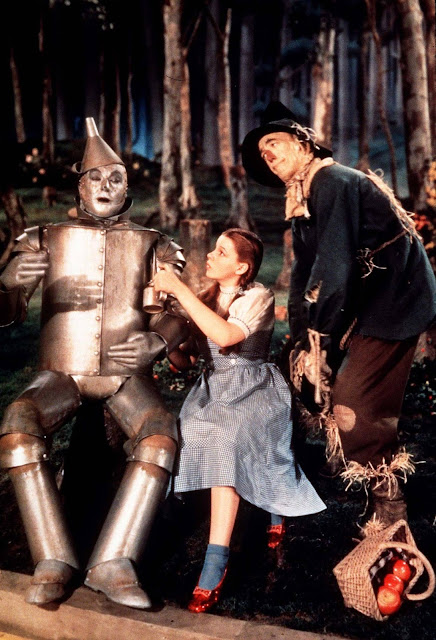 This week's TCM lineup is bringing viewers all-time classics Gone With the Wind (1939) and The Wizard of Oz (1939), plus a tuneful lineup of musicals from Busby Berkeley, Fred Astaire and Ginger Rogers and more. Note: All times are ET and the highlighted text has links to full-length articles.

Here's a link to the complete schedule for June 4-June 10. 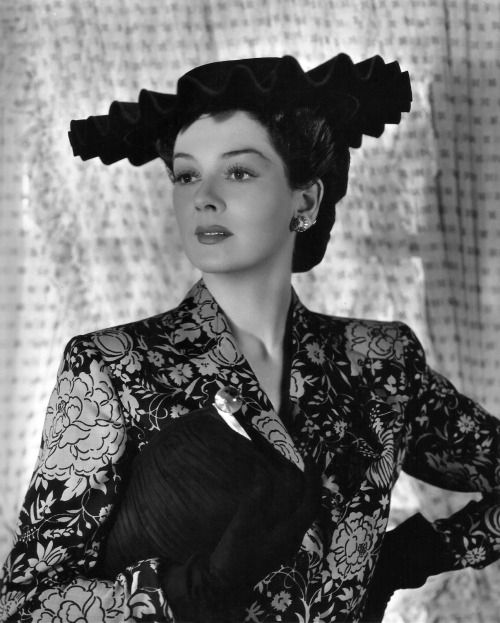 The versatile actor was born Catherine Rosalind Russell on June 4, 1907, in Waterbury, Conn. The best bets are Russell's iconic performance as Auntie Mame (1958) at 11 am, the mystery Fast and Loose (1939) at 1:30 pm opposite frequent costar Robert Montgomery (they play married detectives a la Nick and Nora Charles), and the classic screwball comedy His Girl Friday (1940) at 4:30 pm.

TCM is kicking off its month-long tribute to this English actor on Monday with a documentary and two of his best-remembered roles. Here's the lineup:
Leslie Howard: The Man Who Gave a Damn (2016) at 8 pm and 1:45 am: This documentary about Howard's life, career, and military service includes never-before-seen home movies.
Gone With the Wind (1939) at 9:45 pm: Howard did not want to play the role of  Southern aristocrat Ashley Wilkes in this Civil War epic, but, for better or worse, this is the movie he will always be remembered for.
The Petrified Forest (1936) at 3:30 am: Howard repeated his stage success in this gangster movie about an escaped convict (Humphrey Bogart) who takes an idealistic writer (Howard) hostage at a remote diner. Howard insisted that Bogart, who costarred with him on Broadway, come to Hollywood to make the big screen version. Bogie was always grateful for Howard's support; he named his daughter Leslie in his honor.

TCM is going Mad About Musicals throughout June. The network is offering a free course from Canvas Network (sign up here) and TCM is airing musicals all-day each Tuesday and Thursday. Tuesday's daytime lineup has musicals from choreographer Busby Berkeley and stars like Bing Crosby, Ethel Merman, and Eleanor Powell. Here's the lineup:
Going Hollywood (1933) at 6 am: Before he became a mega-star in the 1940s, Bing Crosby was a radio personality and star of pre-code musicals like this backstager co-starring Marion Davies.
Footlight Parade (1933) at 7:30 am: This Busby Berkeley-choreographed spectacular stars James Cagney as a hard-charging producer, Joan Blondell as the wise-cracking secretary who loves him and Ruby Keeler and Dick Powell as the bright young things who are waiting for their big break. The human waterfall is an eye-popping spectacle, but Keeler dressed in a cat costume is still probably the film's most memorable moment.
Dames (1934) at 9:30 am: Another Blondell-Keeler-Powell backstager from the mind of Berkeley. This one features the standard, "I Only Have Eyes for You."
The Great Ziegfeld (1936) at 11:30 am: This Academy Award-winning MGM biopic about Broadway showman Florenz Ziegfeld (William Powell) out-Berkeley's Busby with the "A Pretty Girl Is Like a Melody" production number.
Strike Me Pink (1936) at 2:30 pm: Eddie Cantor isn't a name you here much about these days, but he was a Broadway superstar in the 1920s and 1930s. He made six films for independent producer Samuel Goldwyn, including this musical comedy (Cantor is a meek amusement park employee who gets involved with the mob) costarring the legendary Ethel Merman.
Broadway Melody of 1936 at 4:15 pm: This all-star MGM backstager made tap-dancer Eleanor Powell a major star.
Born to Dance (1936) at 6 pm: Powell costars with James Stewart in this delightful film, which features the dancer's unforgettable salute to the Navy.

Tonight's lineup has some of the best pre-code musicals:
The Broadway Melody (1929) at 8 pm: This backstager starring Charles, King, Bessie Love, and Anita Page was the first sound film and the first musical to win an Oscar for best picture. A little creaky now but impressive in its day.
42nd Street (1933) at 10 pm: This naughty, bawdy, gaudy film from the mind of Busby Berkeley revolutionized the movie musical. Still the best backstager ever made, this is the film where Warner Baxter tells Ruby Keeler, "you're going out there a youngster, but you've got to come back a star."
Gold Diggers of 1933 at 11:45 pm: Berkeley's masterpiece, this film about four showgirls (Keeler with Joan Blondell, Aline MacMahon, and Ginger Rogers) features odes to the Great Depression, "We're in the Money" and "Remember My Forgotten Man."
The Love Parade (1929) at 1:45 am: Before Nelson Eddy, Jeanette MacDonald was frequently partnered with Gallic star Maurice Chevalier in films like this saucy Ernst Lubitsch-directed musical about a womanizing count (Chevalier) who romances a strong-minded queen (MacDonald).
Hallelujah (1929) at 3:45 am: Director King Vidor's musical about African-American life in the sharecropper South is somewhat dated, but it is a compelling movie nonetheless that was partially filmed in and around Memphis, Tenn. Don't miss Nina Mae McKinney performing the "Swanee Shuffle." 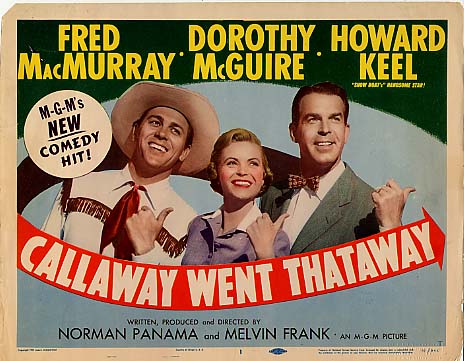 Naughty Marietta (1935) at 8 am: The first teaming of MacDonald with baritone Nelson Eddy was in the screen adaptation of the Victor Herbert operetta. This is the movie in which MacEddy warble "Ah, Sweet Mystery of Life." Click here for my top five Eddy-MacDonald musical numbers.
Rose Marie (1936) at 10 am: Another Eddy-MacDonald vehicle, this operetta features the famed (and much parodied) "Indian Love Call."
Follow the Fleet (1936) at noon: This fun movie about sailors (Fred Astaire and Randolph Scott) on the lookout for female companionship starts off an afternoon of Astaire-Ginger Rogers musicals. The duo slay in the "Let's Face the Music and Dance" number. Click here for my top five Astaire-Rogers dances.
The Gay Divorcee (1934) at 2 pm: This pre-code romp has two moments of Fred-and-Ginger perfection: The Continental dance and "Night and Day." This one is a ton of fun with even Edward Everett Horton getting his own production number ("Let's K-nock K-nees").
Shall We Dance (1937) at 4 pm: "They Can't Take That Away from Me" is the highlight of this musical comedy about a ballet dancer (Astaire) and showgirl (Rogers) who enter into a sham marriage.
Swing Time (1936) at 6 pm: Perhaps the best Astaire-Rogers vehicle, this movie is filled with classics, including the Oscar-winning, "The Way You Look Tonight."

The musicals continue with three of the best old Hollywood films ever made plus musicals from Deanna Durbin and Shirley Temple.
The Wizard of Oz (1939) at 8 pm: Simply, the most-beloved old Hollywood film, I can't think of a man, woman, or child who hasn't fallen under the spell of this fantasy musical based on L. Frank Baum's children's novel.
Top Hat (1935) at 10 pm: This mistaken-identity musical comedy also has a claim on being the best Astaire-Rogers movie. Filled with wall-to-wall classics like "Cheek to Cheek," "White Tie, Top Hat, and Tails," and "Piccolino."
Three Smart Girls (1937) at midnight: Teenage soprano Deanna Durbin was a huge musical star in the late 1930s and early 1940s. Most critics regard this musical comedy about three sisters (Durbin, Nan Grey, Barbara Read) who try to get their parents (Charles Winninger and Nella Clark) back together as her best picture.
Stowaway (1936) at 1:45 am: Child star Shirley Temple was one of the great musical stars of the 1930s. This shipboard romance finds Shirley as a stowaway orphan who melts the hearts of passengers Robert Young and Alice Faye. Shirley performs "You've  Got to S-M-I-L-E to Be H-A Double P-Y" with aplomb.
Maytime (1937) at 3:30 am: MacEddy's masterpiece is this musical drama about an opera singer (MacDonald) who is controlled by her manager/husband (John Barrymore) despite her love for a poor baritone (Eddy). The most-loved song from Maytime is "Will You Remember?" but the short opera "Tsaritsa" is the most vocally and visually impressive moment in the MacEddy canon.

TCM is airing three films from director Edward Dmytryk on Friday night. Dmytryk was a popular director of films noir and war movies until he has blacklisted by the House Un-American Activities Committee in 1947. Dmytryk eventually made a Hollywood comeback in the 1950s where he made the Henry Fonda Western Warlock (1959) at 8 pm (it's like a more bizarre version of My Darling Clementine) and the drama The Left Hand of God (1955) at 10:15 pm, which stars Humphrey Bogart as a downed US pilot who masquerades as a Catholic priest in Communist China. Dmytryk worked in England for a time during his blacklisting where he made the British noir Obsession (1949) at midnight about a man (Robert Newton) who plans revenge on his wife (Sally Gray) and her lover (Phil Brown). 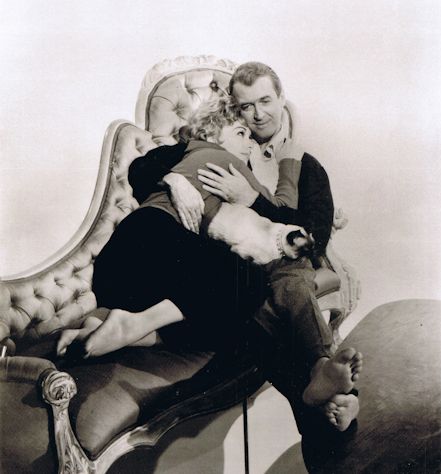 Bell Book and Candle (1958) at 8 pm Saturday: Kim Novak and James Stewart are most associated with their intense roles in director Alfred Hitchcock's Vertigo (1958), but they also made this charming supernatural comedy about a witch who falls for her next-door neighbor.

Conflict (1945) at midnight Saturday night/Sunday morning and 10 am Sunday: Humphrey Bogart plays a man who plans to murder his wife (Rose Hobart) so he can get hot and heavy with her younger sister (Alexis Smith). Sydney Greenstreet plays the family friend who suspects Bogart's guilty secret.


All That Heaven Allows (1955) at 10 pm: The fifties melodramas of director Douglas Sirk have had a resurgence among cinephiles in recent years. One of the best of these movies is All That Heaven Allows, which is about a small town's disapproval of the romance between a widow (Jane Wyman) and her gardener (Rock Hudson). There's lots of good stuff here, but the gorgeous Technicolor cinematography is a standout. 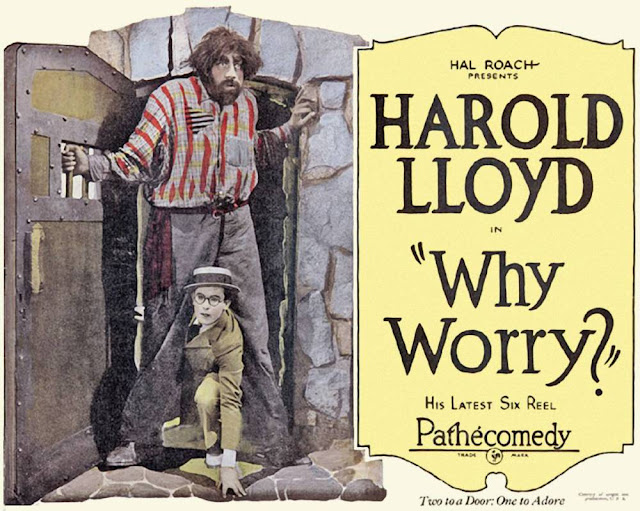 Sunday's lineup features two comedies from Harold Lloyd. Why Worry? (1923) at midnight Sunday night/Monday morning finds our hero stumbling into a political revolution. In Among Those Present (1921) at 1:15 am Lloyd plays a young man who tries to pass himself off as an English aristocrat with hilarious results.