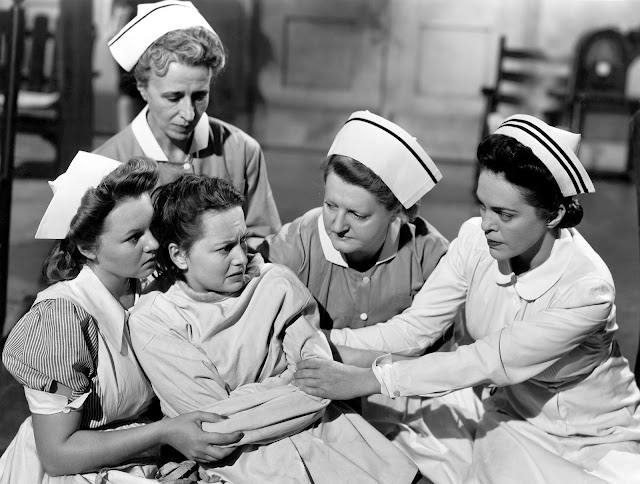 TCM is celebrating Olivia de Havilland's 102nd birthday on Sunday with a lineup of her films that includes her Academy Award-nominated performance in The Snake Pit (photo above). There's also musicals from the 1960s and 1970s on Tuesday and Thursday and a great lineup of Peter Lorre films on Friday.

Here's a link to the complete lineup for June 25-July 1. 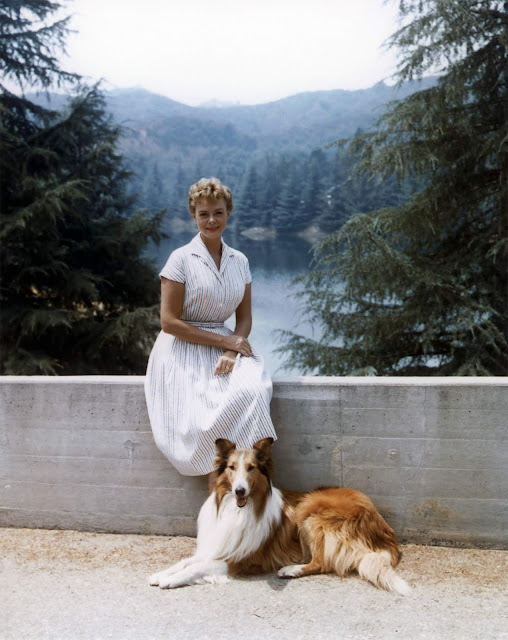 The beloved star of films and TV was born June 25, 1925, in New York City. She is perhaps best-known today for her many appearances with America's favorite collie, Lassie, which began in Son of Lassie (1945) at 6 am Monday. During her teens she also appeared in many prestigious old Hollywood films such as playing Charles Boyer and Barbara O'Neil's daughter in All This, and Heaven Too (1940) at 9:30 am and Gary Cooper's sister in Sergeant York (1941) at noon.

TCM is wrapping up its month-long tribute with a great lineup of films on Monday night:
Outward Bound (1930) at 6:30 pm: A fascinating fantasy film about a disparate group of passengers who are on a ghostly ship between Heaven and hell. Douglas Fairbanks, Jr., and Helen Chandler as young lovers are the standouts here, but Howard gives a fine performance as a ne'er do well who confronts his past. FYI: Fairbanks later claimed he could never watch this film because it was too creepy.
49th Parallel (1941) at 8 pm: A crackling World War II drama about a Nazi U-boat crew who land in Canada. The all-star cast includes Raymond Massey, Laurence Olivier, Anton Walbrook, and Howard as a hapless writer who runs into the Germans on a camping trip.
Spitfire (1942) at 10:15 pm: Howard's final film is this patriotic biopic about the designer of the Spitfire airplane, R.J. Mitchell.
Captured! (1933) at 12:30 am: An exciting film about an escape from a World War I prisoner-of-war camp that is somewhat tarnished by a ridiculous love triangle between Howard, Fairbanks, and Margaret Lindsay.
British Agent (1934) at 2 am: English spy Howard and Bolshevik Kay Francis (?) find love during the Russian Revolution.
Five and Ten (1931) at 3:30 am: Marion Davies plays a gauche heiress who falls for society type Howard despite his engagement to another woman (Mary Duncan). Both leads are good here, but Douglass Montgomery (billed as Kent Douglass) gives the performance of his career as Davies' alcoholic brother.

Don't Knock the Twist (1960) at 6 am: Old Hollywood studios capitalized on the rock 'n' roll craze by making thinly plotted concert movies like this one that features Chubby Checker and Gene Chandler.
Beach Party (1963) at 7:30 am: This is the first of seven popular "beach party" musicals that starred teen sensations Frankie Avalon and Annette Funicello.
Viva Las Vegas (1964) at 9:15 am: While a younger generation of rockers conquered on the silver screen, Elvis Presley continued making musicals of varying quality during the 1960s. The best of these films by far is Viva Las Vegas in which Elvis and costar Ann Margret practically burn down Sin City with their combustible chemistry.
A Funny Thing Happened on the Way to the Forum (1966) at 11 am: Zero Mostel recreated his Broadway triumph in this bawdy, ancient Rome-set musical from Stephen Sondheim. Be on the lookout for Buster Keaton in his final performance and Doctor Who star Jon Pertwee.
Bells Are Ringing (1960) at 1 pm: Judy Holliday is magnificent in her final screen performance as a lonelyhearts telephone operator who falls in love with the voice on the other line (a wonderful Dean Martin). Get your hankies out for "The Party's Over."
The Unsinkable Molly Brown (1964) at 3:15 pm: Debbie Reynolds gives a career-defining performance as the spunky survivor of the Titanic.
Gypsy (1962) at 5:30 pm: Rosalind Russell is iconic as Mama Rose, but Natalie Wood is even more impressive in a performance of great emotional range as the famous burlesque artist Gypsy Rose Lee. Unlike in West Side Story (1961), Wood does her own singing.

My Fair Lady (1964) at 8 pm Tuesday: Perhaps the last great musical made in the old Hollywood studio system, this Warner Bros. triumph beautifully recreates Lerner and Loewe's glorious score. Highlights are "Wouldn't It Be Loverly," "With a Little Bit of Luck," "I Could Have Danced All Night," and "On the Street Where You Live."
The Music Man (1962) at 11 pm: Con man Robert Preston teaches the good folks of River City, Iowa, about the moral uplift of a marching band in this charming adaptation of Meredith Wilson's Broadway smash.
A Hard Day's Night (1964) at 1:45 am: This day-in-the-life film starring The Beatles expanded the horizons of the rock 'n' roll musical and proved that the Fab Four (especially Ringo Starr) were movie-star material.
Bye Bye Birdie (1963) at 3:30 am: This Broadway hit starring national treasure Dick Van Dyke satirizes the popularity rock 'n' roll and TV in American life.
Camelot (1967) at 5:30 am: This Lerner and Loewe musical became a pop-culture staple after First Lady Jacqueline Kennedy mentioned her husband's fondness for it after his assassination. It received a lavish screen adaptation starring Richard Harris, Vanessa Redgrave, and Franco Nero. 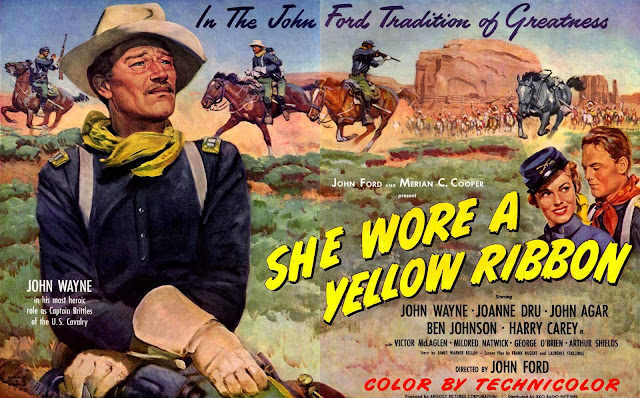 She Wore a Yellow Ribbon (1949) at 8:45 am Wednesday: This second film in director John Ford's cavalry trilogy stars a never-better John Wayne as a retiring officer who must go on one last mission. The Monument Valley vistas are simply stunning in glorious Technicolor. Part of a daytime lineup of movies about colors.


"Well, Did You Evah?" in High Society (1956) at 10 pm Wednesday: Bing Crosby and Frank Sinatra's scintillating duet to composer Cole Porter's witty nonsense song is the best moment by far in this musical remake of The Philadelphia Story (1940). As one YouTube commenter put it, "this is the coolest thing in the history of ever." Part of a night of films about June brides.
More brides: Other great films in Wednesday's lineup are the domestic comedy Father of the Bride (1950) at 8 pm and the James Cagney-Bette Davis screwball The Bride Came C.O.D. (1941) at midnight.

Thursday's lineup includes musicals from the late 1960s and 1970s:
Finian's Rainbow (1968) at 5:30 am: This fantasy about an Irishman (a miscast Fred Astaire) who steals a pot of gold from a leprechaun (Tommy Steele) doesn't work on all levels, but it is an undoubted showcase for the talents of Petula Clark.
The Boy Friend (1971) at 8 am: An interesting homage to pre-code musicals like 42nd Street (1932), this film has a delightful lead performance from sixties sensation Twiggy.
Mame (1974) at 10:30 am: This musical version of Auntie Mame (1958) isn't as bad as some make out, but it would have greatly benefited everyone if Angela Lansbury, who played the role onstage, was cast instead of Lucille Ball.
Man of La Mancha (1972) at 12:45 pm: This musical adaptation of Don Quixote is another mixed bag with the highlights being Sophia Loren as Dulcinea and the iconic "The Impossible Dream" number.
Godspell (1973) at 3 pm: The hippie musical, such as this retelling of the life of Christ (Victor Garber), was a popular subgenre in the 1970s.
1776 (1972) at 5 pm: A surprisingly accurate musical about the signing of the Declaration of Independence even though the founding fathers weren't known to belt out show tunes. Noir staple Howard Da Silva is brilliant as Benjamin Franklin.

Funny Girl (1968) at 8 pm Thursday: This biopic of Broadway legend Fanny Brice won Barbra Streisand a much-deserved Oscar for a tour-de-force performance that includes iconic numbers "People," "Don't Rain on My Parade," and "My Man."
Fiddler on the Roof (1971) at 10:45 pm: Perhaps the best musical of the 1970s, this film is both a universal story about family and change, and a glimpse into the now-vanished world of the Jewish shtetl.
Cabaret (1972) at 2 am: Certainly the most successful musical since Funny Girl, Bob Fosse's film about life in Berlin during the days before World War II won eight Oscars including best director, best actress for Liza Minnelli, and a richly deserved best supporting actor for Joel Grey.
Tommy (1975) at 4:15 am: The rock opera came of age with this film about a pinball wizard (The Who's Roger Daltrey).
Oliver! (1968) at 6:15 am Monday morning: This musical version of Charles Dickens' novel Oliver Twist was the unexpected best picture winner of 1968. Still a delightful family treat, Shani Wallis brings down the house with "As Long as He Needs Me." 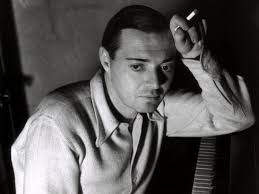 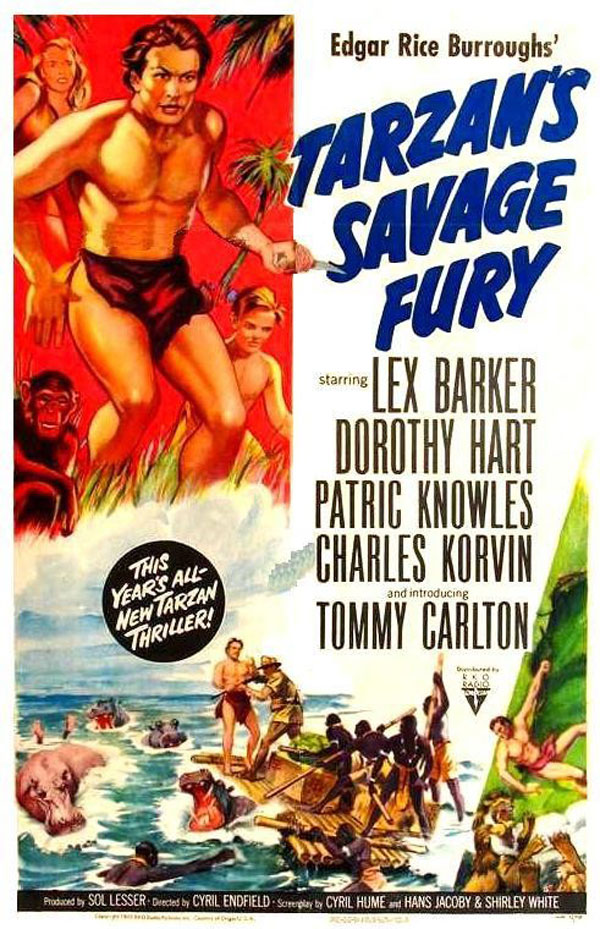 Highlights from this week Saturday morning lineup of family films include a 1939 Technicolor short about composer Felix Mendelssohn's famed The Wedding March (people don't seem to use this anymore at weddings, so here's a clip if you want to know what it sounds like), Lex Barker as the Lord of the Jungle in the 1952 film Tarzan's Savage Fury (just FYI, Cheeta gets pretty wound up, too), Popeye and Bluto attempting to save Olive Oyl from a blaze in The Two-Alarm Fire (1934) cartoon and the Vitaphone short The Old Grey Mayor (1935) starring a young Bob Hope. The lineup airs from 8 am to noon. 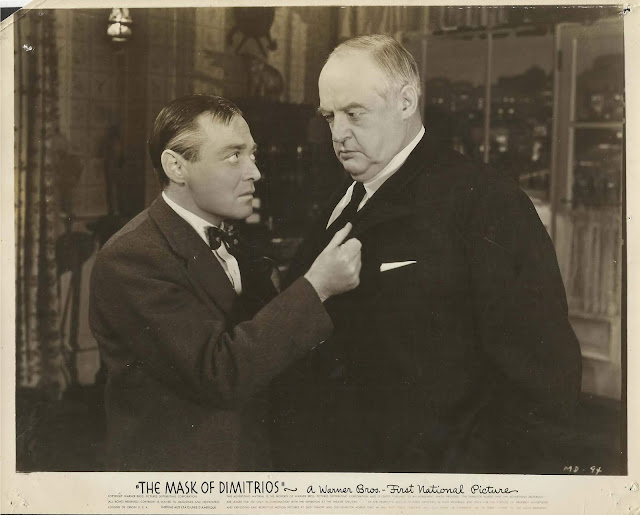 The Mask of Dimitrios (1944) at 8 pm Saturday: Character actors Sydney Greenstreet and Peter Lorre appeared in nine films together including this underrated noir about a meek writer (Lorre) and a smuggler (Greenstreet) who are on the trail of a criminal mastermind (Zachary Scott).


Armored Car Robbery (1950) at midnight Saturday night/Sunday morning and 10 am Sunday: Everyone talks about The Asphalt Jungle, but this B movie from director Richard Fleischer is the other great heist film of 1950. William Talman stars as the criminal mastermind, and Charles McGraw is the cop who is on his trail. 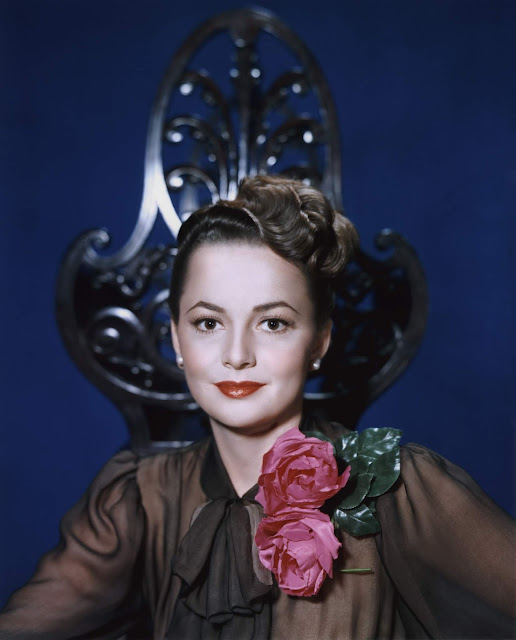 TCM is celebrating the 102nd birthday of this old Hollywood icon born July 1, 1916, in Tokyo, with a daytime lineup of her films. Highlights include two with screen partner Errol Flynn (They Died with Their Boots On (1941) at 7:30 am and The Private Lives of Elizabeth and Essex (1939) at 4 pm) and her Oscar nominated-performance in The Snake Pit (1948) at 6 pm. 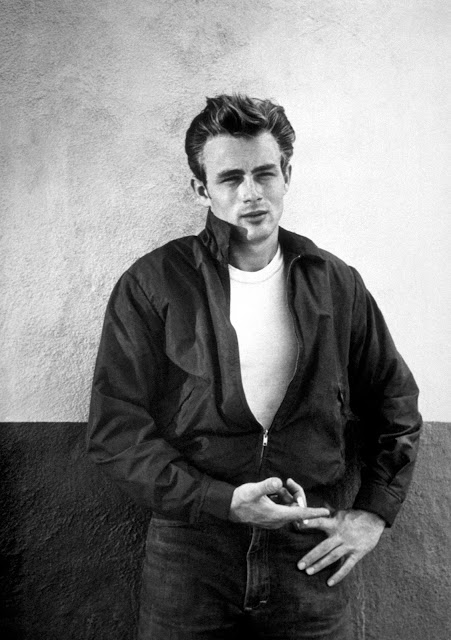 James Dean in Rebel Without a Cause (1955) at 8 pm Sunday: The acting prowess of James Dean has been slightly inflated since his untimely death, but that doesn't mean he wasn't a supremely talented artist. His intuitive, emotionally vulnerable performance as mixed-up teenager Jim Stark in director Nicholas Ray's drama still packs a wallop, especially in the movie's tragic final moments. 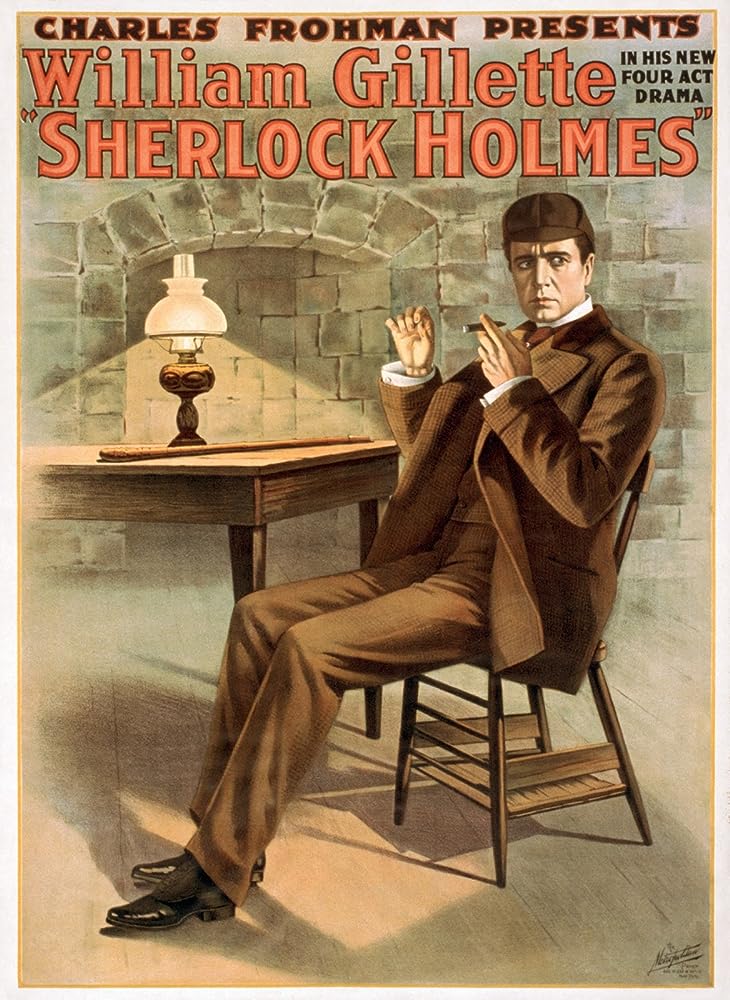 Sherlock Holmes (1916) at 12:15 am Sunday night/Monday morning: William Gillette recreates his famed stage performance as the world's first consulting detective. This film was thought lost until 2014 when a print showed up in France.