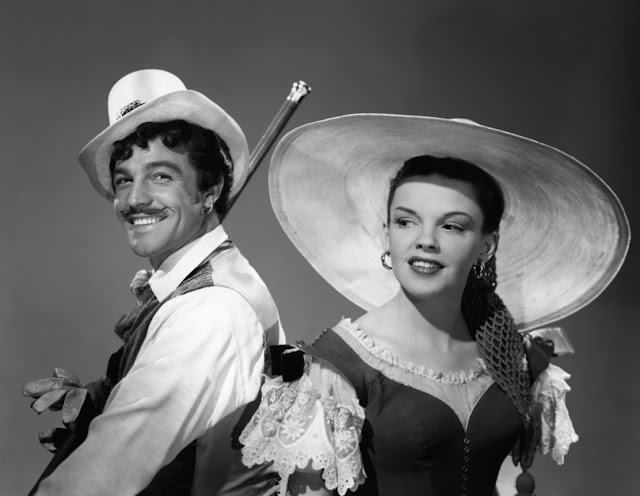 This article is part of  The Second Annual Judy Garland Blogathon presented by In the Good Old Days of Classic Hollywood.

Judy Garland's 1948 musical The Pirate (1948)  is a bit of a mixed bag. This film about a naive Caribbean girl (Garland) who believes she has uncovered the identity of a legendary pirate is both too arty and too much of a spoof for its own good, but the movie does feature one song from composer Cole Porter that later influenced the careers of both Garland and costar Gene Kelly.

The Pirate tells the story of Manuela, a naive young woman who lives in a small Caribbean village named Calvados. Manuela's strong-willed aunt (Gladys Cooper) has arranged for her niece to marry the much-older mayor of Calvados (Walter Slezak), but, when Manuela travels to a port town to buy her trousseau, she becomes enthralled by a magnetic circus performer named Serafin (Gene Kelly) who she believes is really a legendary pirate. Serafin is equally enchanted by Manuela, and when he and his circus troupe follow her to Calvados (they arrive on her wedding day), chaos ensues. 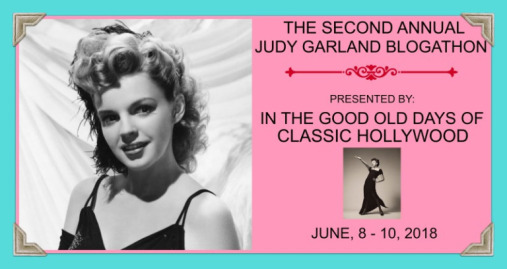 The Pirate is based on a 1942 non-musical play that was a hit on Broadway for stage legends Alfred Lunt and Lynn Fontanne. MGM executives had originally planned to turn the play into a romantic comedy, but producer Arthur Freed, director Vincente Minnelli, who was married to Garland at the time, and Kelly convinced the top brass to turn the film into a musical for Garland and to hire the prolific Porter to write original songs.

Porter, who was experiencing a career slump after a debilitating horse-riding accident in 1937, was more than happy to provide the original songs, although they weren't up to the composer's usual high standards (in fact, The Pirate was a misfire for all involved; it was the only movie Garland made at MGM that lost money). Porter's score ranges from acceptable ("Love of My Life" and "Mack the Black") to atrocious ("Nina"), but he struck gold with the circus number Be a Clown, which is performed twice in The Pirate.

The first time around, Kelly and the incomparable The Nicholas Brothers perform Be a Clown as part of Serafin's circus act (clip below).


Be a Clown is reprised in the finale when Garland and Kelly perform the number in clown costumes (clip below).

Be a Clown came naturally to Porter who grew up in Peru, Ind., which bills itself as the Circus Capital of the World. At one time or another, several circuses had their headquarters in Peru (pronounced Pee-roo) and Porter was fascinated by the eccentric performers during his childhood. A friend of Porter's recalled that he loved to watch the elephants and horses rehearse their routines, and he enjoyed chatting up the circus folk, especially the "Wild Man of Borneo" who worked as a shoeshine man at a local barbershop during the winter months. Be a Clown's bouncy tune resembles calliope music, and the lyrics, which extol the virtues of comedy over tragedy, are quite typical of Porter's witty and elegant style. ("why be a great composer with your rent in arrears, why be a major poet and you'll owe it for years, when crowds'll pay to giggle if you wiggle your ears").

Despite The Pirate's poor showing at the box office, Be a Clown soon became a standard, and Porter came roaring back on Broadway with Kiss Me, Kate. MGM chief Louis B. Mayer* did his best to erase all memory of The Pirate by quickly casting Garland and Kelly in the wholesome Irving Berlin backstager Easter Parade (Fred Astaire replaced Kelly after he broke an ankle). However, Garland's joie de vivre and gift for knockabout comedy while performing Be a Clown must have gotten someone's attention because the "A Couple of Swells" number in Easter Parade is staged in a very similar, albeit more effective manner by director Charles Walters (clip below). Maybe it's just me, but I also think it helps that the more laidback Astaire isn't showboating as much as Kelly does in The Pirate.

Be a Clown also impacted Kelly's career, although in a more round-about way, via the "Make 'Em Laugh" number in Singin' in the Rain (1952). The all-time classic used songs written by producer Arthur Freed and Nacio Herb Brown, but Kelly and co-director Stanley Donen felt that the movie needed a high-energy song as a showcase for the acrobatic dancing of Donald O'Connor. Donen suggested that the writing partners use Be a Clown as a template, but the duo came back with a song that a shocked Donen later recalled as "100 percent plagiarism." Despite the director's misgivings, "Make 'Em Laugh" stayed in the picture (Freed was the producer, after all) and became the most memorable moment of O'Connor's career (clip below).  Porter, ever the gentleman, never uttered a word, although there really wasn't much he could do since MGM owned the rights to both songs.

I'll leave you with this clip of Garland performing Be a Clown in a 1964 episode of The Judy Garland Show. She performs both parts of the duet herself without ever missing a beat, which really showcases her unrivaled work ethic and charisma as a live performer.


Notes
* The conservative Mayer was so shocked by some of the mildly risque elements of The Pirate that he cut scenes from the movie and had the film stock burned.

Article sources:
Get Happy: The Life of Judy Garland by Gerald Clarke
Gotta Sing, Gotta Dance: A Pictorial History of Film Musicals by John Kobal
The Rough Guide to Film Musicals by David Parkinson
The Songs of Hollywood by Philip Furia and Laurie Patterson

The Pirate will air at 4 pm Aug. 19 on TCM. Also streaming on FilmStruck and available on DVD and video on demand.