The Trouble With Angels 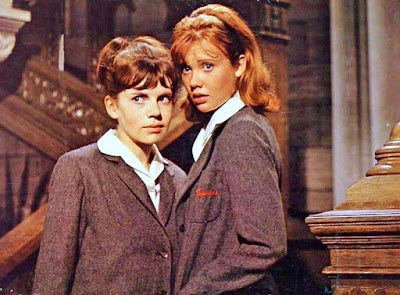 This article is part of The Ida Lupino Centenary Blogathon hosted by Maddy Loves Her Classic Films.

The biggest hit of Ida Lupino's film-directing career was The Trouble With Angels, a 1966 comedy about two teenage girls (Hayley Mills and June Harding) who wreak havoc at a Catholic girls school.

The Trouble With Angels begins when the rebellious Mary Clancy (Mills) and the awkward Rachel Devery (Harding) begin their first of three years at the all-girls Catholic school, St. Francis Academy. Mary and Rachel quickly get into trouble for giving their teachers fake names -- Fleur de Lis for Rachel and Kim Novak for Mary -- that lands them in the office of the formidable Mother Superior (a majestic Rosalind Russell). The duo quickly become the bane of Mother Superior's existence by skipping swimming lessons, smoking in the basement, and even giving guided tours of the nuns' living quarters. However, as the girls near graduation, they both discover a more tender side to Mother Superior, which draws Mary into a life-changing decision. 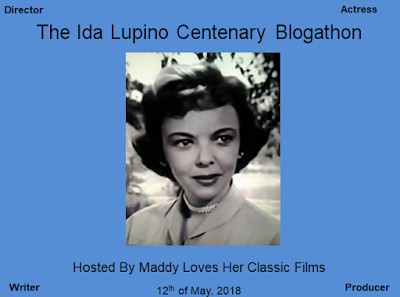 The Trouble With Angels is based on the autobiographical novel Life with Mother Superior by Jane Trahey, which deals with her experiences at a Catholic girls school called Mundelein College in Chicago (Incidentally, Mundelein's most famous graduate is Academy Award-winning actor Mercedes McCambridge). Producer William Frye bought the rights in the hopes of luring Greta Garbo out of retirement to play Mother Superior, but, when that didn't work out, he opted for Rosalind Russell, who hadn't appeared onscreen since playing Rose in the 1962 version of Gypsy.

Lupino, who was at that time a successful TV director, was tapped to direct her first feature film since The Bigamist in 1953. She expertly helmed the project to decent reviews and, more importantly, big box-office numbers. In fact, The Trouble With Angels was so popular that it spawned a sequel Where Angels Go, Trouble Follows (1968) with Russell reprising her role as Mother Superior, although neither Lupino, Mills, nor Harding returned for this movie.

Today, The Trouble With Angels is something of a cult classic, especially among those who have fond memories of attending Catholic girls school. It has glowing user reviews on sites like IMDB and the TCM Database and strong word of mouth (the librarian who checked out my DVD told me this was her favorite movie of all time).  Even for those who didn't attend Catholic school, the film brings back fond memories of disastrous home-economics projects, terrible marching bands, and awkward department-store brassiere fittings.

The Trouble With Angels also has a particular resonance as one of the few films in old Hollywood history that deal with an almost exclusively female world. There are some peripheral male characters in The Trouble With Angels such as Mary's guardian (Kent Smith) and Rachel's former teacher (Jim Hutton), but none of the girls have boyfriends, and there's only a passing mention of male/female attraction with a joking reference to Rachel's crush on Burt Lancaster (we're with her there).

The lack of men does not limit the lives of the characters in The Trouble With the Angels; instead it allows the girls to discover themselves, especially the rebellious Mary who hides her sensitive nature underneath a front of defiant bravado. In fact Mills portrayal of Mary is somewhat similar to some of Lupino's early film performances (watch the way Mills holds a cigarette; it's just like Lupino). Like all teenagers, Mary tests the limits of her world through mildly daring acts like smoking in the bathroom and skipping class, but she also learns a lot about herself in the process. In one of the great directing feats of her career, Lupino cannily shows how Mary's newfound self-awareness both liberates and terrifies her.

Mills does great work as Mary, but the film really belongs to Russell who is a force of nature as Mother Superior. Russell portrays the character as a no-nonsense schoolmarm for the first half of the film, but as the movie progresses, Lupino and Russell gradually reveal Mother Superior as a much more complex figure whose laughter, love, and even grief touch the hearts of her students.

I'll leave you with Jerry Goldmith's groovy score, which is one of my favorite swinging sixties jams.

The Trouble With Angels is available on DVD and video on demand.