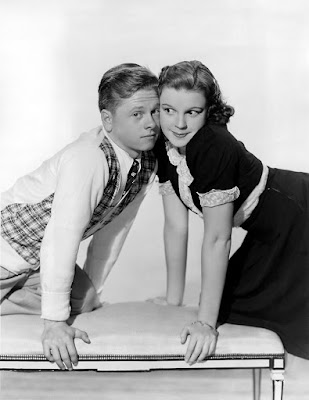 Photo of the Week (Monday, May 14 daytime) 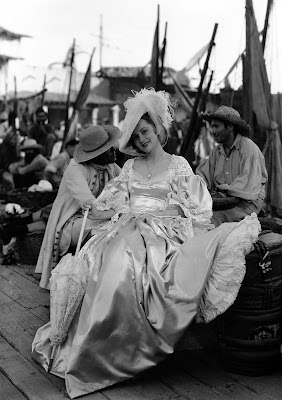 Captain Blood (1935) at 3:30 pm Monday: Olivia de Havilland relaxes on the set of this pirate saga, which was her first film with costar Errol Flynn and director Michael Curtiz.
More swashbucklers: Captain Blood is part of a daytime lineup of swashbucklers that includes more Flynn in The Sea Hawk (1940) at 11:15 am, Stewart Granger in Scaramouche (1952) at 1:30 pm, and Gene Kelly in The Three Musketeers (1948) at 5:45 pm.

TCM is airing a night of films based on a fairy tales that make great family viewing. My top picks are The Wonderful World of the Brothers Grimm (1962) at 10 pm, which features beautiful scenery and wonderful special effects from George Pal, and the lovely retelling of Cinderella, The Slipper and the Rose (1976) at 12:30 am. Other films include Danny Kaye in the fanciful biopic Hans Christian Andersen (1952) at 8 pm and Bud Abbott and Lou Costello in a fun re-imagining of Jack and the Beanstalk (1952) at 3 am. 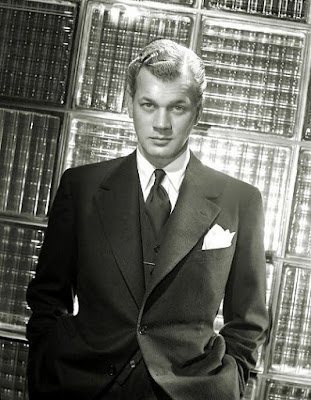 Joseph Cotten was born May 15, 1905, in Petersburg, Va., as the son of a postmaster and his wife. He showed an early interest in acting and eventually landed on Broadway where he became a star with Orson Welles' Mercury Theatre company and in the stage version of The Philadelphia Story. Cotten made his feature film debut in Welles' landmark film Citizen Kane (1941) at 5:45 pm. He and Welles continued to work together on the spy saga Journey Into Fear (1942) at 4:30 pm (Cotten stars and he and Welles wrote the script) and The Third Man (1949) at 2:30 pm. Cotten continued to work steadily in the 1950s in films like the excellent thrillers The Steel Trap (1952) at 9:15 am (Jo plays a banker who has a change of heart after embezzling money) and The Man with a Cloak (1951) at 10:45 am (Jo and Barbara Stanwyck are both a little long in the tooth for this Gaslight redux, but the movie's still a lot of fun). Cotten took on character parts in his later career in films like Hush. . . Hush, Sweet Charlotte (1964) at 12:15 pm.

TCM is airing 15 of the 16 Andy Hardy movies starting with the first film, A Family Affair (1936) at 8 pm, which features Lionel Barrymore and Spring Byington as Judge Hardy and his wife and children Marion (Cecilia Parker) and Andy (Mickey Rooney). Julie Haydon plays the Hardy's adult daughter in this film, but she does not appear in the rest of the series. In the second film, You're Only Young Once (1938) at 9:15 pm, Lewis Stone and Fay Holden take over the roles of the Hardy parents, and Ann Rutherford makes her first appearance as Andy's main squeeze, Polly Benedict. The late night lineup starts with Judge Hardy's Children (1938) at 10:45 pm and ends with Andy Hardy Gets Spring Fever (1939) at 5 am.

The Andy Hardy movies continue starting with Judge Hardy and Son (1939) at 6:30 am and ending with Andy Hardy Comes Home (1958) at 6:30 pm. In the last film, Andy (Mickey Rooney) is a middle-aged man who returns to his hometown for a business deal.
TCM is airing all four of the Five Little Peppers movies, starting with Five Little Peppers and How They Grew (1939) at 8 pm and ending with Five Little Peppers in Trouble (1940) at 11:45 pm. This Columbia Pictures series was based on the beloved children's books by Margaret Sidney about the daily life of a widowed mother (Dorothy Peterson) and her five children (Edith Fellows; Charles Peck; Tommy Bond, and Dorothy Ann Seese. Jimmy Leake played Davie in the first film; thereafter the role was taken over by Bobby Larson).
The late night lineup features the first three of MGM's Dr. Kildare movies starring Lew Ayres, Lionel Barrymore, and Laraine Day: Young Dr. Kildare (1938) at 1 am, Calling Dr. Kildare (1939) at 2:30 am, and The Secret of Dr. Kildare (1939) at 4:15 am.

Star of the Month: Marlene Dietrich (Thursday, May 17 prime time and late night) 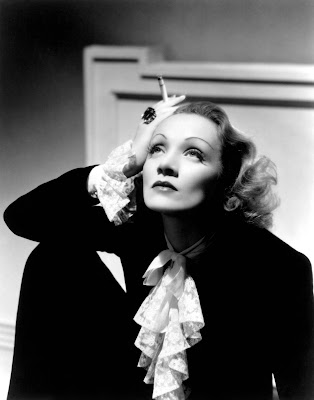 TCM is airing four of the glamorous star's mid-thirties movies on Thursday. Here's the lineup:
Angel (1937) at 8 pm: This Ernst Lubitsch-directed film finds Dietrich as a bored diplomat's wife who travels to Paris and finds romance with a suave Melvyn Douglas. This film is too archly sophisticated for its own good, but Marlene looks sensational and Douglas, one of old Hollywood's true professionals, gives an exceptional performance.
The Devil Is a Woman (1935) at 10 pm: The final collaboration between Dietrich and director Josef von Sternberg, this drama about a man-eating factory worker can best be described as "Marlene Dietrich's Carmen."
Desire (1936) at 11:45 pm: Dietrich and Gary Cooper re-team for this charming Lubitsch rom-com about an unsophisticated Yank (Cooper) who falls for a glamorous jewel thief (Dietrich, posing like her life depended on it). Every scene crackles with the stars' considerable chemistry.
Knight Without Armour (1937) at 1:30 am: This lavish historical drama has Dietrich as a Russian countess who tries to escape the 1917 Revolution with the help of a British spy (Robert Donat). This is a fairly gripping thriller, and Dietrich really goes for it in her performance, although she probably should have dialed down the glamour a few notches (you can't really spend hours on hair and makeup when you're fleeing the Bolsheviks).

Discovery of the Week (Friday, May 18 prime time) 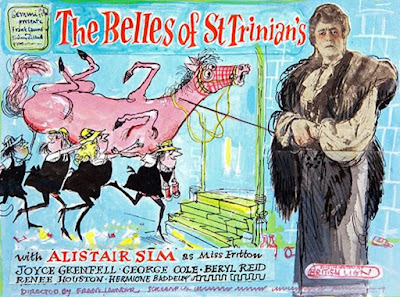 The Belles of St. Trinian's (1954) at 10 pm Friday: This delightful British film about the free-spirited students at an eccentric girls school features the great comic actor Alastair Sim in a dual role as the dotty headmistress and her scheming bookie brother. This movie launched a series of films about St. Trinian's.
More Sim: The Belles of St. Trinian's is airing as part of a night of Sim comedies that includes School for Scoundrels (1960) at 8 pm (Sim plays a smarmy life coach)  and Laughter in Paradise (1951) at midnight (Sim plays a practical joker who leaves his family a fortune on the condition that they carry out his outlandish schemes).

Crime Wave (1954) at midnight Saturday night/Sunday morning and 10 am Sunday: This B-movie from director Andre De Toth features Gene Nelson as an ex-con whose former gang crashes into his apartment. Sterling Hayden plays the cop who is on their trail. There's great location shooting in and around Los Angeles.

This Week's Classic Movie You Should See (Sunday, May 20 daytime)

To Be or Not to Be (1942) at 11:30 am Sunday: From my review, "To Be or Not to Be is still an astonishing accomplishment more than 70 years after the movie was released. It is both a satire that punctures the silly pomposity of the Nazi regime and a powerful expose of the evil of Hitler's final solution."

Movie of the Week (Sunday, May 20 prime time)


The Enchanted Cottage (1945) at 8 pm Sunday: This beautiful movie about an injured war veteran (Robert Young) and a "homely" woman (Dorothy McGuire, who doesn't look homely to me) who find love at a secluded cottage often gets hit with the schmaltz tag, but as Robert Osborne rightly points out in the clip above, it's an ultimately beautiful film that is an uplifting experience for anyone who watches it.

Performance of the Week/Silent Sunday Night May 20th edition

La Boheme (1926) at midnight Sunday night/Monday morning: Lillian Gish gives one of the great silent movie performances as the sickly Parisian Mimi in this dramatic adaptation of the Puccini opera. Gish did not eat or drink for three days before filming her famous death scene, which caused the terrified director King Vidor to believe she was really expiring on camera.