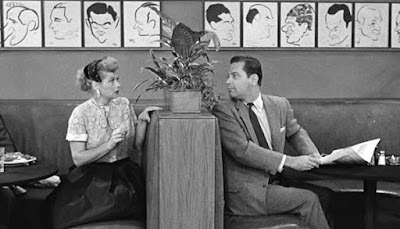 Lucille Ball and William Holden in the "L.A. at Last!" episode of I Love Lucy.

This article is part of The Third Golden Boy Blogathon: A William Holden Centenary Celebration hosted by The Wonderful World of Cinema, The Flapper Dame, and Love Letters to Old Hollywood.

The classic TV series I Love Lucy featured a bevy of old Hollywood stars in its landmark fourth season. Leading man and all-around dreamboat William Holden appeared in the memorable 17th episode "L.A. at Last!," which features two of the funniest moments in TV history.

When "L.A. at Last!" begins, bandleader Ricky Ricardo (Desi Arnaz), his wife, Lucy (Lucille Ball), and pals Fred and Ethel Mertz (William Frawley and Vivian Vance) have just arrived in Hollywood, where Ricky is going to star in a musical version of Don Juan. While Ricky gets to work at the studio, Lucy, Fred, and Ethel decide to go star-hunting at the famed The Brown Derby restaurant when, much to their excitement, William Holden sets down in the booth next to them. Lucy's gawking soon gets on Holden's nerves, so he decides to turn the tables with hilarious results. Later, Ricky, who doesn't know about the embarrassing incident at the restaurant, brings Holden home to meet Lucy, who dons an elaborate disguise in the hopes that the movie star won't recognize her. 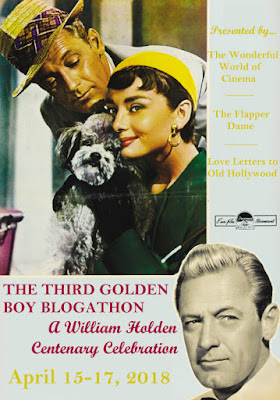 By its third season, I Love Lucy was a TV and cultural juggernaut, but writers Bob Carroll, Jr., Jess Oppenheimer, and Madelyn Pugh were having difficulties coming up with fresh material based on the domestic situations that were the show's bread and butter. Also, a two-episode guest stint in season three by singer and TV host Tennessee Ernie Ford was a ratings winner (Ford would return for season four episode "Tennessee Bound"), and CBS executives were pressuring I Love Lucy's producers to have more high-profile guest stars on the series. The runaway success of the comedy film The Long, Long Trailer (1954), in which Ball and Arnaz played characters very similar to the Ricardos, also made it seem natural that Ricky would one day go to Hollywood to make a movie.

With that in mind, the writers decided to move I Love Lucy to Hollywood for the second half of the fourth season with the first celebrity guest star being Holden. The actor, who was then one of the biggest box-office draws in Hollywood, agreed to take on the part for free -- he and Ball were old pals who starred together in the 1949 romantic comedy Miss Grant Takes Richmond -- but Paramount Pictures did insist that the actor promote his new film The Country Girl (1954) during the episode (I've often wondered how effective those promos were amidst all the hilarity, but, it certainly didn't hurt anything: Holden's costar Grace Kelly won a surprise Academy Award for her performance in The Country Girl a little over a month after "L.A. at Last!" aired. BTW, you can read my review of The Country Girl here).

The episode was an immediate sensation with congratulatory telegrams flooding in to Desilu studios, including one from silent star Colleen Moore, according to The "I Love Lucy" Book by Bart Andrews. "Your program last night was the funniest I have ever seen anyplace, anywhere, and your scene with the putty nose should go down in history," Moore opined. In fact, "L.A. at Last" would become something of a touchstone for the series with later guest stars often referring to what "Bill Holden" told them about Lucy Ricardo's antics.

Although Ball and the writing team were the comic geniuses behind "L.A. at Last!," Holden certainly deserves a lot of credit for the episode's legendary status. First of all, it takes a special kind of person to gamely submit to being splattered with applesauce pie (explanation below), but his guest-starring turn also has to be considered as one of the great straight-man performances in TV history. It says a great deal about Holden's often underrated acting skills that he withstands probably THE funniest performance in TV history without ever breaking character; only a really, really good actor and true professional could have gone through those two scenes without collapsing into helpless laughter. Incidentally, Holden was often recognized in later years for his guest appearance on I Love Lucy, especially when he was overseas, according to The "I Love Lucy" book.


Here's some more information about "L.A. at Last!" 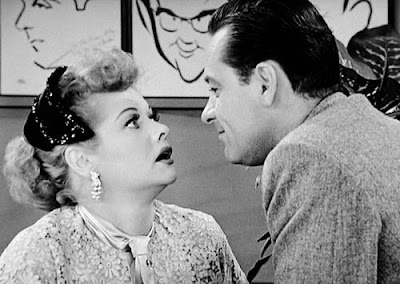 Lucy, Fred, and Ethel's celebrity-spotting site was the legendary Hollywood watering hole The Brown Derby (there were several locations in the L.A. area, but the North Vine Street restaurant is depicted in the show). The eatery was near the Hollywood studios, and it attracted a starry clientele through the years because of its homemade comfort food, clubby atmosphere, and table-side phone service.
The spaghetti and meatballs that Lucy orders were on the menu in 1954, but the restaurant's signature dish was the Cobb salad, which is what Holden orders. The Brown Derby's best-known dessert was grapefruit cake, but the pastry that splattered Holden was a specially designed pie made of applesauce and whipped cream. 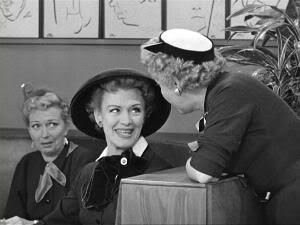 The beloved character actor Eve Arden was filming the sitcom Our Miss Brooks on the soundstage next to I Love Lucy when producers asked her to pop over for a cameo scene in "L.A. at Last!"

I Love Lucy makeup artist Hal King designed Lucy's fake proboscis out of cement, plastic, and putty, and he fashioned a wick at the end so it would catch on fire when Holden attempts to light Lucy's cigarette. Ball was understandably nervous that her real nose would catch on fire, but, ever the trooper, when the night of filming came she pulled it off without a hitch and even ad-libbed the hilarious moment when Lucy dips her nose in a cup of coffee.