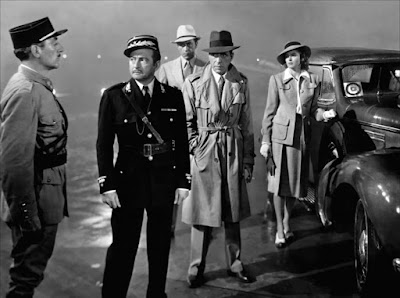 Casablanca (1942) is airing this Wednesday night on TCM as part of an all-day lineup of movies directed by Michael Curtiz.

This week's Wednesday spotlight on the films of directors Michael Curtiz features some of his best movies, including all-time classic Casablanca (1942), film noir Mildred Pierce (1945), and musical Yankee Doodle Dandy (1942). There's also more William Holden movies on Monday and a birthday tribute to comedian Harold Lloyd on Friday. Note: All times are ET and the highlighted text has links to full-length articles.

Here's the link to the complete schedule for April 16-April 22.

Three from Boris Karloff (plus one from Bela Lugosi) (Monday, April 16 daytime)

TCM's Monday lineup of movies about digging up the dead features three films from horror icon Boris Karloff. First, he plays an innocent man who is executed and then brought back from the dead in The Walking Dead (1936) at 10 am. Next are two RKO Pictures horror films produced by Val Lewton. In The Body Snatcher (1945) at 11:15 am, Karloff and fellow horror star Bela Lugosi team up for an eerie adaptation of the Robert Louis Stevenson tale. In Isle of the Dead (1945) at 12:45 pm, Karloff is one of a group of visitors stranded on a creepy Greek island that may be inhabited by a vampire.

Not Karloff, but still great: Christopher Lee takes over the title role from Karloff in the stylish Hammer Films adaptation of The Mummy (1959) at 2 pm.

This week's star of the month tribute to William Holden features the all-time great romance Love Is a Many Splendored Thing (1955) at 12:15 am Monday night/Tuesday morning. TCM does show this one a lot, but it never gets old for me, especially Jones' sensitive performance as a doctor who is torn between her traditional Chinese upbringing and handsome reporter Holden. However, the real treats are the romantic comedies Apartment for Peggy (1948) at 2:15 am and Father Is a Bachelor (1950) at 4 am. The first film has newlyweds Bill and Jeanne Crain befriending a depressed college professor (a wonderful Edmund Gwenn), while the second movie is a real charmer about a ne'er do well (Holden) who takes in five orphaned children (Coleen Gray is his love interest).

TCM is airing an all-day lineup of Nelson Eddy-Jeanette MacDonald musicals on Tuesday. The lineup includes three of my favorite Singing Sweethearts movies: Naughty Marietta (1935) at 6 am, Rose Marie (1936) at 8 am, and Maytime (1937) at 10 am. I recently compiled a list of my top five Eddy-MacDonald musical numbers for The Singing Sweethearts Blogathon. Here's a link to the article.


Curse of the Demon (1958) at 9:45 pm Tuesday: If you've never seen this supernatural thriller about a skeptical professor (Dana Andrews) who is investigating the mysterious death of a colleague (Maurice Denham) then prepare yourself for one of the wildest rides in the annals of classic horror films. Directed by horror veteran Jacques Tourneur, this movie is both kind of cornball (the special effects are not convincing) and deeply terrifying with one of the strangest and most unexpected twist endings I've ever seen. Curse of the Demon is part of a night of films starring Irish actor Peggy Cummins (her name is misspelled in the trailer).
More Peggy: Cummins plays one of noir's most indelible femmes fatale in the sensational crime movie Gun Crazy (1950) at 8 pm.

Actor Joan Crawford and director Michael Curtiz made two great movies together that blend elements of the woman's picture and film noir: In Flamingo Road (1949) at 10 am Wednesday Joan rises from belly dancer to political power player. Her Academy Award-winning performance as Mildred Pierce (1945) at 10 pm find Joan on a journey from pie-baking housewife to restaurateur. 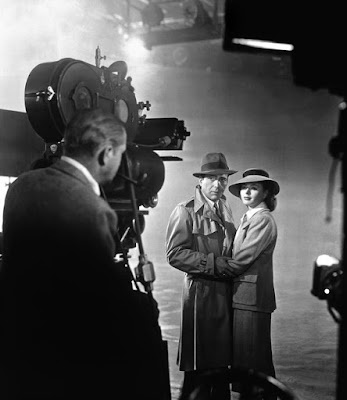 Casablanca (1942) at 8 pm Wednesday: Cinematographer Arthur Edeson films Humphrey Bogart and Ingrid Bergman in the final scene of this all-time classic about two lovers who are separated by their sense of duty during World War II. 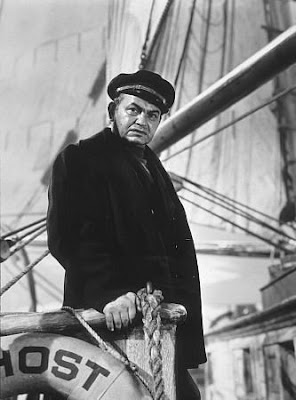 The Sea Wolf (1941) at 4:30 am Wednesday night/Thursday morning: Edward G. Robinson's performance as a ruthlessly amoral sea captain in this Jack London adaptation is one of the great roles in the actor's legendary career.  This film has a superb script, crisp direction and great supporting performances (especially Gene Lockhart and Ida Lupino), but Robinson transcends the material to give a towering performance that speaks to both the fascism that was prevalent in the 1940s and the seductive lure of authoritarianism in our own time.
More late night picks: If you're staying up late/setting your DVR for The Sea Wolf, why not catch two more great Michael Curtiz-directed movies: The musical Yankee Doodle Dandy (1942) at midnight and the family film Life with Father (1947) at 2:15 am.


Great Expectations (1946) at 8 pm Thursday: English director David Lean's masterpiece about an orphaned boy, Pip (Anthony Wager as a child, John Mills as an adult), who has a mysterious benefactor is the supreme screen adaptation of Charles Dickens' novel. Great Expectations made international stars out of Mills, Jean Simmons, and Alec Guinness (they play Pip's love interest and best friend respectively), but, more importantly, the film is both a humorous and melancholy meditation on Dickens' favored themes of money, class, and love.
More Victorian literature: I also have a soft spot for director John Schlesinger's 1967 adaptation of the Thomas Hardy novel, Far From the Madding Crowd, especially the beautiful location shooting in England's West Country and Julie Christie's wonderful performance as the headstrong Bathsheba Everdene. It's airing at 10:15 pm Thursday. 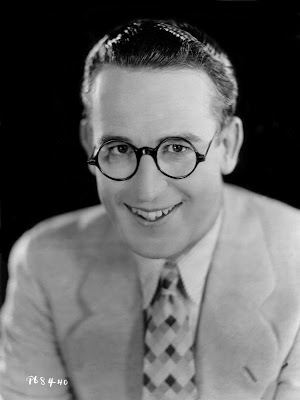 The great comedian was born April 20, 1893, in Burchard, Neb. He and his father moved to Southern California in 1912, and Lloyd eventually broke into the movie business, where he became a popular comedian in short films like Haunted Spooks (1921) at 7:45 am. Lloyd established his screen persona of a meek, glasses-wearing young man who gets into unexpected scrapes in movies like Grandma's Boy (1922) at 9 am, and he was one of the top stars in silents by the time he made The Kid Brother (1927) at 11:30 am. Lloyd continued to have success in the 1930s, especially in the very funny comedy The Milky Way (1936) at 2:45 pm, in which Lloyd plays a meek milkman who is recruited by a fast-talking boxing promoter (Adolphe Menjou). Lloyd retired after making The Sins of Harold Diddlebock (1947) at 4:30 pm, but he later toured the country with a compilation of his old movies called Funny Side of Life at 6:15 pm. 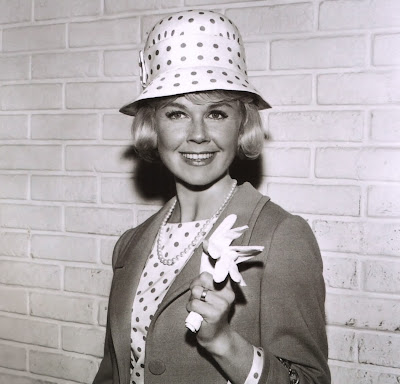 The Thrill of It All (1963) at 8 pm Friday: The romantic comedies Doris Day made in the 1950s and 1960s are great light entertainment, but they also have a lot of relevance for women in the 21st century. The Thrill of It All deals with work-home balance as housewife Doris becomes a popular advertising spokesperson much to the chagrin of husband James Garner.

The Bank Dick (1940) at noon Saturday: W.C. Fields swallows a cigarette in this fast and funny comedy about a hen-pecked husband who becomes an unexpected hero. 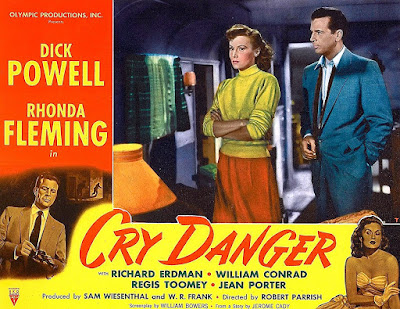 Cry Danger (1951) at 12:15 am Saturday night/Sunday morning and 10 am Sunday morning: Noir icon Dick Powell is framed for robbery and murder so, when he gets out of prison, he decides to lead a life of quiet contemplation at a rural monastery. Just kidding 😁: In the film, Powell goes after the men who framed him and reignites sparks with former flame Rhonda Fleming, who happens to be the wife of Powell's best friend (he's still in the clink on false charges).

The Swan (1956) at 6 pm Sunday: If, like me, you simply can't wait for the May 19th nuptials of Prince Harry and Meghan Markle, then get your royalty fix with this charming romance about a beautiful princess (future Serene Highness of Monaco Grace Kelly) who is being pushed by her domineering mother (a hilarious Jessie Royce Landis) to marry an awkward prince (Alec Guinness). 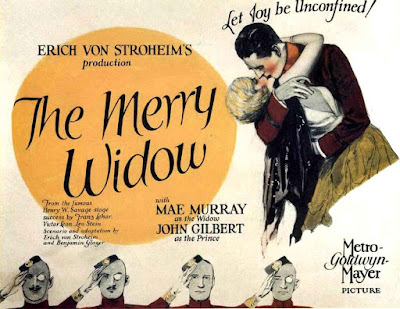 The Merry Widow (1925) at 12:15 am Sunday night/Monday morning: The idea of Franz Lehar's famous operetta being made into a silent film might seem odd to modern audiences, but there's a lot to like here, especially a swoon-worthy John Gilbert, MGM's first-rate production values, and director Erich von Stroheim's slyly humorous touches.