Ida Lupino at 100: The Hitch-Hiker 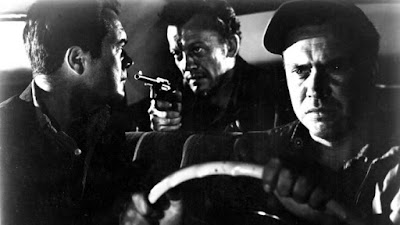 This article is part of The Free for All Classic Film Blogathon presented by Cinemaven's Essays From the Couch.

The Free for All Blogathon gives bloggers the chance to write about any classic movie-related subject they choose. I've decided to celebrate actor and director Ida Lupino's 100th birthday (she was born Feb. 4, 1918, in London) by writing about the best-known movie she directed, the film noir The Hitch-Hiker (1953). In my opinion, The Hitch-Hiker, which is about two friends who are kidnapped by a psychotic killer, is an underrated masterpiece of the noir genre.

The Hitch-Hiker begins when buddies Gilbert Bowen (Frank Lovejoy) and Roy Collins (Lupino regular Edmond O'Brien) are heading to Mexico for a fishing trip and perhaps a little illicit fun (they told their wives they were going to Arizona). However, what happens in Mexicali doesn't stay in Mexicali when the men pick up a hitch-hiker named Emmett Myers (Perry Mason alum William Talman, who is a long, long way from L.A. district court). Emmett turns out to be a psychotic serial killer, and he uses the men and their car to drive him to a getaway on the Gulf of California. 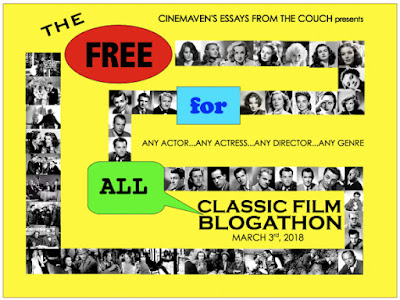 The Hitch-Hiker is based on the notorious case of Billy Cook, Jr., a drifter from Joplin, Mo., who went on a killing spree throughout the Southwest U.S. in 1950. Cook eventually kidnapped two men on a hunting trip and forced them to drive him to Santa Rosalia, Mexico, where he was recognized and arrested by local law enforcement. Blacklisted screenwriter Daniel Mainwaring wrote an original story based on Cook's crimes, which Lupino and her husband and producing partner Collier Young then turned into an original screenplay. Lupino interviewed one of the two hunters kidnapped by Cook, and she added several authentic details to the script, including the place of Cook's arrest and his paralyzed eye.

The low-budget movie was made on location in California's Alabama Hills (classic movie fans will recognize the scenery from Gunga Din, Bad Day at Black Rock and countless Westerns), and as usual with Lupino's projects it came in on schedule and on budget. The movie was a hit at the box office; in fact, it did so well that RKO Pictures received letters of complaint from hitchhikers across the US and a publication called the Hobo News said the movie's sensational publicity (sample tagline: "who'll be his next victim. . .YOU?") was a threat to the existence of "highway nomads," according to the American Film Institute. 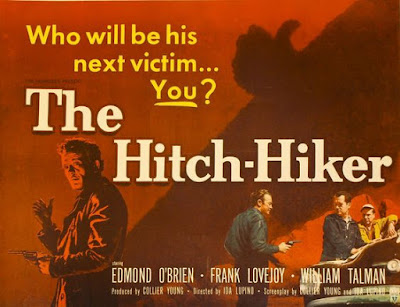 The Hitch-Hiker received mixed reactions from critics in 1953 and remained largely unheralded for several decades. It experienced a revival in the 1990s because of renewed interest in both Lupino's career and the noir style. The Hitch-Hiker has received glowing write-ups from several prominent critics, but, even so, it still hasn't quite earned its place in the annals of noir's true classics.

This is unfair for several reasons, including the fact that Lupino was the only female director who made noirs in the 1940s and 1950s. Plus, The Hitch-Hiker is simply a sensational film, and Lupino uses all of her considerable directorial skills to make a nail-biting thriller that is a masterpiece of suspense. 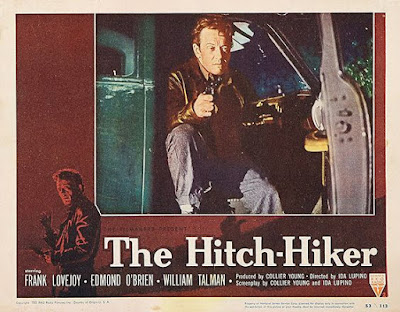 Lupino very rarely gets mentioned as one of noir's true auteurs, but her control over the script and the direction of The Hitch-Hiker makes her one of noir's few writer/director combos (John Huston and Billy Wilder also come to mind). In fact, the script for The Hitch-Hiker is nothing less than brilliant starting with its ripped from the headlines prologue right through to its slightly ambiguous, melancholy final scene.
The Hitch-Hiker script is also a model of narrative efficiency. Lupino and Young give the audience information about the characters in just a few simple lines of dialogue. For example, we learn that Gilbert is a principled family man and Roy is more hot-headed and yearning for adventure in a simple dialogue scene at the beginning of the movie.

The great cinematographer Nicholas Musuraca was the director of photography for The Hitch-Hiker, and he achieved some of the best work of his career under Lupino's direction. The film's opening montage is a masterpiece of pure cinema: The story of Emmett's crime spree is told without one word of dialogue being spoken.

Lupino and Musuraca also achieve a great deal of tension by using wide shots of the vastness of the desert to depict the vulnerability and isolation of Gilbert and Roy, and their use of shadows and light in the night scenes are a true tour de force. The reveal of Emmett's face and his gun is one noir's great moments, but it is topped by a terrifying scene of a car with headlights blazing barreling down on Gilbert and Roy.

Lupino was one of noir's great actors, but she also knew how to get the best work from her actors while directing a film. All three leads in The Hitch-Hiker give performances of some distinction, especially considering the movie's status as a low-budget B movie. Both O'Brien and Lovejoy turn in their usual excellent work (Lovejoy is particularly fine in a scene where he interacts with a young girl (Kathy Riggins) who reminds him of his daughter), but Talman is the standout here. He plays Emmett as a natural born killer with a creepy, charismatic energy and his leather-jacket wearing defiance makes him come across as a less vulnerable version of James Dean.


The Hitch-Hiker is available on DVD and video on demand. Also, it's in the public domain so you can find it  for free on some streaming services available through Roku.