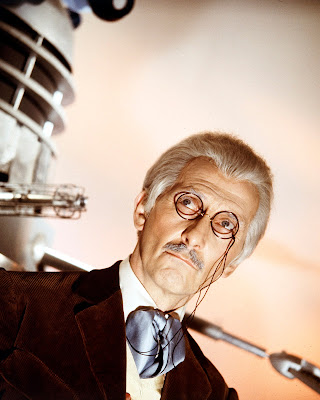 This article is part of the Time Travel Blogathon hosted by Wide Screen World and Silver Screenings.

The BBC TV series Doctor Who has been going strong for more than 50 years, but it was a relatively new science-fiction show when Peter Cushing played the iconic time traveler in two sixties movie spin-offs. These films are still the only big-screen versions of The Doctor's adventures in time and space.

Doctor Who began in 1963 as a low-budget science-fiction show with a purpose of teaching children about history through the time -traveling adventures of a crotchety scientist known only as The Doctor (William Hartnell) and his teenage granddaughter Susan (Carole Ann Ford). The first serial, An Unearthly Child, followed these guidelines by sending The Doctor, Susan, and two schoolteachers (Jacqueline Hill and William Russell) into the distant past where they are kidnapped by a squabbling tribe of cavemen. 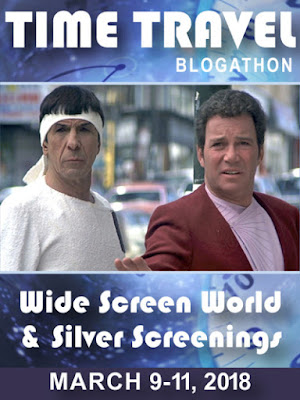 However, the series became a pop culture phenomenon when the second serial, The Daleks, began airing in December 1963. Writer Terry Nation abandoned the historical concept in favor of a dystopian story about two alien races, the Daleks and the Thals, whose planet has been devastated by nuclear war. While the tall, blond Thals are certainly something to behold, the undisputed stars of the episode are the fearsome Daleks. These hideous genetic mutations who are bent on exterminating everything and anything in their path must live inside an impregnable metal casing that has made them almost unstoppable killing machines (it's hard to explain what a Dalek looks like, but, if you've never seen one, just imagine R2-D2 from Star Wars with a plunger for arms and brightly colored ping pong balls for decoration).

The Daleks caught the imagination of the British public, especially children, and soon "Dalekmania" gripped the nation. The high TV ratings didn't go unnoticed by Max Rosenberg and Milton Subotsky, two shrewd American producers who were looking to become rivals of Hammer Films, the British studio that was famed for its output of low-budget but high-grossing horror/science fiction/action films. With that in mind, Rosenberg and Subotsky paid Nation 500 pounds for the rights to three Daleks serials and secured the services of Hammer regular Cushing for the title role. 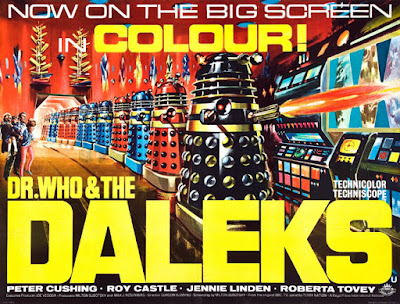 Dr. Who and the Daleks mostly follows the plot of The Daleks serial with a few key exceptions. The Doctor is not portrayed as a time lord from the planet Gallifrey; instead, he is a kindly elderly scientist who lives in London with his granddaughters Barbara (Jennie Linden) and Susan (Roberta Tovey). One day, The Doctor, his granddaughters, and Barbara's boyfriend, Ian (Roy Castle), are fiddling around in The Doctor's time machine when the bumbling Ian accidentally hits the controls. The group arrive at what appears to be a deserted forest with a city in the distance, which turns out to be the headquarters of the war-like Daleks

Dr. Who and the Daleks was a huge hit in 1965. There were long lines to get into screenings and British stores made so much money on toys and tie-in products that merchants dubbed their unexpected windfall "Dalek Christmas."

Viewed today, Dr. Who and the Daleks isn't nearly as good as the BBC serial it is based on; that particular episode creates a claustrophobic paranoia that still makes it a potent piece of entertainment more than 50 years after it first aired. Still, Dr. Who and the Daleks is fast-paced fun. The last 20 minutes are quite exciting, and Cushing is wonderful in the role (he had to plow through a lot of craziness in his long career, but he was always a professional who never turned in a bad performance).

However, the best aspect of Dr. Who and the Daleks is the cinematography, which gives viewers glorious Technicolor versions of the Daleks and the Thals. The poor Thals, who are always closely associated with the Daleks in Who mythology, never get their due, but their eye-popping fashion choices (DayGlo eye makeup; pixie haircuts; tie-dye capes) are the last word in swinging sixties style.

Dr. Who and the Daleks is available on DVD and video on demand. 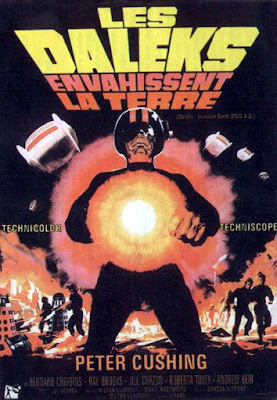 Rosenberg and Subotsky began planning their second Doctor Who movie before Dr. Who and the Daleks was finished shooting. Cushing and Tovey returned for Daleks -- Invasion Earth: 2150 A.D., which is based on the 1964 TV serial The Dalek Invasion of Earth.

This time around, The Doctor and Susan are joined by The Doctor's brainy niece Louise (Jill Curzon) and policeman Tom (Bernard Cribbins)  for a trip to the near future. Upon landing in London in the year 2150, the group finds that the Daleks have taken over London and are forcing the human population to become part of a large and mysterious mining operation in Bedfordshire. The Doctor and his companions soon join the underground resistance efforts to defeat the Daleks and uncover their evil scheme.

Daleks -- Invasion Earth: 2150 A.D. wasn't a huge hit, mostly because, by 1967, Dalekmania was no longer a pop culture phenomenon, and the prospect of seeing the menacing aliens in Technicolor wasn't as appealing.

Once again, Daleks -- Invasion Earth: 2150 A.D. isn't quite as good as its TV counterpart -- for one thing, we never see the Daleks actual invasion of London -- but it's still a great deal of fast-paced fun as long as you're willing to go along with the rather silly plot. The most satisfying part of the film is the final scene in which The Doctor returns to the present day to help the bumbling Tom become a hero.

Doctor Who is still going strong today -- the first female doctor, Jodie Whittaker, took over from Peter Capaldi in December -- but many fans still retain a nostalgic fondness for the two Doctor Who films,. If you've got an hour to spare, here's a link to a fun documentary about the making of the films and the Dalekmania craze. There's interviews with several members of the cast and crew and a look at some rare memorabilia.