1001 Classic Movies: Somebody Up There Likes Me 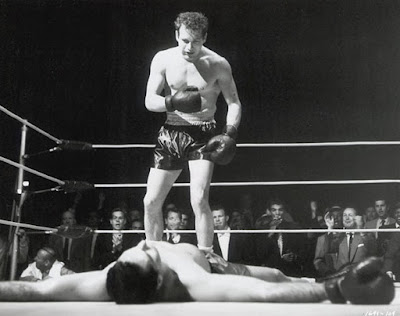 The screenshot above shows Paul Newman as boxer Rocky Graziano in the biopic Somebody Up There Likes Me (1956).

This week's 1001 classic movie you should see is the biopic Somebody Up There Likes Me (1956) about the early life and boxing career of famed middleweight champion Rocky Graziano (Paul Newman).

Somebody Up There Likes Me begins when Rocky Barbella (played by Terry Rangno as a child and Newman as a teenager and adult) is a juvenile delinquent whose run-ins with the law eventually lead him to a stint at Riker's Island and a dishonorable discharge from the U.S. Army. However, Rocky's uncanny ability with his fists grabs the attention of boxing manager Irving Cohen (Everett Sloane), who turns Rocky into the one of the top middleweight boxers in the nation until his past, in the form of an inmate (Robert Loggia) who served time with Rocky, resurfaces. The man attempts to blackmail Rocky while the fighter is on a quest for the middleweight championship. 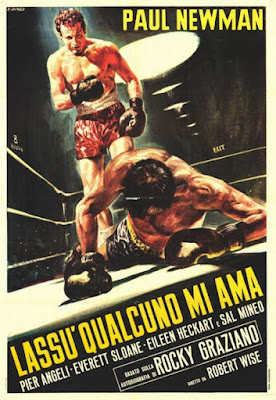 MGM brought the rights to Graziano's best-selling autobiography as a vehicle for James Dean. After Dean's untimely death in September 1955, the search began for another actor who could suitably play the part of Graziano. Director Robert Wise tested dozens of young men, including Rod Taylor, but he finally decided to hire Paul Newman, who was then an up-and-coming actor in need of a breakout film. Newman worked hard on the role, spending hours with Graziano to pick up his speech patterns and mannerisms, and his efforts paid off with a hit movie that both established Newman as Hollywood's hot new leading man and made Graziano a beloved American icon (for those too young to remember, Graziano's persona was much like that of George Foreman).

Somebody Up There Likes Me was one of the top 50 box-office hits of 1956, and it won Academy Awards for both cinematography and art direction.  Here's what to look for when you watch:

1. Final boxing scene: Wise is best remembered as the director of musicals like West Side Story (1960) and The Sound of Music (1965), but his crisp, fast-paced work on Somebody Up There Likes Me is perhaps his most exceptional piece of filmmaking. The movie's climatic fight scene is a masterclass in editing that influenced everything from Rocky (1976) to Raging Bull (1980).
2 New York City locales: The film's other great asset is its location shooting in Brooklyn and the Lower East Side. Locations like Stillman's Gym on 8th Avenue give a wonderful glimpse into the Big Apple in the 1950s.
3. Rocky's women: Newman is exceptional in Somebody Up There Likes Me, but his performance is significantly helped by outstanding work from Eileen Heckart as Rocky's often-despairing mother and Pier Angeli as his fiercely protective wife. Heckart, whose fearless performance is quite harrowing by old Hollywood standards, should have received an Oscar nomination.
4. Yiddish phrases: Rocky's colorful manager Irving Cohen (Everett Sloane) peppers his speech with Yiddish words and phrases like "chutzpah," "schmear," and most memorably "he's a meshuggeneh" in reference to Rocky's often unpredictable ways. Meshuggeneh, sometimes spelled mashugana, means someone who is crazy or senseless.

Other critics: Somebody Up There Likes Me has an 82 percent fresh rating on Rotten Tomatoes and Leonard Maltin praises this "top biography. . .with fine performance by Newman" in a 3.5 star review in his Classic Movie Guide. Critics in 1956 were quite favorable to the film, praising both Wise's direction and Newman's performance, but they heaped the most plaudits on Angeli with the Variety critic going out of his/her way to praise the actress' "beautiful sensitivity." The New York Times curmudgeonly critic Bosley Crowther actually seemed to enjoy himself while watching Somebody Up There Likes Me -- he called the final fight scene "one of the whoppingest slugfests we've ever seen on the silver screen" -- but he still registered his disapproval for the film's positive depiction of boxing.

The Bottom Line: Overall Somebody Up There Likes Me is a very watchable biopic with strong performances from Newman and the rest of the cast, but its expertly staged, photographed, and edited fight scenes elevate this film into a true old Hollywood classic.

Availability: Somebody Up There Likes Me was recently re-released on DVD by Warner Archive. It is also available on video on demand.