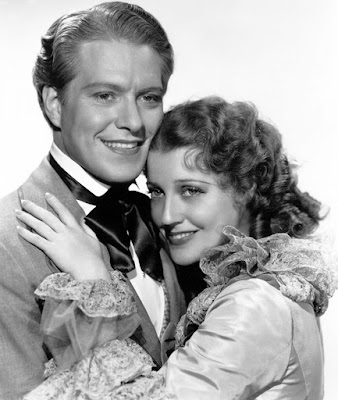 Nelson Eddy and Jeanette MacDonald (photo above from Maytime) were known as The Singing Sweethearts to their legions of fans.

This article is part of The Singing Sweethearts Blogathon hosted by Pure Entertainment Preservation Society.

Nelson Eddy and Jeanette MacDonald were a wildly popular screen team in the 1930s. Their legions of  adoring fans packed movie theaters, filled up scrapbooks with fan magazine clippings, and even named their children after the popular musical duo.

The baritone from Providence, R.I., and the soprano from Philadelphia were first paired in the smash hit Naughty Marietta (1935). They made seven more musicals for MGM that contained a winning formula of lavish sets and costumes, a wholesome love story, and, most importantly, Eddy and MacDonald belting out tunes at the top of their lungs. 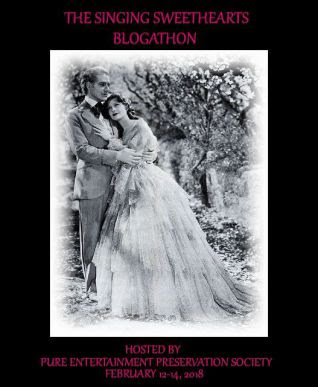 Today, Eddy and MacDonald are somewhat eclipsed by other thirties musicals like Fred Astaire and Ginger Rogers' RKO movies and Busby Berkeley's output for Warner Bros. Those films have a more modern style of music than the operettas favored by Eddy and MacDonald and their wisecracking style make them feel much fresher that the costume dramas that were Eddy and MacDonald's bread and butter.

Still, there's a lot to like about The Singing Sweethearts' filmography, especially MGM's always first rate production values (the beautiful MacDonald never looked less than stunning in Adrian's elaborate creations) and the fact that both Eddy and MacDonald were classically trained singers who could handle difficult arias with skill and grace.

With that in mind, here's my list of the top five Eddy-MacDonald musical numbers.


This lyrical love song from the 1924 operetta is Eddy and MacDonald's best-known duet. It's certainly been much parodied -- even those who haven't seen any classic movies are probably familiar with the "when I'm calling you-ooo-ooo" first line -- but in the context of the movie, the song has a certain haunting power. It's used a total of three times in the movie, but never more effectively than in the lakeside scene above. Eddy, who is playing a Canadian Mountie, explains the mythical origins of the tune (not included in the clip) and then the duo launch into an intricate version of the song (their harmonies are exceptional). 8 a.m. April 17 on TCM. DVD and iTunes.


While Eddy and MacDonald were certainly great together, their films always offered a solo number in which each star could show off their talents. Eddy was often given lively marching songs, the best of which is "Stouthearted Men" (I actually think it's the best thing about New Moon). If you've seen "The Glee Club" episode of The Wonder Years you'll have a special appreciation for this number, but, even if you haven't, there's a lot to like. The testosterone-fueled lyrics are kind of hilarious (example: "the strong obey when a strong man shows them the way"), and Eddy gets to show off his marching skills and iron lungs: At 2:43 he holds a note for what seems like forever (it's actually 14 seconds, according to my count). DVD and video on demand. 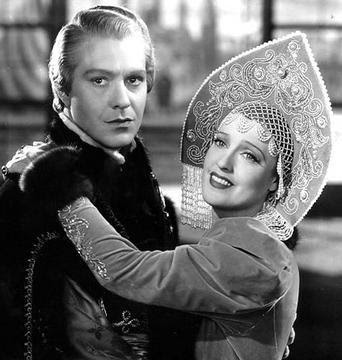 MGM pulled out all the stops for Eddy and MacDonald's 1937 musical, Maytime, including filming a mini-opera based on Russian composer Piotr Tchaikovsky's Fifth Symphony (I couldn't find a clip of the actual movie, but here's a lovely duet). Czaritza is staged brilliantly by director Robert Z. Leonard, who uses the scene to amplify and advance the plot of this film about a talented soprano (MacDonald) who is controlled by her Svengali-like manager/husband (John Barrymore). 5:45 p.m. ET March 30 and 10 a.m. ET April 17 on TCM. DVD and video on demand.


Despite their somewhat stodgy reputation, Eddy and MacDonald's films weren't all heavy-handed melodrama. In fact, there's a lot of lighter moments like the "Ham and Eggs" number in Maytime and this fun moment from their first film in which MacDonald unleashes her formidable pipes much to the astonishment of  Eddy's character. 5:15 a.m. ET  March 2 on TCM. DVD.

"Will You Remember" from Maytime


While "Indian Love Call" remains Eddy and MacDonald's best-known romantic duet, many fans consider this song from Maytime the pinnacle of Eddy and MacDonald's love ballads. It's certainly hard not to swoon when  Eddy and MacDonald's soaring voices reach the crescendo of "springtime, lovetime, May" while the apple blossoms fall gently around them. (the clip above shows Eddy's portion of the song; click here if you want to see MacDonald's).