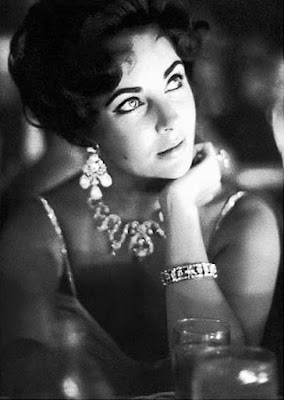 Elizabeth Taylor wearing some of the sparkling gems in her large jewelry collection.

This article is part of The Elizabeth Taylor Blogathon hosted by In the Good Old Days of Classic Hollywood.

Elizabeth Taylor's tumultuous love life often made the headlines, but there's one passion that she sustained for a lifetime. Taylor's famous love affair with jewelry reportedly began when she was an infant and continued throughout her eventful life as she collected some of the most precious gems on the face of the earth.

Taylor was born on Feb. 27, 1932, in London with a taste for all that sparkled and glittered. According to family legend, the infant Elizabeth didn't open her violet eyes until eight days after she was born when her gaze was attracted by a large diamond. "The first thing I saw was an engagement ring," she recounted in Elizabeth Taylor: My Love Affair With Jewelry. "I was hooked." 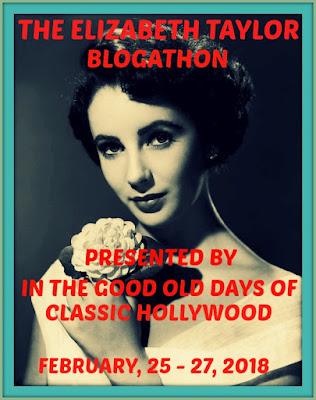 Taylor's passion for collecting jewelry began when she was a child star at MGM. After making Lassie Come Home in 1943, the 11-year-old actor used her salary to buy a lovely costume jewelry brooch with a flower design as a Mother's Day gift, which she presented to her beloved mother, Sara. As a teen, Taylor began wearing charm bracelets, which grew more elaborate as the years passed (Click on this link  for a slideshow of Taylor's gems that include the brooch she gave her mother and a charm bracelet she owned during her first marriage to Richard Burton).

Taylor really didn't begin seriously collecting gems until her engagement and marriage to hotel heir Conrad "Nicky" Hilton, Jr., in 1950. Hilton presented Taylor with a relatively modest, at least by Taylor's later standards, 4-carat diamond and platinum engagement ring that cost $10,000. The marriage to Hilton soon ended, but Taylor quickly rebounded with husband No. 2, English actor Michael Wilding, who presented her with a much more elaborate cabochon-cut sapphire ring that started a mini-trend for sapphire engagement rings in the early 1950s.

However, Taylor finally met a man who shared her extravagant taste when she married theater and film producer Mike Todd in 1957. The flamboyant Todd loved to shower Taylor with necklaces, earrings, and even a tiara, and she soon had a collection of sparkling gems that rivaled that of royalty.

This circa 1880 tiara made of mine-cut diamonds, platinum and gold was a gift from Todd. Taylor admired some of the jewels worn by the British royal family while at a state dinner at Buckingham Palace, so Todd bought her the stunning piece, telling his wife "'you're my queen, and I think you should have a tiara.'' Taylor debuted the piece at the 1957 Academy Awards and often wore it afterwards (even once while meeting Princess Margaret).

In true movie star fashion, Taylor was taking a dip in her backyard swimming pool -- while wearing her diamond tiara, no less --  when Todd presented her with this stunning Cartier jewelry set of a bracelet, earrings and a necklace made with Burmese rubies. There were no mirrors on hand so Taylor admired her new gems in the reflection of the pool. "The jewelry was glorious, red on blue like a painting," she remembered in My Love Affair With Jewelry.

The Krupp Diamond, AKA The Elizabeth Taylor Diamond

After Todd's tragic 1958 death in an airplane crash, Taylor was married to singer Eddie Fisher for a period of time, although, according to Taylor biography How to Be a Movie Star by William J. Mann, she found his taste in jewelry sorely lacking.

However, fifth (and eventually sixth) husband Richard Burton knew how to keep his lady love happy, at least as far as jewelry was concerned. During their tumultuous decade together, Burton often went jewelry shopping with Taylor: "I introduced her to beer; she introduced me to Bulgari" he liked to quip. Burton also showered Taylor with presents, including the world famous Krupp Diamond, which he bought for her in 1968 "just because it was a Tuesday."
The 33.19-carat Asscher-cut ring once belonged to a family of German industrialists and is rated as one of the purest diamonds in the world by the Gemological Institute of America. Taylor wore the ring almost every day -- the down-to-earth star would often urge others to try it on -- and she never ceased to marvel at its exquisite beauty.
After her death, the gem was renamed The Elizabeth Taylor Diamond. It sold at auction for a record $9.59 million, which was a pretty good return on Burton's $307,000 investment.

Burton outdid himself with this 69.12-carat pear-shaped stone. He purchased it at auction for a then record of $1 million after a bidding war between the Welsh actor, jeweler Harry Winston, the Sultan of Brunei, and shipping magnate Aristotle Onassis (Burton recorded in his diary that he was "a raving maniac" during the bidding).

The large stone was originally the property of billionaire Harriet Annenberg Ames, who kept it in a bank vault for years because she was too frightened to wear it on the streets of New York City. Taylor had the pear-shaped stone set as a necklace, and she debuted it at the 40th birthday party of Princess Grace of Monaco. Burton proudly crowed to his diary that Taylor outshone everyone at the party, including Grace herself. "Of course, nobody can wear it [the diamond] better," he concluded.
After the couple's divorce, Taylor sold the stone for around $4 million.

The most historic piece of jewelry owned by Taylor was this large stone that Burton bought for a Valentine's Day present. The pear-shaped pearl weighing 203 grains was found off the coast of Panama in the 16th century (the pearl's name means wanderer or pilgrim in Spanish) and was owned by members of the Spanish, French, and British royal families through the centuries until Burton picked it up at Sotheby's for $37,000.
Taylor had La Peregrina mounted as a necklace, and she often wore it, including in her cameo in the Tudor drama Anne of a Thousands Days (1969). Ironically, Burton plays the much-married English monarch Henry VIII and Henry's daughter, Queen Mary I, once owned the precious gem. In honor of that fact, Taylor and Burton donated a portrait of Mary wearing La Peregrina to the National Portrait Gallery.