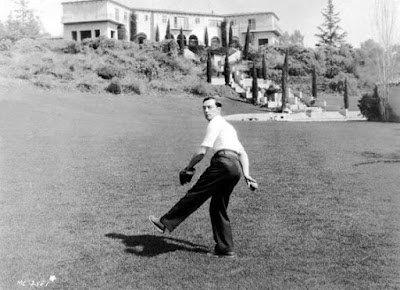 This article is part of The Fourth Annual Buster Keaton Blogathon hosted by Silent-ology.

There was nothing quite like being an old Hollywood movie star in the 1920s. Idols of the silver screen such as the great comic genius Buster Keaton were adored by millions around the globe. Their popularity ensured large salaries, which most spent freely on clothes, cars, and palatial homes. The most famous of silent movie mansions was Mary Pickford and Douglas Fairbanks' Pickfair estate, but Keaton also built a lavish home in Beverly Hills that befit his status as one of the top comedians/directors of silent cinema.

There was certainly nothing in Keaton's early years to predict that he would one day live in a Hollywood mansion. Keaton was born Joseph Frank Keaton on Oct. 4, 1895, in Piqua, Kan., to a family of vaudeville performers. Keaton first crawled on stage at 9 months old and, by the tender age of 3, he became a regular part of the family act. The young Buster had an uncanny ability to perform difficult pratfalls without hurting himself -- his nickname came from a turn-of-the-century slang term for a hard fall --  and he was a star on the traveling circuit before he was a teenager. 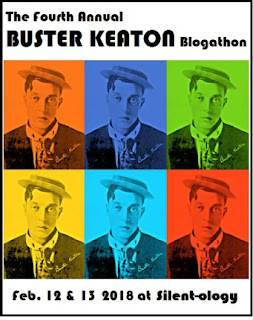 In 1917, Keaton got a break in the movies thanks to his old Vaudeville pal Roscoe "Fatty" Arbuckle. He soon developed an uncanny genius both for devising intricate slapstick bits and for editing and directing films. By the mid-1920s, Keaton was a popular actor/director of silent comedies whose career was being managed by powerful producer Joseph Schenck. In a roundabout way, Schenck also got Keaton a wife. Schenck was married to silent movie star Norma Talmadge, and he seems to have pushed a match between Buster and Norma's younger sister Natalie much to the chagrin of Norma and Natalie's domineering mother, Peg. The inodomitable Mrs. Talmadge wanted someone much more grand for her youngest daughter than a knockabout comedian in a pork pie hat.

In any case, Talmadge and Keaton were married in 1921. Two sons soon followed, and Keaton began looking for a proper home for his young family although nothing seemed to suit Natalie's elaborate taste. The Keatons bounced from rental home to rental home until Buster finally built the couple a spacious ranch house in Beverly Hills. However, Natalie wouldn't settle for anything less than a mansion, and she outright refused to move into the new home.

Keaton immediately sold the ranch house, and, in 1925, bought several sprawling acres in Beverly Hills. He and architect Gene Verge, Sr., then began designing a spacious Mediterranean-style palazzo that was the last word in movie-star luxury. The Italian Villa, as Buster simply called it, had a sunken swimming pool (visitors got to it by descending a 60-step staircase), outdoor gardens, three tennis courts, an aviary, a playhouse, and a mechanical trout stream that could be turned on-and-off at the push of a button.

The inside was even more lavish. There was a black-and-white marble floor for the tango, a large fireplace, murals, living quarters for six servants and a master suite for Natalie that consisted of a pale green bedroom and a pink bathroom with gold-leaf fixtures (Natalie also had a specially designed toilet to suit her petite frame). Buster lived in simpler quarters in another part of the house, but he did treat himself to a luxurious screening room and a small outbuilding/cutting room where he would edit his movies. Pamela Mason, who lived in the house after the Keatons, described it this way to Keaton biographer Marion Meade: the decor "was very ornate, very grand, and everything you think he isn't. It was a spectacular dream house."

The Italian Villa cost about $300,000. This would be a deal in today's real estate market, but it was tremendously expensive compared to Keaton's earnings at that time period, according to Meade. In fact, Keaton always liked to joke that "it took a lot of pratfalls to build this dump."

Even so, Keaton enjoyed entertaining at the Italian Villa, often making his signature grilled lamb chops for visitors on the outdoor barbecue. Keaton showed off his palatial estate to the fan magazines, and he even featured the Italian Villa in his early talkie Parlor, Bedroom and Bath (the film doesn't have a copyright so you can watch it below).

Sadly, the Keatons divorced in 1932. The Italian Villa went to Natalie, but she eventually sold it to cover debts. The mansion then changed hands several  times -- both Cary Grant and Marlene Dietrich lived there -- until James Mason and his first wife, Pamela, bought the estate in 1949 (the Masons divorced in 1964 although Pamela continued to live at the Italian Villa until her death).

The Masons, who had two young children and a menagerie of cats, made several alterations to the house. They sold off most of the estate land, took down several chandeliers, and covered up the tile with cork flooring. The Masons used Buster's old cutting room for a tool shed; one day, they were rummaging around in the shed when they were shocked to find several original prints of Keaton's old films crammed into a safe.

Initially, Mason refused to give Keaton the prints to the films even when Buster showed up at the front door of the Italian Villa to retrieve them. Mason did not believe the now down-on-his-luck comedian had the money or ability to properly restore the films (Keaton later referred to this incident as a "crowning indignity"). Mason donated the prints to the Academy of Motion Pictures Arts and Sciences for restoration, but Keaton, with the help of film collector Raymond Rohauer, was eventually able to get them back.

After Pamela Mason's death in 1996, the Italian Villa was sold by the Mason children and underwent a complete restoration. You can read about the restoration here and view a photo gallery here.