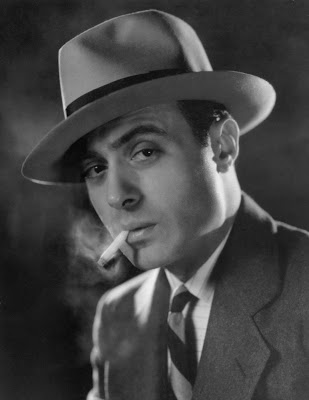 Today, I'm writing about the best films of French actor Charles Boyer as chosen by classic movie fans on Twitter.

TCM is celebrating the career of French actor Charles Boyer by airing his films each Thursday in January. During his lifetime, Boyer's Gallic charm made him one of cinema's great lovers, but today he is probably best remembered for his role in Gaslight (1944) as the master manipulator who literally tries to scare Ingrid Bergman out of her fortune.

Recently, I asked classic film fans on Twitter about their favorite Charles Boyer movies, and I got an interesting range of responses (here's the link to my original Tweet). I thought it would be nice to share the selections with my blog readers. There's an alphabetical list of the films mentioned and where you can watch them at the bottom of the article.

We'll start out with my favorite Boyer film, the 1939 romance Love Affair. This film has been remade and re-interpreted several times, but the original still remains the best, with great chemistry between Irene Dunne and Boyer, and Boyer's exceptional performance as Michel Marnet, a self-loathing playboy who finds redemption in love.

@FocksyMcFoxFace and @jenTCM agreed with me on Love Affair, but @jenTCM also named The Constant Nymph (1943), in which Joan Fontaine plays composer Boyer's muse, as her second choice. @RockwellAbigail named French director Max Ophuls' masterpiece The Earrings of Madame de. . .(1953) as her favorite Boyer film, but added "[t]he Boyer/Dunne is the only Love Affair."

Gaslight was chosen as No. 1 by @MartiCardinal and @MichaelEddy6, while @renzocapetti29 and @timbuktu246 both mentioned Algiers (1938), another favorite of mine. Boyer plays jewel thief Pepe Le Moko, who is hiding out in the Casbah district of the North African capital. @renzocapetti29 summed up the film well: "[I]t's a little thin here & there but then haunting sad truthful between the caring characters."

@FrankMalfitano recommended the classic romance Hold Back the Dawn, which features an impressive Olivia de Havilland performance, while @NeilBonnabel gave a thumbs up to Boyer's fun role as one of Jean Harlow's amours in the pre-code comedy Red Headed Woman (1932). I haven't seen the rom-com Barefoot in the Park (1967) in so long that I forgot Boyer was in it, but two Tweeters heartily recommended it. "I thought he was great in Barefoot in the Park as the eccentric neighbor. Interesting to see him in light comedy," wrote @redemptive_grit. "Boyer and Mildred Natwick are so good together, a perfect balance to [Jane] Fonda and [Robert] Redford," opined @jeff_lyn.

As always, the great folks on Twitter recommended some Boyer films that are new to me. My fellow Classic Movie Blog Association member Patrician Nolan-Hall, aka @CaftanWoman, recommended the family film The Happy Time, in which Boyer plays the loving patriarch of a French-Canadian family (go here to read Paddy's wonderful review). Luckily for me, this one is airing on TCM on Jan. 18. Another new one to me is the romance History Is Made at Night (1937), which was recommended by both @NeilBonnabel and @SugarLafever. I have never seen this movie, but since it is about a Titanic-like ocean liner and costars the wonderful Jean Arthur, I'm going to check it out soon.