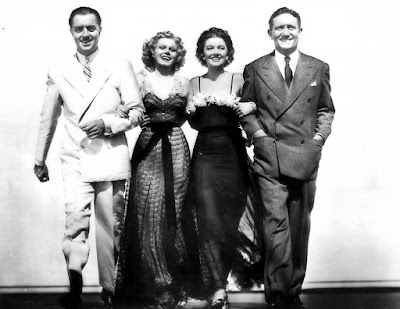 This article is part of The Bill & Myrna New Year's Blogathon! hosted by Phyllis Loves Classic Movies and The Flapper Dame.

Myrna Loy and William Powell are one of old Hollywood's great onscreen couples. They were joined by the dynamic duo of Jean Harlow and Spencer Tracy for the 1936 film Libeled Lady, which is one of the great examples of the screwball comedy genre. In this artice, I'll outline Libeled Lady's screwball bona fides, but first here's the plot information and a little background.

Libeled Lady begins when New York Evening Star editor Warren Haggerty (Tracy) is called into the office on his wedding day. It seems that the paper has printed a potentially libelous story about wealthy socialite Connie Allenbury (Loy), and she is threatening to sue the paper for $5 million. Desperate to avoid a lawsuit that could  ruin the Evening Star, Warren cooks up a wild scheme that involves professional fixer Bill Chandler (Powell) courting Connie while entering into a sham marriage to Warren's increasingly exasperated fiancee, Gladys (Harlow). However, things go awry when both Connie and Gladys fall in love with Bill. 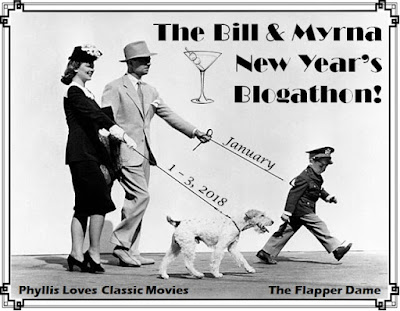 Libeled Lady was originally designed by MGM as a vehicle for the popular team of Loy and Powell, but they also needed a new movie for Harlow, who was the studio's most popular box-office draw. Harlow, who didn't relish playing another dim blonde, lobbied for the part of Connie, but she was persuaded to play Gladys because it allowed her to have a wedding scene with Powell, whom she was dating off-screen. Studio chief Louis B. Mayer couldn't resist adding Tracy to the cast in order to make Libeled Lady another one of MGM's all-star spectaculars.

Viewed today, Libeled Lady is a breezy screwball from start to finish with the accomplished cast tossing off one-liners, performing difficult physical comedy bits, and looking impossibly glamorous in the art-deco sets and chic thirties couture. Below, you'll find four hallmarks of screwball comedy that can be found in Libeled Lady. 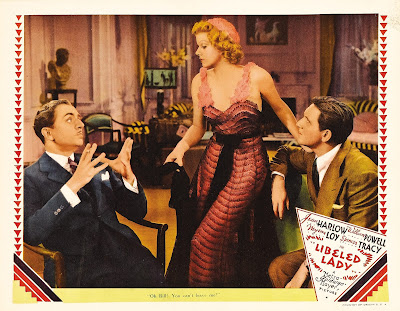 In his Scorsese Screens column for TCM, director Martin Scorsese pointed out that screwballs have much in common with the comedies of William Shakespeare such as As You Like It, Twelfth Night, and A Midsummer Night's Dream. These plays all involve certain plot elements that are included in most screwballs; for example, Shakespeare's plots often involve a character assuming a false identity, which Bill does in Libeled Lady (in reality, he's a broke ex-newspaper reporter, but, for the benefit of Connie and her father, he pretends to be a wealthy author and expert fisherman).
Libeled Lady also puts a Production Code-approved spin on the time-honored Shakespearean plot of partner swapping with Bill married to Gladys and courting Connie at the same time (the movie goes to great pains to emphasize that Powell's character is a honorable gentleman despite the fact that he is married to two women at the same time). 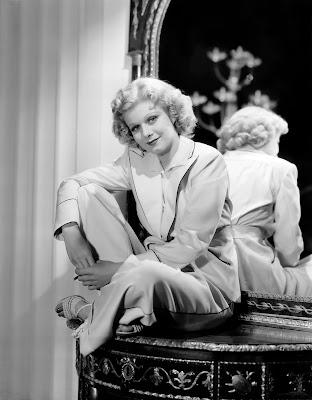 Many screwball comedies depend on clever one-liners delivered in a rat-a-tat style, and Libeled Lady is no exception. There's a lot of witty repartee between Warren and the newspaper staff, and Powell is given a lot of great lines that show his breezy way with dialogue. However, the best bon mots belong to Harlow, who fires off one-liners with brassy aplomb.

Screwballs often combined witty repartee with broad physical comedy. Most of Libeled Lady's slapstick comes from Powell, who is vastly underrated as a physical comedian. He is exceptional in set pieces such as a mock fistfight with Tracy (gif above) and a fishing scene, but it is in the small bits of business where he really shines. Powell is one of the few actors who could do mundane tasks like shaving or answering the phone in a funny way. 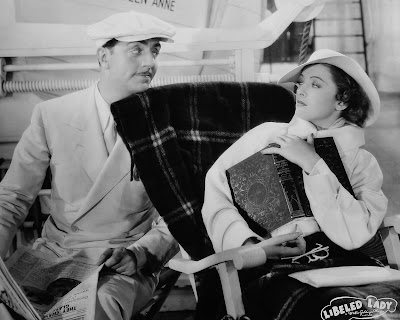 Thirties audiences were looking for an escape from the harsh realities of everyday life when they went to their local movie theaters, and old Hollywood studios were more than happy to provide heaping helpings of glamorous escapism. With a few notable exceptions (It Happened One Night, Sullivan's Travels), screwballs almost exclusively took place in an alternate world of glamour and luxury where the Great Depression and the rise of Nazi Germany did not appear (Libeled Lady does have one brief and very funny joke about the rising unrest in Europe). Instead, those who went to see Libeled Lady were treated to a glamorous world of luxury liners, designer fashions, and exclusive parties for the rich and famous.


Libeled Lady will air at noon Jan. 27 on TCM. It's also available on DVD and video on demand.