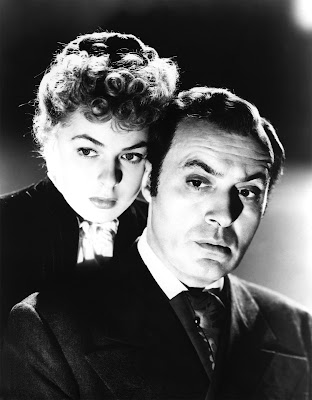 Gaslight (1944) is airing this Thursday night on TCM. The psychological thriller features star of the month Charles Boyer and Ingrid Bergman.

TCM Essentials: San Francisco cop Steve McQueen goes rogue after a witness (Pat Renella) he was assigned to protect is killed by the mob in Bullitt  (1968) at 8 p.m. Saturday.

Silent Sunday Nights: Naval cadet Ramon Novarro embarks on a transpacific flight for the love of Anita Page in The Flying Fleet (1929) at midnight.

Best Day to DVR: Tuesday daytime. The lineup of costume dramas features some great films. Start out your morning with Greta Garbo as writer Leo Tolstoy's tragic heroine in Anna Karenina (1935) at 9:30 a.m. followed by Errol Flynn giving a sly, self-knowing performance in the swashbuckler The Adventures of Don Juan (1948) at 11:15 a.m. The next two films show the great range of Laurence Olivier: He plays the uptight Mr Darcy in Pride and Prejudice (1940) at 1:15 p.m. and the passionate Heathcliff in Wuthering Heights (1939) at 3:30 p.m. Finally, The Lion in Winter (1968) at 5:30 p.m. outlines the dysfunctional family dynamics of the English royal family in the 12th century. 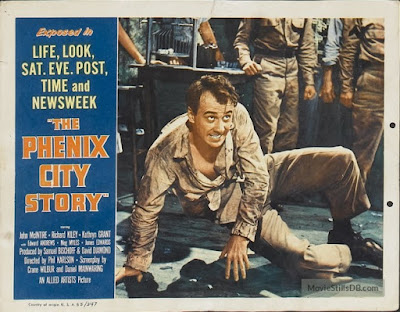 Three daytime picks: A lineup of films starring the character actor David Wayne, who was a familiar presence in old Hollywood films of the forties and fifties. He plays the next door neighbor/songwriter (he's the one who warbles "Farewell, Amanda") in the Katharine Hepburn/Spencer Tracy vehicle Adam's Rib (1949) at 6 a.m. Wayne got a rare leading role as a child killer in the remake of M (1951) at 9:30 a.m., while he plays carefree bachelor Frank Sinatra's married buddy in the rom-com The Tender Trap (1955) at 11:15 a.m. Wayne plays a cynical TV producer who gets a scoop on a dedicated doctor to the poor (Paul Muni) in The Last Angry Man (1959) at 4:15 p.m.
Prime time lineup: The prime time lineup features true crime movies starting with Robert Blake and Scott Wilson as two troubled young men who butcher a rural Kansas family in In Cold Blood (1967) at 8 p.m. 10 Rillington Place (1970) at 10:30 p.m. tells the story of an English serial killer (Richard Attenborough) who frames a mentally challenged man (John Hurt).
Late night pick: Dog Day Afternoon (1975) at 2:30 a.m. is one of director Sidney Lumet's best, but it's also worth staying up late for the underrated noir The Phenix City Story (1955) at 4:45 a.m., which tells the story of corruption is a small Alabama town.

Three daytime picks: See the Best Day to DVR section.
Prime time lineup: A night of films starring June Havoc. Havoc began her career as a child star (she and her older sister Louise were the inspirations for the musical Gypsy), but after getting her big break on Broadway in Pal Joey, she went to Hollywood where she appeared in all kinds of movies, including the comedy Brewster's Millions (1945) at 8 p.m. (Havoc plays a showgirl who turns the head of would-be rich guy Dennis O'Keefe). Havoc and Cesar Romero are partners in love and larceny in the noir Once Upon a Thief (1950) at 9:30 p.m.

Late night pick: Havoc plays a nightclub singer in the backstage musical Four Jacks and a Jill (1942) at 12:45 a.m.

Three Daytime Picks: A day of movies starring Yul Brynner, starting with the Russian-born actor as a Communist officer who helps Deborah Kerr escape Hungary in The Journey (1959) at 8:15 a.m. Brynner plays Dmitri in the 1958 adaptation of Fyodor Dostoevsky's novel The Brothers Karamazov at 2 p.m. Finally, Brynner is the robotic gunslinger in the original version of Westworld (1973) at 4:30 p.m.
Prime time lineup: A night of biopics about world leaders featuring Ben Kingsley's Academy Award-winning performance as Indian activist Gandhi (1982) at 8 p.m.
Late Night Pick: Sunrise at Campobello (1960) at 11:30 p.m. follows the struggles of future president Franklin Roosevelt (Ralph Bellamy) and future first lady Eleanor Roosevelt (Greer Garson) after his diagnosis with polio. There's no shortage of biopics about British prime minister Winston Churchill these days, but director Richard Attenborough covered his early life in the biopic Young Winston (1972) at 2:15 a.m., which stars Simon Ward.

Prime time lineup: TCM is airing movies from star of the month Charles Boyer every Thursday in December. Boyer plays a charming man with cruel intentions in the two movies airing tonight. In Gaslight (1944) at 8 p.m., Boyer plays a master manipulator who marries a disturbed woman (Ingrid Bergman) for her fortune (if you've ever read the term gaslighting on the Internet, it's based on Boyer's behavior in this movie). In Hold Back the Dawn (1941) at 10:15 p.m., he is a suave ladies man who marries spinster Olivia de Havilland in order to emigrate to the U.S.
Late night pick:  The weepie Back Street (1941) at 12:30 a.m. finds Boyer and Margaret Sullavan in a tangled love affair. Boyer is in another love triangle this time with Rita Hayworth and Thomas Mitchell (!) in the anthology film Tales of Manhattan (1942) at 2:15 a.m. Finally, Boyer plays a self-absorbed composer who runs roughshod over delicate wallflower Joan Fontaine in The Constant Nymph (1943) at 4:30 a.m.

Three daytime picks: The Boyer movies continue with the charming comedy Together Again (1944) at 6:30 a.m., which finds the French actor as a sculptor who is hired by widow Irene Dunne to make a statue of her late husband. The rest of the day is devoted to a birthday tribute to actor Luise Rainer, who was born Jan. 12, 1910, in Dusseldorf, Germany. Rainer was one of MGM's brightest stars of the mid-1930s winning two Oscars for The Great Ziegfeld (1936) at 2 p.m. and The Good Earth (1937) at 5:15 p.m. Also worth watching is the biopic The Great Waltz (1938) at 10 a.m. It's prime MGM schmaltz, but Rainer gives a moving performance as the wife of composer Johann Strauss.
Prime time lineup: TCM is airing survival movies each Friday night in January. Tonight's lineup involves people alone in the wild starting with Richard Harris as a 19th-century trapper left for dead in Man in the Wilderness (1971) at 8 p.m. (this movie has the same basic plot as the 2015 Leonardo DiCaprio film, The Revenant). Adulterous wife Rhonda Fleming leaves husband Robert Ryan to die in the desert in Inferno (1953) at 10 p.m.
Late night pick: Daniel O'Herlihy plays the shipwrecked Englishman in one of the many movie versions of Robinson Crusoe (1954) at 11:45 p.m. followed by the TCM premiere of director Sean Penn's  Into the Wild (2007) at 1:30 a.m. about a young man's disappearance into the Alaska wilderness.

This week's The Essentials pick is the police procedural Bullitt (1968) at 8 p.m. followed by two more films about witness protection: Cop Charles McGraw tries to get a gangster's widow to trial in The Narrow Margin (1952) at 10:15 p.m. while police detective Henry Morgan investigates a brutal gambling syndicate in Murder Inc. (1960) at midnight.

Two movies starring Gene Tierney, starting with romantic comedy about a widow who moves into a haunted house in The Ghost and Mrs. Muir (1947) at 8 p.m. Tierney plays a department store clerk turned con artist who tries to swindle naive millionaire Henry Fonda in the screwball Rings on Her Fingers (1942) at 10 p.m.