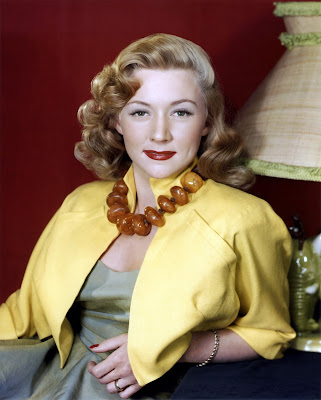 TCM is featuring two films starring Gloria Grahame (above) on Sunday. The actor is being portrayed by Annette Bening in the new movie, Film Stars Don't Die in Liverpool (2017).

TCM is airing two films from actor Gloria Grahame on Sunday night. Grahame and her career are in the spotlight right now because of the new movie Film Stars Don't Die in Liverpool starring Annette Bening. There's also a night of movies honoring the one-of-a-kind comedian W. C. Fields and several films featuring star of the month Charles Boyer.

Noir Alley: George Raft searches for the clue to his brother's death in a hotel room Bible in the low-budget noir Red Light (1949) at 10 a.m. This is one of the few films that references the Bibles placed in American hotel rooms by the evangelical association Gideon's International.

Best Day to DVR: Sunday prime time and late night. Actor Gloria Grahame is back in the spotlight thanks to the new movie Film Stars Don't Die in Liverpool, which stars Annette Bening as the actress during a period in her life when she falls in love with a young Englishman (Jamie Bell). Grahame certainly led a tumultuous life, but she deserves to be remembered for her onscreen work. Bening and TCM host Eddie Muller are hosting an evening dedicated to Grahame that includes the film noir In a Lonely Place (1950) at 8 p.m., in which she plays a vulnerable woman who gets mixed up with down-on-his-luck writer Humphrey Bogart. Grahame won an Academy Award for playing the naive wife of a Hollywood screenwriter (Dick Powell) in The Bad and the Beautiful (1952) at 10 p.m.

Three daytime picks: Ring in 2018 with a great lineup of classic movies. Charles Laughton plays a proper English butler who moves to the wild West in the gentle comedy Ruggles of Red Gap (1935) at 6:45 a.m. There's two great rom-coms in the midday lineup: Cary Grant and Rosalind Russell play battling exes in the great screwball His Girl Friday (1940) at 1 p.m., while handsome reporter William Holden gives Judy Holliday a civics lesson in Born Yesterday (1950) at 2:45 p.m. Clifton Webb and Myrna Loy raise a large brood in the family film Cheaper by the Dozen (1950) at 6:30 p.m.
Prime time lineup: The prime time lineup features stylish caper movies starting with Cary Grant protecting Audrey Hepburn from a rogue's gallery of con men in Charade (1963) at 8 p.m. Michael Caine and Shirley MacLaine try to steal a priceless antiquity in Gambit (1966) at 10:15 p.m.
Late night pick: Gregory Peck gets mixed up with international espionage and Sophia Loren in Arabesque (1966) at 12:15 a.m.

Three daytime picks: The theme is biopics starting with Mata Hari (1932) at 6:15 a.m., which stars Greta Garbo in a heavily fictionalized movie about World War I's most notorious spy. Next, Jean Simmons recreates the early years of Elizabeth I in Young Bess (1953) at 1:30 p.m. The interesting film Bridge to the Sun (1961) tells the true story of Gwen Terasaki (Carroll Baker), an American woman who married a Japanese diplomat (James Shigeta) just before the outbreak of World War II.
Prime time lineup: A night of films starring the great comedian W.C. Fields. Fields, who was a star in the Ziegfeld Follies on Broadway, got his big break playing the pompous president of the fictional Klopstokia in the Olympic-themed comedy Million Dollar Legs (1932) at 8 p.m. Fields perfected his unique comic persona of henpecked husband/pompous blowhard in It's a Gift (1934) at 9:15 p.m. Fields' best film is probably The Bank Dick (1940) at 10:45 p.m.

Late night pick: The surrealist comedy Never Give a Sucker an Even Break (1941) at 12:15 a.m. was Fields final film. Fields proved his acting chops by playing the ne'er-do-well Mr. Micawber in MGM's adaptation of David Copperfield (1935) at 2:45 a.m.

Three Daytime Picks: A day of movie monsters starting with two fifties sci-fi classics: The Thing from Another World (1951) at 6 a.m. and Them! (1954) at 7:30 a.m. The original Godzilla (1954) is airing at 10:45 a.m. The afternoon lineup features one of old Hollywood's best sci-fi movies Forbidden Planet (1956) at 6:15 p.m. Forbidden Planet's semi-sequel The Invisible Boy (1957) is airing before the first film at 4:45 p.m.
Prime time lineup: A night of films restored by the Hollywood Foreign Press Association. The HFPA is best known for hosting the annual Golden Globes awards each January, but the group also works to preserve and restore classic cinema. Movies restored by the HFPA include the unusual pacifist film The Boy With Green Hair (1948) at 8 p.m. and the spaghetti Western, A Fistful of Dollars (1964) at 9:30 p.m.
Late Night Pick: Another film restored by the HFPA is Indian director Satyajit Ray's coming of age story Pather Panchali (1955) at 11:30 p.m.

Three daytime picks: A lineup of films about love triangles starting with sisters Bette Davis and Olivia de Havilland competing for the affections of George Brent in the John Huston-directed soaper In This Our Life (1942) at 6 a.m. The pre-code romance Smilin' Through (1932) at 10:45 a.m. is one of old Hollywood's great schmaltzfests; the plot is a little difficult to explain but it involves Leslie Howard, Fredric March, and a (sort-of) reincarnated Norma Shearer. Deception (1946) at 6 p.m. finds a jealous Claude Rains exacting his revenge on an ex-lover (Davis again) and her new husband (Paul Henreid).

Prime time lineup: TCM is airing movies from star of the month Charles Boyer every Thursday in December. Boyer was one of the great romantic screen idols of the 1930s and 1940s. TCM is airing two of his best romances in prime time: Love Affair (1939) at 8 p.m., which costars Irene Dunne and All This, and Heaven Too (1940) at 9:45 p.m., which costars Bette Davis.
Late night pick: Boyer's breakthrough role was playing the male lead in the French film Liliom (1934) at 12:30 a.m. (the play this movie was based on was later turned into the Rodgers and Hammerstein musical, Carousel). Liliom led to an invitation to Hollywood where he made films like Conquest (1937) at 2:45 a.m. in which he played Napoleon Bonaparte. Boyer became an international superstar after playing jewel thief Pepe Le Moko in Algiers (1938) at 4:45 p.m. 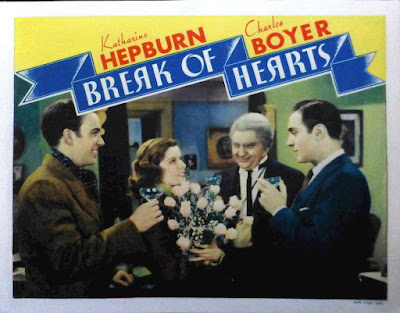 Three daytime picks: The Boyer movies continue with the underrated romance costarring Katharine Hepburn, Break of Hearts (1935) at 6:45 a.m. The afternoon lineup is devoted to movies from director A. Edward Sutherland, including the Laurel and Hardy comedy, Flying Deuces (1939) at 10:45 a.m. Sutherland directed the comedy-mystery Having Wonderful Crime (1945) at 6:45 p.m., which finds amateur detectives Pat O'Brien, Carole Landis, and George Murphy on the hunt for a missing magician (George Zucco).
Prime time lineup: TCM is airing survival movies each Friday night in January. Tonight's lineup involves hunting trips that go very, very wrong. Cornel Wilde starred in and directed the The Naked Prey (1966) at 8 p.m. in which he plays an African safari guide who ends up being the hunted one. Jon Voight, Burt Reynolds, and company take a long. strange hunting trip in the Georgia backwoods in Deliverance (1972) at 10 p.m.
Late night pick: Big-game hunter Count Zaroff (Leslie Banks) indulges in the ultimate hunting expedition in the pre-code horror film The Most Dangerous Game (1932) at midnight. TCM is also airing the 1956 remake Run for the Sun at 1:15 a.m., which has Trevor Howard taking over the villainous duties.

This week's The Essentials pick is the science fiction film 2001: A Space Odyssey (1968) at 8 p.m. followed by two more films starring Keir Dullea: The psychological drama David and Lisa (1962) at 10:45 p.m. Dullea plays a juvenile delinquent who is helped by an unconventional minister (Don Murray) in The Hoodlum Priest (1961) at 12:30 a.m.

For the prime time lineup, see the Best Day to DVR section.