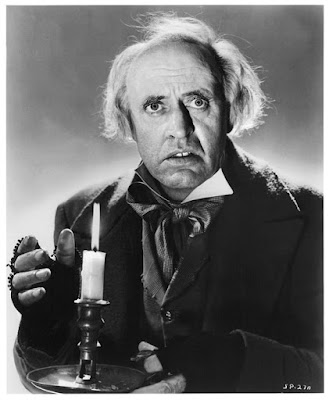 A Christmas Carol (1951) starring Alastair Sim is one of the holiday classics airing on TCM this week.

TCM is starting out December with a weekend filled with holiday classics, including two versions of A Christmas Carol. There's also a great lineup of boxing movies, and two days of films from star of the month Lana Turner.

Noir Alley: Desperate fishing boat captain John Garfield begins carrying illegal immigrants to make some quick cash in The Breaking Point (1950) at 10 a.m. Sunday. This is the second screen version of Ernest Hemingway's novella To Have and Have Not. A 1944 film starred Humphrey Bogart and Lauren Bacall.

TCM Imports: Two films about scientists starting with Soviet director Mikhail Romm's drama about the effects of radiation on a young scientist (Aleksey Batalov) in Nine Days in One Year (1962) at 2 a.m. Ingrid Bergman plays the anguished wife of a German scientist (Mathias Wieman) who is blackmailed for her affair with a younger man (Kurt Kreuger) in director Roberto Rossellini's Fear (1954) at 4 a.m. .

Christmas movies: Love Finds Andy Hardy is airing at 10 pm. Tuesday.  Friday evening has a full lineup of holiday movies and there are Christmas classics airing on Saturday and Sunday afternoons. See each day's entry for more details.

Best Day to DVR: Monday prime time, and late night. TCM is airing a lineup of stellar films about boxing starting with the film version of Rod Serling's 1956 teleplay Requiem for a Heavyweight (1962) at 8 p.m. Watch for a young Muhammad Ali in the ring with star Anthony Quinn. Next is director John Huston's noir Fat City (1972) at 9:45 p.m., which is about two broken-down boxers (Stacy Keach and Jeff Bridges) who live on skid row in Stockton, Calif. The wonderful biopic of boxer Rocky Graziano (Paul Newman) Somebody Up There Likes Me (1956) is on at 11:30 p.m., followed by William Holden as a sensitive young man who trades his violin for boxing gloves in Golden Boy (1939) at 1:45 a.m. Finally, Humphrey Bogart's last film, The Harder They Fall (1956) at 3:30 a.m. is about a cynical sportswriter who uncovers the dirty side of boxing.

Three daytime picks: The theme is movies about prison starting with Paul Muni's brutal experiences in the Southern prison system in the pre-code drama I Am a Fugitive from a Chain Gang (1932) at 8:15 a.m. Eleanor Parker has a tough time in lockup in the women's prison drama Caged (1950) at 12:30 p.m. while Burt Lancaster and company try to break out of the big house in Brute Force (1947) at 6:15 p.m.
Prime time lineup: See the Best Day to DVR section.
Late night pick: See the Best Day to DVR section.

Three daytime picks: A birthday tribute to director Fritz Lang who was born Friedrich Lang on Dec. 5, 1890, in Vienna. Lang made some of the greatest German films ever made such as the crime drama M (1931) at 6 a.m. before emigrating to America (Lang was a devout Roman Catholic, but his mother was Jewish) where he worked for MGM for a time, making movies like the powerful drama about lynching Fury (1936) at 10:15 a.m. Lang's dark and moody style, perfectly suited films noir. He made several noirs, including While the City Sleeps (1956) at 6:15 p.m. about the hunt for a serial killer.
Prime time lineup: TCM will be airing movies from star of the month Lana Turner every Tuesday in December. This week's lineup features Turner's early roles. Her breakthrough part was a small role in the Warner Bros. crime drama They Won't Forget (1937) at 8 p.m. as a pretty high school student who is murdered in a small Southern town (Turner got the nickname "the sweater girl" for this role). Turner eventually earned a contract with MGM where she was cast in wholesome teen roles in films like Love Finds Andy Hardy (1938) at 10 p.m.


Three Daytime Picks: Lana Turner's early roles continue with a small part in the rather odd costume drama The Adventures of Marco Polo (1938) at 8:45 a.m. (Gary Cooper of all people plays the title role). Turner has a great part in Calling Dr. Kildare (1939) at 1:45 p.m. as a gangster's sister who catches the good doctor's eye. The afternoon lineup is a double feature of Ernest Borgnine movies, including his Academy Award-winning role as a schlubby butcher looking for love in Marty (1955) at 6 p.m.
Prime time lineup: The lineup celebrates the career of producer Alan Ladd, Jr., who worked on such legendary films as Star Wars (1977), Alien (1979), and Blade Runner (1982). The lineup begins with the documentary It's Always About the Story: Conversations with Alan Ladd, Jr., (2016) at 8 p.m. The Right Stuff (1983) at 9 p.m., about the early days of the American space program, was produced by Ladd's production company.
Late night pick: The Oscar winner Chariots of Fire (1981) at 12:30 a.m. was also coproduced by The Ladd Company.

Three daytime picks: The daytime theme is movies set in the desert starting with James Cagney and Bette Davis as a pilot and heiress who are stranded in the Southwest in the screwball comedy, The Bride Came C.O.D. (1941) at 6 a.m. Next, Errol Flynn, Kay Francis, and Ian Hunter endure a  love triangle in the Sahara Desert in the romance Another Dawn (1937) at 2 p.m. Finally, ancient Egyptian Boris Karloff rises from his centuries old tomb to search for his true love in modern Cairo in The Mummy (1932) at 6:30 p.m.

Prime time lineup: TCM is putting the spotlight on The Great American Songbook each Thursday in  December. Host Michael Feinstein will bring his wealth of knowledge about America's mid-20th century popular music, which is such a wonderful part of many old Hollywood films. The prime time lineup features two biopics about songwriters starting with Tom Drake and Mickey Rooney playing composers Richard Rodgers and Lorenz Hart in Words and Music (1948) at 8 p.m. I'll See You in My Dreams (1951) at 10:15 p.m. is about lyricist Gus Kahn (Danny Kaye) and his wife Grace (Doris Day).
Late night pick: The Busby Berkeley backstager Hollywood Hotel (1937) at 2:15 a.m. introduced "Hooray for Hollywood."

Three daytime picks: The theme is movies about Nazi collaborators starting with crippled former POW Robert Ryan tracking down a prison camp informer (Van Heflin) in the noir Act of Violence (1949) at 6:15 a.m. Next, everybody, including the Nazi occupiers, come to Rick's Cafe Amercain in Casablanca (1942) at 11:45 a.m. Finally, James Stewart and Margaret Sullavan play a young German couple who are trying to flee the Third Reich in The Mortal Storm (1940) at 3 p.m.
Prime time lineup: TCM is airing Christmas movies each Friday night in December. The prime time lineup features two versions of Charles Dickens' classic story A Christmas Carol starting with the 1951 version starring Alastair Sim at 8 p.m. Another British movie, Scrooge (1935) at 9:45 p.m., has Seymour Hicks in the title role.
Late night pick: The late night lineup has two great holiday noirs. Private detective Phillip Marlowe (Robert Montgomery) searches for a missing woman during the holidays in Lady in the Lake (1947) at 11:15 a.m. The Deanna Durbin murder-mystery Lady on a Train (1945) at 1:15 a.m. features the songbird warbling "Silent Night." The Christmas crime movies continue with wily "butler" Dick Van Dyke planning to rob Gimbel's department store on Christmas Eve in Fitzwilly (1967) at 3 a.m., while gangster Edward G. Robinson and company plan to knock over a bank on Christmas Eve in Larceny, Inc. (1942) at 4:45 a.m.

There's two Christmas movies airing on Saturday afternoon. Director John Ford's Western 3 Godfathers (1949) at noon is an unusual retelling of the Nativity story. It's followed by the classic comedy It Happened on 5th Avenue (1947) at 2 p.m.
This week's The Essentials film is the romantic comedy Woman of the Year (1942) at 8 p.m. followed by two more films starring Fay Bainter: The costume drama Jezebel (1938) at 10 p.m. and the fantasy The Secret Life of Walter Mitty (1947) at midnight.

The Sunday afternoon lineup features the Janet Leigh-Robert Mitchum rom-com Holiday Affair (1949) at noon followed by the family musical Meet Me in St. Louis (1944) at 1:45 p.m.
The prime time lineup is all about movies about encounters with aliens. First up is director Steven Spielberg's classic Close Encounters with the Third Kind (1977) at 8 p.m. followed by the fifties science-fiction film It Came from Outer Space (1953) at 10:30 p.m.