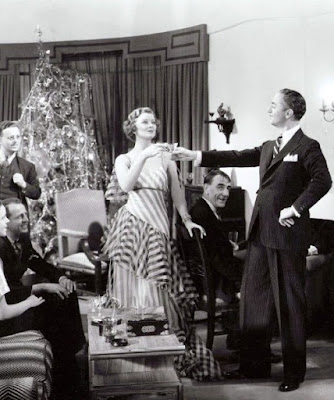 It wouldn't be New Year's Eve without The Thin Man series on TCM. The network is airing six of the films starring Myrna Loy and William Powell starting at 8 p.m. Sunday.

TCM is airing all six of The Thin Man movies on New Year's Eve. There's also a marathon of Alfred Hitchcock's best films and two days of films from star of the month Lana Turner.

Noir Alley: Not airing this week.

TCM Essentials: Frank Sinatra plays an army officer who begins having strange dreams about his service in the Korean War in The Manchurian Candidate (1962)  at 8 p.m. Saturday.

Three daytime picks: A lineup of Christmas movies starting with the modern retelling of the Nativity story Star in the Night (1945) at 6 a.m. Next, Gary Cooper plays a hobo turned media sensation in the politically charged Christmas movie Meet John Doe (1941) at 6:45 a.m. Stan Laurel and Oliver Hardy play bumbling toy makers in Babes in Toyland (1934) at 9 a.m., followed by Scrooge (1935) at 10:30 a.m. with Seymour Hicks playing Charles' Dickens legendary miser. America's favorite teenager (Mickey Rooney) mulls which girl to take to the Christmas Eve dance (his choices are Judy Garland, Ann Rutherford, and Lana Turner) in Love Finds Andy Hardy (1938) at noon. Dick Van Dyke plays a butler who plans a Christmas heist in Fitzwilly (1967) at 2 p.m., while singleton Debbie Reynolds causes a scandal by adopting a baby during the holidays in Bundle of Joy (1956) at 4 p.m. Finally, the touching romance The Shop Around the Corner (1940) at 6 p.m. is one of the great Christmas movies.
Prime time lineup: The prime time lineup features two favorites from director Alfred Hitchcock: Rear Window (1954) at 8 p.m. and North by Northwest (1959) at 10 p.m.
Late night pick: The Hitch films airing in late night are Dial M for Murder (1954) at 12:30 a.m., The Birds (1963) at 2:30 a.m., and Vertigo (1958) at 4:45 a.m. 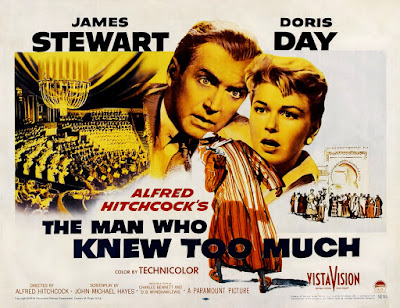 Three daytime picks: You can spend Boxing Day with Hitchcock starting with two black and white masterpieces: Shadow of a Doubt (1943) at 7 a.m. and Strangers on a Train (1951) at 9 a.m. Next, is one of Hitchcock's loveliest color movies, the dark comedy The Trouble with Harry (1955) at 11 a.m., followed by two interesting late Hitchcock movies, Topaz (1969) at 1 p.m. and Marnie (1964) at 3:15 p.m. You can round out your Hitchcock marathon with the remake of The Man Who Knew Too Much (1956) at 5:45 p.m.
Prime time lineup: TCM will be airing movies from star of the month Lana Turner every Tuesday in December. This week's lineup features Turner's later movies starting with her rags to riches (and back to rags again) role in the soaper Madame X (1966) at 6 p.m. The noir Portrait in Black (1960) at 10 p.m., which stars Turner and Anthony Quinn as an adulterous couple, has a few similarities with Turner's best film, The Postman Always Rings Twice.

Late night pick: Bob Hope (of all people) plays a bachelor who sets hearts aflutter (including Turner's) in a suburban community in the rom-com Bachelor in Paradise (1961) at 12:15 a.m.


Three Daytime Picks: The Turner movies continue with the actress and John Wayne sailing in the ocean blue in the spy thriller The Sea Chase (1955) at 7:30 a.m. Turner was unexpectedly good in Diane (1956) at 1:45 p.m. about a 16th century mistress to the king of France. The afternoon lineup has a double-bill of feline-themed horror films from producer Val Lewton: The Leopard Man (1943) at 5:30 p.m. and Cat People (1942) at 6:45 p.m.
Prime time lineup: A night of films starring the irrepresible actor Zero Mostel, who is probably best-known today for starring on Broadway in Fiddler on the Roof and playing pushy showman Max Bialystock in writer and director Mel Brooks' The Producers (1967) at 8 p.m. Mostel plays a blacklisted actor in The Front (1976) at 9:45 p.m.
Late Night Pick: Mostel plays a poor New York City tailor who has a heavenly visitor (Harry Belafonte) in The Angel Levine (1970) at 11:30 p.m.

Three daytime picks: A lineup of films starring Henry Fonda starting with his role as the patriarch of a Wyoming clan in Spencer's Mountain (1963) at 8:30 a.m. Fonda and Cliff Robertson play two Presidential candidates who are caught up in a tough race in the political drama The Best Man (1964) at 10:45 a.m. Fonda and his great friend James Stewart star in the Western Firecreek (1968) at 6 p.m.

Prime time lineup: TCM is putting the spotlight on The Great American Songbook each Thursday in  December. Host Michael Feinstein will bring his wealth of knowledge about America's mid-20th century popular music, which is such a wonderful part of many old Hollywood films. The prime time lineup starts with the biopic The Dolly Sisters (1945) at 8 p.m. about two Hungarian siblings (Betty Grable and June Havoc) who become vaudeville sensations at the turn of the century. The nostalgic score includes "Carolina in the Morning" and "The Sidewalks of New York." Annie Get Your Gun (1950) at 10:15 p.m. has a great Irving Berlin score that includes the standard "There's No Business Like Show Business."
Late night pick: Late night features two of the greatest musicals ever made: On the Town (1949) at 12:15 a.m. and The Band Wagon (1953) at 2 a.m.

Three daytime picks: A lineup of films with scores from legendary composer Max Steiner. In his later career, Steiner wrote the score for several Westerns including the heavily fictionalized biopic The Adventures of Mark Twain (1944) at 8 a.m. Two of Steiner's great scores are in the swashbuckler The Adventures of Robin Hood (1938) at 10:30 a.m. and the noir Mildred Pierce (1945) at 6 p.m.
Prime time lineup: TCM is airing its annual In Memoriam tribute to those in the film industry who died in 2017. (FYI: this list doesn't include those who have already received special programming in their honor, such as actor/director Jerry Lewis and TCM host Robert Osborne). French actor Jeanne Moreau, who died July 31, was best-known for her new wave films like director Francois Truffaut's Jules et Jim (1962) at 8 p.m. Bill Paxton, who died Feb. 25, was a welcome presence in many nineties films like Apollo 13 (1995) at 10 p.m.
Late night pick: Mary Tyler Moore, who died Jan. 25, was a TV legend, but she also made films like the musical Thoroughly Modern Millie (1967) at 12:30 a.m. Director George Romero, who died July 16, kicked off the current zombie craze with his low-budget horror classic Night of the Living Dead (1968) at 3:15 a.m.

TCM is airing films with New Year's Eve themes in the daytime. The romantic comedies Bachelor Mother (1939) at 8:30 a.m. and Holiday (1938) at 11:15 a.m. both have memorable New Year's Eve scenes, while the Rat Pack tries to rob five Las Vegas casinos on New Year's Eve in the original Ocean's Eleven (1960) at 3:15 p.m.
For the prime time lineup, see the Best Day to DVR section.