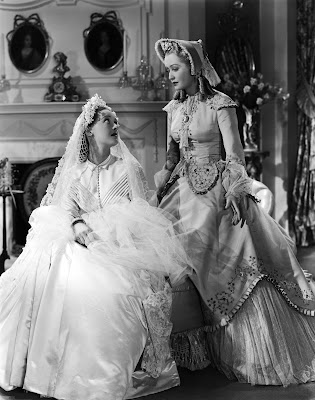 This article is part of The Duo Double Feature Blogathon hosted by The Flapper Dame and Phyllis Loves Classic Movies. This blogathon is all about classic movie stars who appeared in two films together.

The old Hollywood feud getting all of the attention these days is Bette Davis vs. Joan Crawford, but, before those two legends  battled it out, Davis famously fought with costar Miriam Hopkins. The two leading ladies' onscreen and off-screen battles on the sets of The Old Maid (1939) and Old Acquaintance (1943) earned them a lot of coverage in gossip columns, but, more importantly, the Davis/Hopkins spats enlivened two of the finest woman's pictures ever made in Old Hollywood. Below, I'll give all of the details about this squabbling duo's double feature and where you can watch the films, but first here's a little background.

Davis and Hopkins relationship began long before they arrived in Hollywood (Note: Most of the accounts I was able to find are from Davis' perspective; Hopkins mostly dismissed the feuding stories as gossip to sell movie tickets). The pair first met while working in summer stock, and they were like oil and water from the very beginning of their acquaintance with the more established Hopkins lording her star status over awkward newcomer Davis. Things didn't improve when the two ladies made it to Hollywood in the early 1930s, where Davis struggled to get parts while Hopkins became a top star in films Dr. Jekyll and Mr. Hyde (1931) and Design for Living (1933). 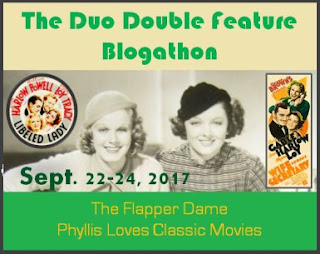 However, after a bravura performance in Of Human Bondage (1934) and an unexpected Academy Award for Dangerous (1935), Davis became the hottest actress on the Warner Bros. lot. She used her newfound star status to nab the showy role of spoiled Southern belle Julie Marsden in Jezebel (1938); the film had originally been intended as a vehicle for Hopkins, who originated the role on Broadway. When Davis won her second best actress Oscar in a row for Jezebel, it was widely reported that Hopkins was both furious and inconsolable, but that didn't stop studio chief Jack Warner from casting the pair in a different Civil War era melodrama. 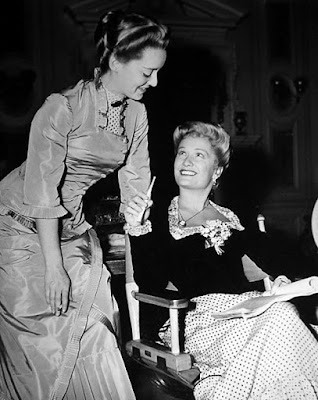 The Old Maid, which is based on a Pulitzer Prize winning play by Zoe Akins, tells the story of two cousins, Charlotte (Davis) and Delia Lovell (Hopkins), who are rivals for the affections of Union soldier Clem Spender (George Brent). However, when Delia jilts Clem for a rich man (James Stephenson), he drowns his sorrows with Charlotte, who ends up an unwed mother and dependent on Delia when Clem dies in battle.

Tensions between the two actresses began even before the first day of filming. Davis was annoyed that director Edmund Goulding wouldn't let her play both Charlotte and Delia, and Hopkins, who was going through a bitter divorce from director Anatole Litvak, suspected Davis of having an affair with her soon-to-be ex-husband (sources differ as to the accuracy of Hopkins' suspicions).

Things didn't get any better once filming began as Davis recounted in her autobiography. "Miriam is a perfectly charming woman socially," she wrote. "Working with her was another story." Hopkins  irritated Davis by reportedly staring off into space during filming ("her restless little spirit was impatiently awaiting her next line," Davis acidly recounted), and having herself made up in a much more flattering way than Davis. Both characters were required to age about 25 years in the story, and while Davis actually looks much older than her fifty-something character, Hopkins retains the dewy glow of youth throughout the movie.

Ironically, the on-set tension probably helped the movie. Both Davis and Hopkins give emotionally honest performances as two women who are bound by blood, friendship, and their love for Clem. Hopkins is excellent as a basically decent woman whose love of money and prestige causes her to make two terrible, life-altering decisions, while Davis abandons her usual fiery theatrics for a restrained performance as a woman whose conceals her great capacity for love under an emotionally cruel exterior. At 2:15 p.m. Nov. 7 on TCM. DVD and video on demand. 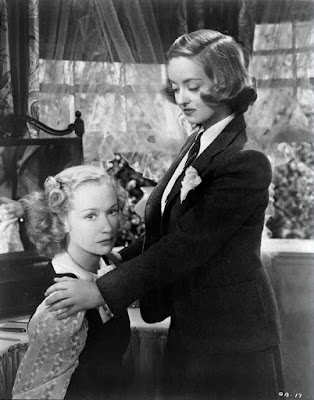 Old Acquaintance, which is based on a play by John Van Druten, tells the story of writers and lifelong friends Kit Marlowe (Davis) and Millie Drake (Hopkins). The film charts the ups-and-downs of their tempestuous relationship beginning in the 1920s when Kit is a literary sensation and Millie is a bored, pregnant housewife who scribbles out romance novels in her spare time. The film then follows the characters up to World War II where Kit is a celebrated literary type with a younger boyfriend (Gig Young) while Millie is a best-selling author with a troublesome grown daughter (Dolores Moran).

Davis agreed to play Kit with the understanding that her friend Mary Astor would play the part of Millie, but Warner's executives changed their minds and cast Hopkins at the last minute mostly because they thought revived discussion about the Davis/Hopkins feud would help the box office receipts. Davis was furious, and, at first, refused to show up for work until her agent coaxed her onto the set by showing the dailies of Hopkins' scene-stealing performance.

However, things didn't get any better once Davis arrived. Hopkins, who appears to have refined passive aggression to a fine art, feigned hearing loss when Davis tried to talk to her, put props in front of Davis' face before shooting scenes, and, refused to cooperate during the movie's climactic confrontation scene when a frustrated Kit is supposed to literally shake some sense into a hysterical Millie (clip above). According to legend, half of the Warner's lot turned out to watch the Davis/Hopkins confrontation, but, even then, Hopkins subtly sabotaged take after take by letting her body go completely limp until an exasperated Davis finally walked off the set (director Vincent Sherman spliced together several takes to get an acceptable scene).

In truth, all of the on-set drama has overshadowed one of the finest of the forties "woman's pictures," a type of female-centric film that flourished during and after World War II (think Now, Voyager, Mildred Pierce, and the fifties films of Douglas Sirk). Millie and Kit are the only three-dimensional characters in Old Acquaintance with their concerns, their loves, and even their careers as the driving forces of the plot; in comparison, both Millie's alcoholic husband (John Loder) and Kit's on-the-make boyfriend are milquetoast characters. Old Acquaintance has one of old Hollywood's most surprising endings with both Millie and Kit abandoning romantic aspirations in favor of continuing their lifelong friendship. At 6 p.m. Oct. 22 on TCM. DVD and video on demand.