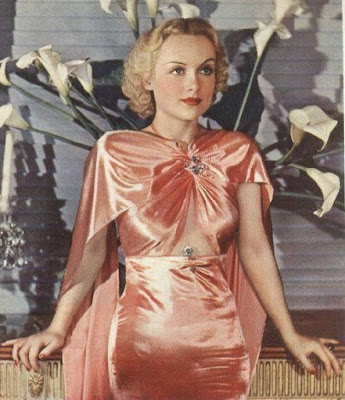 
I'll go in-depth a little further down in the article, but first here's a quick rundown of what else is on the schedule.

Noir Alley: Washed-up screenwriter Humphrey Bogart gets mixed up with a murder investigation and Gloria Grahame in In a Lonely Place (1950) at 10 a.m. Sunday. This film from director Nicholas Ray is one of the great noirs. If you haven't seen it be sure to set your DVR.

TCM Essentials: The backstage musical The Band Wagon (1953) at 8 p.m. Saturday features Fred Astaire as a former movie star who is trying to make a comeback on Broadway.

Best Day to DVR: Thursday daytime: TCM has a daytime lineup of great movies about lost love that includes a mini-Greer Garson tribute. First up is the Irish beauty's Academy Award-winning performance as an ordinary British housewife who loses her beloved daughter-in-law (Teresa Wright) in the Blitz in Mrs Miniver (1942) at 6 a.m. followed by Garson's star-making role as the beloved wife of schoolteacher Robert Donat in Goodbye, Mr. Chips (1939) at 8:15 a.m. Next, music hall singer Garson saves World War I amnesiac Ronald Colman in the all-time great weepie Random Harvest (1942) at 10:15 a.m. Peter Lawford pines for June Allyson amidst the Civil War in the 1949 version of Little Women (1949) at 12:30 p.m. (this movie isn't quite as good as the Katharine Hepburn film, but it's still a fine entertainment) while Omar Sharif pines for Julie Christie amidst the Russian Revolution in Doctor Zhivago (1965) at 2:45 p.m. Finally, Humphrey Bogart and Ingrid Bergman embark on old Hollywood's greatest star-crossed romance in Casablanca (1943) at 6:15 p.m.

Three daytime picks: The theme is movies starrring Jimmy Durante starting with one of the three thirties movies he made with Buster Keaton, Speak Easily (1932) at 6 a.m. In this one, Keaton is a professor who falls in with a dancing troupe run by Durante. Strictly Dynamite (1934) at 11:30 a.m. finds Durante as a radio comic who turns to poet Norman Foster for new material. Doris Day fights to save dad Durante's circus in Billy Rose's Jumbo (1962) at 5:45 p.m..
Prime time lineup:  Film critic and historian Leonard Maltin is unearthing more treasures from the Disney vault in Monday prime time. Tonight's lineup is devoted to swashbucklers starting with the live-action Disney favorite Swiss Family Robinson (1960) at 8 p.m. Robinson hearthrob James MacArthur gets Kidnapped (1960) at 10:30 p.m. in Disney's adaptation of the Robert Louis Stevenson swashbuckler.
Late night pick: Supernatural pirate Peter Ustinov haunts Dean Jones and Suzanne Pleshette in Blackbeard's Ghost (1968) at 12:30 a.m.

Three daytime picks:  The morning theme is love triangles starting with Swedish immigrant Betty Compson caught between fiance Conrad Nagel and charmer Robert Ames in the pre-code drama Three Who Loved (1931) at 9:15 a.m. The afternoon theme is movies about raising children starting with Spencer Tracy and Loretta Young living in shantytown and raising a baby in the bittersweet  romance, A Man's Castle (1933) at 11:45 a.m. Impoverished New England widow Kay Francis struggles to raise her four children in My Bill (1938) at 5:30 p.m.
Prime time lineup: TCM will air movies from leading lady Jennifer Jones every Tuesday in September. This week's lineup kicks off with her portrayal of a mysterious woman who inspires a painter (Joseph Cotten) in Portrait of Jennie (1948) at 8 p.m. This is one of the most beautiful and haunting films to come out of the old Hollywood studio system, so tune in or set your DVR. Jones plays a Cuban woman who gets involved with revolutionary John Garfield in the John Huston-directed film We Were Strangers (1949) at 9:45 p.m.

Three Daytime Picks:  The theme is movies about police officers starting with motorcycle cop Ralph Meeker trying to avenge the death of his partner (Jeff Richards) in Code Two (1953) at 7:15 a.m. Next, tough police officer Edward G. Robinson goes undercover to break up the mob in the classic gangster film Bullets or Ballots (1936) at 2:15 p.m. Finally, lady police officer Claire Trevor goes up against wily drug smuggler Raymond Burr in the fascinating noir Borderline (1950) at 3:45 p.m. Fred MacMurray is also great in this one as her love interest/federal agent.
Prime time:Tonight's lineup is devoted to movies featuring actors and crew members who now reside in the Motion Picture & Television Country House and Hospital in Los Angeles. First up is the documentary Harold and Lillian: A Hollywood Love Story (2014) at 8 p.m. This film is about married couple Lillian Michelson and Harold Michelson whose film research and production design appeared in films from directors Alfred Hitchcock, Steven Spielberg, and Stanley Kubrick. Next MPH resident Mark Rydell will introduce the James Caan/Marsha Mason romance Cinderella Liberty (1973) at 10 p.m., which he directed.
Late night pick: MPH resident Judy Woodbury appeared as an extra in My Fair Lady (1964) which is airing at 12:15 a.m. 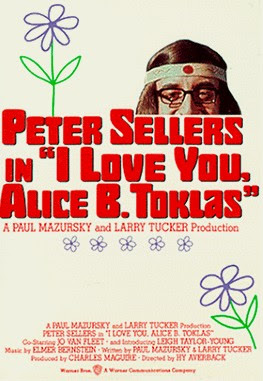 Three daytime picks: See the "Best Day to DVR" section.
Prime time lineup: Tonight's lineup features movies about the counterculture of the 1960s and 1970s. First, straight-laced lawyer turned hippie Peter Sellers looks for the meaning of life in the comedy I Love You, Alice B. Toklas (1968) at 8 p.m. A blind man (Edward Albert) living in seventies San Francisco fall for a beautiful hippie (Goldie Hawn) in Butterflies Are Free (1972) at 9:45 p.m.
Late night pick: Italian director Michelangelo Antonioni takes on the unrest on university campuses in the 1970s in Zabriskie Point (1970) at 1:30 a.m.

Three daytime picks: The daytime lineup is about British royalty starting with the King Arthur (Richard Harris) musical Camelot (1967) at 10:15 a.m. Next Errol Flynn and his band of merry men fight the dastardly Prince John (Claude Rains) in The Adventures of Robin Hood (1938) at 1:30 p.m. Finally, the children of the Four Musketeers (Cornel Wilde, Maureen O'Hara, Dan O'Herlihy, and Alan Hale, Jr.) fight for Queen Anne (Gladys Cooper) in the fun swashbuckler At Sword's Point (1951) at 5 p.m.
Prime time lineup: The theme is movies starring screwball queen Carole Lombard starting with her best outing with frequent co-star Fred MacMurray, Hands Across the Table (1935) at 8 p.m. (she's a fortune-hunting manicurist; he's a fortune-hunting playboy). Cesar Romero and Preston Foster battle for Lombard's affections in Love Before Breakfast (1936) at 9:30 p.m.
Late night: Lombard does a killer Greta Garbo impersonation in the screwball/mystery The Princess Comes Across (1936) at 11 p.m. and she is in top form as a small-town Vermont woman who fakes radium poisoning so she can live it up in New York City in Nothing Sacred (1937) at 4:45 a.m.

The Essentials series continues at 8 p.m. with new host Alec Baldwin. He will be joined by director William Friedkin to discuss the musical The Band Wagon (1953) at 8 p.m. followed by two more backstage films: Twiggy goes from chorus girl to star in The Boy Friend (1971) at 10:15 p.m., and Joan Crawford goes from burlesque dancer to star in  Dancing Lady (1933) at 12:45 a.m.

TCM's prime time lineup is all about director George Stevens' epic Giant (1956) starting with the film itself at 8 p.m. The documentary Return to Giant (2003) at 11:30 p.m. is about the making of the film.