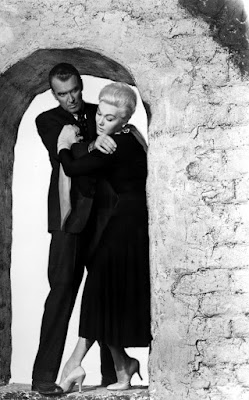 Vertigo (1958) is one of the Alfred Hitchcock-directed films airing on TCM this week. The thriller stars James Stewart and Kim Novak in a dark take of obsession.

Every Wednesday and Friday in July, TCM is airing a marathon of movies from English director Alfred Hitchcock (there's an indepth guide below). There's also a daytime lineup of horror movies and an evening of films from star of the month Ronald Colman.

Noir Alley: Murderer Lawrence Tierney marries innocent Audrey Long, but finds himself attracted to her divorced sister (Claire Trevor) in Born to Kill (1947) at 10 a.m. Sunday. This film is the first noir from noted director and editor Robert Wise.

TCM Essentials: Tony Curtis and Jack Lemmon play musicians on the run who join a female jazz band in Some Like It Hot (1959) at 8 p.m. Saturday.

TCM Imports: Two more films from Ozu. First, Ineko Arima and Setsuko Hara meet the mother (Isuzu Yamada) who abandoned them as children in Tokyo Twilight (1957) at 2 a.m. followed by Record of a Tenement Gentleman (1947) at 4:30 a.m. about the residents of a Tokyo slum.

Best Day to DVR: The Wednesday night Hitchcock lineup is well worth recording, but TCM also has a daytime lineup of great James Stewart Westerns on Monday. Start out with three of his collaborations with director Anthony Mann: Winchester '73 (1950) at 8:45 a.m., Bend of the River (1952) at 10:30 a.m., and The Far Country (1955) at 12:15 p.m. Next Stewart, John Wayne and director John Ford team up for the elegiac Western The Man Who Shot Liberty Valance (1962) at 2 p.m. Finally, Stewart plays a Civil War-era father who is trying to find his lost son in Shenandoah (1965) at 4:15 p.m.

50 Years of Hitchcock Wednesday: TCM is giving viewers an unprecedented opportunity to watch more than 40 films from the master of suspense throughout July. Since there's so much worth watching I'll add two special sections this month. Wednesday's lineup features four of Hitchcock's most iconic films
The lineup: Dark love story Vertigo (1958) at 8 p.m.; Spy thriller North by Northwest (1959) at 10:30 p.m.; Serial killer flick Psycho (1960) at 1 a.m. and avian horror film The Birds (1963) at 3 a.m.
Must watch: Arguably, Hitchcock's three best films are on tonight. Vertigo is often cited by critics as the best film ever made, while North by Northwest is Hitchcock's slickest crowd pleaser. The shower scene in Psycho remains the defining moment in Hitchcock's vast filmography; it is the work of a master artist who has complete control over his medium.
Also worth your time: The Birds isn't at quite the same level as the other three films on tonight, but it's still a great entertainment with the most unexpected horror villains in cinema history.
Underrated gem: None.
Dud:  None.

50 Years of Hitchcock Friday: Tonight features five of Hitchcock's later films.
Lineup:  Psychological drama Marnie (1964) at 8 p.m.; Cold War thriller Torn Curtain (1966) at 10:30 p.m.; spy saga Topaz (1969) at 1 a.m.; serial killer story Frenzy (1972) at 3:30 a.m., and murder mystery Family Plot (1976) at 5:30 a.m.
Must-sees: Although in many ways it is a  bizarre film, this psychological study of a beautiful kleptomaniac (Tippi Hedren) is Hitchcock's last great film.
Also worth your time: Stars Paul Newman and Julie Andrews are both wildly miscast -- they are not plausible as a couple and they aren't plausible as leads for a  Hitchcock film -- but I actually enjoy this one more than most old Hollywood fans.
Underrated gem: Topaz, a spy thriller that deals with the Cuban Missile Crisis, is the best Hitchcock film you've never heard of. There are good performances all around, an intriguing plot of international espionage, and great location shooting in Copenhagen and Paris.
Dud: Honestly, I don't like the graphic nudity, profanity, and violence in either Frenzy or Family Plot.

Three daytime picks:  The morning theme is a birthday tribute to Walter Brennan who was born July 25, 1894, in Lynn, Mass. He was one of old Hollywood's most beloved and honored character actors -- he won three best supporting actor Academy Awards --who often worked with top directors like William Wellman on the gentle family film Goodbye, My Lady (1956) at 8:45 a.m. The rest of the day is devoted to films from actress Lili Damita. She is best known today as the first wife of leading man Errol Flynn, but Damita carved out quite a successful career of her own in thirties Hollywood. The pre-code drama Friends and Lovers (1931) at 10:45 a.m., is about an unscrupulous couple (Damita and Erich von Stroheim) who use her charms to blackmail Adolphe Menjou and a very young Laurence Olivier. Damita has a small role in the James Cagney-swashbuckler The Frisco Kid (1935) at 4:15 p.m.
Prime time lineup: Tonight's lineup is devoted to movies about fifties car culture. Most of these films like Hot Rod (1950) at 8 p.m., which stars James Lydon as a rebellious teen who soups up a 1932 roadster, were marketed to teenagers. In Hot Rod Gang (1958) at 9:30 p.m., John Ashley takes the juvenile delinquency one step further by indulging in both rock 'n' roll and drag racing.

Late night pick:  The Ghost of Dragstrip Hollow (1959) at 11 p.m. is a fun Scooby Doo-like horror comedy about a group of hot-rodders who stumble on a haunted house.

Three Daytime Picks:  The theme is horror movies starting with Agnes Moorehead as a mystery writer turned amateur detective who must unmask the identity of a demented killer called The Bat (1959) at 8 a.m. Next up are two eerie classics from producer Val Lewton about a feline shape shifter (Simone Simon): Cat People (1942) at 1 p.m. and The Curse of the Cat People (1944) at 4:15 p.m.
Prime time: See the "50 Years of Hitchcock Wednesday" section.
Late night pick: See the "50 Years of Hitchcock Wednesday" section.

Three daytime picks: A birthday tribute to actor Donald Crisp who was born July 27, 1884, in London. Crisp had a long career as one of old Hollywood's most reliable character actors. First up is the comedy What Every Woman Knows (1934) at 6:30 a.m. in which Crisp plays the brother of a woman (Helen Hayes) who is the brains behind her politician husband (Brian Aherne). The fun comedy Brother Orchid (1940) at 11:30 a.m. finds gangster Edward G. Robinson hiding out at Brother Superior Crisp's monastery. Finally, Crisp plays a powerful rancher in the Western Saddle in the Wind (1958) at 6:30 p.m. This film is notable for having a screenplay written by Twilight Zone creator Rod Serling.
Prime time lineup: TCM's July star of the month is leading man Ronald Colman. Tonight's lineup features some of his best films of the 1940s starting with his Oscar-winning role in A Double Life (1947) at 8 p.m. as an actor playing Othello who comes to identify almost completely with his character. Next, Colman plays a wounded and shell-shocked World War I soldier who is rehabilitated by singer Greer Garson in Random Harvest (1942) at 10 p.m.
Late night pick: Both law professor Colman and fugitive Cary Grant romance their landlady (Jean Arthur) in the rom-com The Talk of the Town (1942) at 12:15 a.m. while Colman plays the patriarch of a stuffy Boston family in The Late George Apley (1947) at 2:30 a.m.

The Essentials series continues at 8 p.m. with new host Alec Baldwin. He will be joined by his former 30 Rock costar Tina Fey to discuss the gender-bending comedy Some Like It Hot (1959) at 8 p.m. followed by two more films starring Tony Curtis: The actor teams up with frequent co-star Burt Lancaster for the circus drama Trapeze (1956) at 10:15 p.m. while he and Sidney Poitier play two escaped convicts from a Southern chain gang in The Defiant Ones (1958) at 12:15 a.m.

TCM's prime time lineup is all about movies featuring society affairs starting with director Martin Scorsese's adaptation of Edith Wharton's novel about New York City society in the Gilded Age, The Age of Innocence (1993) at 8 p.m. Next Jeanne Crain, Madeleine Carroll, and George Sanders star in The Fan (1949) at 10:30 p.m., which is an adaptation of an Oscar Wilde play of social climbing in Victorian England.