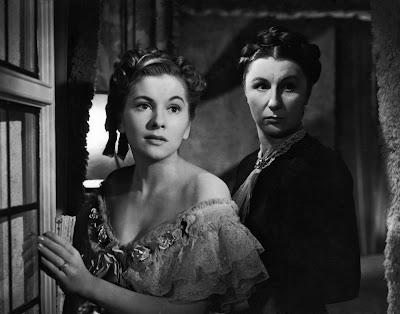 Rebecca (1940) is one of the Alfred Hitchcock-directed movies airing on TCM this week. It stars Joan Fontaine (left) as a newlywed who is tormented by the devoted servant (Judith Anderson) of her husband's first wife.

Every Wednesday and Friday in July, TCM is airing a marathon of movies from English director Alfred Hitchcock (there's an indepth guide below). There's also a lineup of movies adapted from the works of William Shakespeare and an evening of films from star of the month Ronald Colman.

Noir Alley: Peggy Cummins and John Dall play a couple who unleash their fascination with weapons in a Bonnie and Clyde-esque crime spree in Gun Crazy (1949) at 10 a.m. Sunday.

TCM Essentials: Sportswriter Spencer Tracy and foreign affairs columnist Katharine Hepburn meet cute and then try to make their marriage of opposites work in the romantic comedy Woman of the Year (1942) at 8 p.m. Saturday.

Silent Sunday Nights: Two Harold Lloyd shorts starting at midnight. In Hot Water (1924), Lloyd plays a henpecked husband who tries to survive life with his wife (Jobyna Ralston) and mother-in-law (Josephine Crowell). In A Sailor-Made Man, rich boy Lloyd joins the Navy to prove his worth to the family of his sweetheart (Mildred Davis).

TCM Imports: Chinese director King Hu's martial arts epic A Touch of Zen (1971) at 2:15 a.m. Sunday night/Monday morning follows the adventures of a painter (Shih Chun) and female fugitive (Yang Hui-zhen) in 17th century China. Don't let the terrible title or the fact that this is a martial arts movie put you off. It is simply one of the great films of the 20th century and a breakthrough in Chinese cinema.

Best Day to DVR: Tuesday late night. The theme is movies adapted from William Shakespeare starting with Japanese master Akira Kurosawa's Throne of Blood (1957) at 1 a.m., which masterfully transforms Macbeth into a samurai epic. Next, Orson Welles brilliantly deconstructs Shakespeare's English history plays in Chimes at Midnight (1965) at 3:15 a.m. followed by Elizabeth Taylor and Richard Burton in an all-out battle of the sexes in The Taming of the Shrew (1967) at 5:30 a.m. Finally, wind up your bardolatry with Laurence Olivier's Academy Award-winning version of Hamlet (1948) at 7:45 a.m. Wednesday morning.

50 Years of Hitchcock Wednesday: TCM is giving viewers an unprecedented opportunity to watch more than 40 films from the master of suspense throughout July. Since there's so much worth watching I'll add two special sections this month. Wednesday's lineup features the first five films Hitchcock made in Hollywood.
The lineup: Daphne du Maurier adaptation Rebecca (1940) at 8 p.m.; spy drama Foreign Correspondent (1940) at 10:30 p.m.; screwball comedy Mr. & Mrs. Smith (1941) at 12:45 a.m.; marriage melodrama Suspicion (1941) at 2:30 a.m., and World War II thriller Saboteur (1942) at 2:15 a.m.
Must watch: Rebecca and Suspicion. Hitchcock's two films with actor Joan Fontaine perfectly encapsulate the female Gothic melodramas that were quite popular in forties Hollywood.
Also worth your time:  Hitchcock's other 1940 film, Foreign Correspondent -- it often gets overlooked  because of Rebecca's large shadow -- has a deft plot, great cast (Joel McCrea, Laraine Day, Herbert Marshall AND George Sanders), and some great Hitchcock set pieces (a rainy assassination scene; a windmill chase scene). Also, Saboteur is an intriguing World War II spy thriller with an absolutely fantastic scene set inside the Statue of Liberty
Underrated gem: If you didn't think Hitchcock could do a pure comedy, then watch Mr. & Mrs. Smith. He gets great performances from screwball favorites Carole Lombard and Robert Montgomery as a couple who come to find out that their marriage isn't valid.
Dud:  None tonight.

50 Years of Hitchcock Friday: Tonight features five of Hitchcock's mid-forties offerings.
Lineup:  Murder in the family drama Shadow of a Doubt (1942) at 8 p.m.; seafaring saga Lifeboat (1944) at 10 p.m.; psychological drama Spellbound (1945) at midnight; Nazis in Argentina thriller Notorious (1946) at 2:15 a.m., and courtroom drama The Paradine Case (1948) at 4:15 a.m.
Must-sees: Hitchcock's three best films of the forties are on tonight. Shadow of a Doubt expertly mines the hypocrisy in small-town American life, while Hitch pulls off the difficult hat trick of filming a suspense film in small spaces in Lifeboat. However, TCM is saving the best for last with the Cary Grant-Ingrid Bergman romance Notorious.
Also worth your time: Spellbound is an innovative exploration of Hitch's fascination with psychiatry anchored by a great Bergman performance.
Underrated gem: None tonight.
Dud: Despite big name stars and Hitch at the helm, The Paradine Case is a densely plotted, overly talky mess that star Gregory Peck often referred to as the worst film he ever made.

Three daytime picks: A birthday tribute to John Gilbert who was born John Pringle July 10, 1897, in Logan, Utah. Gilbert was one of the leading matinee idols of silent films, especially opposite frequent co-star and rumored off-screen love, Greta Garbo (they steam up the screen in A Woman of Affairs (1928) at 7:45 a.m. and Flesh and the Devil (1926) at 6 p.m.). Also airing are the great World War I film The Big Parade (1925) at 10:45 a.m. and the talkie Downstairs (1932) at 3 p.m. in which Gilbert plays a murderous chauffeur.
Prime time lineup:  TCM is airing a night of movies featuring mid-century modern, which is the sleek, monochromatic style of design and architecture that was popular in the 1950s and 1960s (think Mad Men and architect Frank Lloyd Wright). Playboy William Holden brings virtuous Maggie McNamara to his mid-century modern apartment in The Moon Is Blue (1953) at 8 p.m. The Best of Everything (1959) at 10 p.m. is a sort of female-centric Mad Men about three secretaries (Hope Lange, Suzy Parker, and Diane Baker) who are trying to make it in the New York publishing industry (their boss is none other than Joan Crawford).
Late night pick: The most famous mid-century modern house in the movies is probably James Mason's South Dakota hideaway in the Hitchcock thriller North by Northwest (1959) at 3:30 a.m.

Three daytime picks:  The theme is movies starring Doris Day starting with the two musicals she and Gordon MacRae made about turn-of-the-century life in small-town Indiana, By the Light of the Silvery Moon (1953) at 6 a.m. and On Moonlight Bay (1951) at 10 a.m. Next, Day is sensational in the Ruth Etting biopic Love Me or Leave Me (1955) at 1:45 p.m. You can wrap up the afternoon with the fun musical comedy My Dream Is Yours (1949) at 6 p.m., which co-stars Jack Carson as a talent scout who gives radio singer Day her big break.
Prime time lineup: Tonight's lineup is devoted to movie adaptations of William Shakespeare starting with the Romeo and Juliet redux West Side Story (1961) at 8 p.m. Next is the Kenneth Branagh-directed version of Much Ado About Nothing (1993) at 10:45 p.m., which features appearances from nineties stars like Denzel Washington, Michael Keaton, and Keanu Reeves (yes, that Keanu Reeves, although, in fairness, he's not terrible). 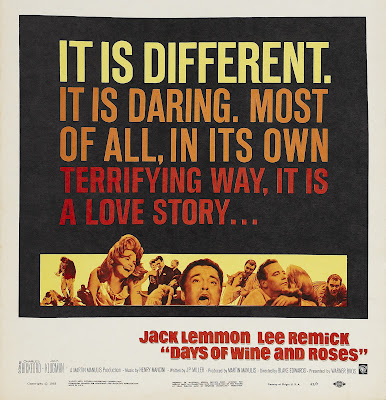 Three daytime picks: The theme is movies about alcoholism starting with Down East minister Seth Parker (Phillips Lord) taking in a boy (Frankie Darro) who was abandoned by his alcoholic father in Way Back Home (1932) at 10:30 a.m. Too Much, Too Soon (1958) at 1:30 p.m. is an interesting biopic about the rocky relationship between alcoholic actor John Barrymore (played by Errol Flynn in a fascinating performance) and his daughter, Diana Barrymore (Dorothy Malone). Boozing couple Jack Lemmon and Lee Remick try to dry out in Days of Wine and Roses (1962) at 3:45 p.m.
Prime time: See the "50 Years of Hitchcock Wednesday" section.
Late night pick: See the "50 Years of Hitchcock Wednesday" section.

Three daytime picks: There's a lineup of horror films starting with Peter Lorre as a doctor whose hand transplant of a concert pianist (Colin Clive) goes very, very wrong (helpful hint: don't reuse the limbs of a notorious murderer) in Mad Love (1935) at 6:15 a.m. The afternoon lineup has two great Val Lewton-produced movies. First, Kim Hunter almost becomes The Seventh Victim (1943) of a band of satanists at 10 a.m. followed by a mysterious killer stalking the New Mexico desert in The Leopard Man (1943) at 3:45 p.m.
Prime time lineup: TCM's July star of the month is leading man Ronald Colman. Tonight's lineup features some of his best movies of the late 1930s starting with the actor leading a group of plane crash victims to Shangri-La in Lost Horizon (1937) at 8 p.m. followed by the rollicking costume drama If I Were King (1938) at 10:30 p.m., which stars Colman as a poet who gets caught up in the intrigue at the royal court in Medieval France.
Late night pick: Both the Colman-Ida Lupino melodrama The Light That Failed (1939) at 2:15 a.m. and the caper movie The Man Who Broke the Bank at Monte Carlo (1935) at 4 a.m. are well worth staying up late for.

Three daytime picks: The morning theme is movies directed by Vincente Minnelli, including  the soaper The Cobweb (1955) at 8 a.m. about the lives and loves of the patients and staff at a psychiatric clinic, and Home from the Hill (1958) at 10:45 a.m. about a Southern landowner's (Robert Mitchum) conflicts with his wife (Eleanor Parker) and two sons (George Hamilton and George Peppard). The afternoon lineup is devoted to movies directed by Fred Zinnemann including the entertaining B movie Kid Glove Killer (1942) at 4:45 p.m. which stars Van Heflin as a nerdy scientist who solves a politician's murder.
Prime time lineup: See the "50 Years of Hitchcock Friday" section.
Late night: See the "50 Years of Hitchcock Friday" section.

The Essentials series continues at 8 p.m. with new host Alec Baldwin. He will be joined by his former 30 Rock costar Tina Fey to discuss the Spencer Tracy-Katharine Hepburn romantic comedy Woman of the Year (1942) at 8 p.m. followed by two more films about real-life romances that started on movie sets: Humphrey Bogart and Lauren Bacall began their legendary love affair while filming the noir To Have and Have Not (1944) at 10:15 p.m. and sparks flew between Steve McQueen and Ali McGraw while making The Getaway (1972) at 12:15 a.m.

TCM's prime time lineup is all about movies  adapted from the novels of Western writer Jack Schaefer. First up is director George Stevens' legendary version of Shane (1953) at 8 p.m. followed by the fun B Western The Silver Whip (1953) at 10:15 p.m., which is an adaptation of Schaefer's novel First Blood.