1001 Classic Movies: The Night of the Hunter 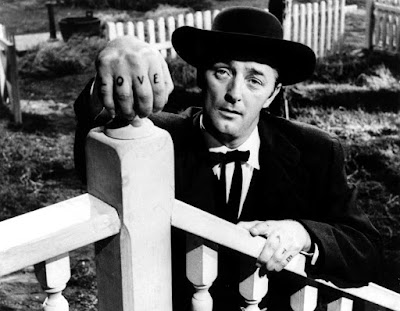 The Night of the Hunter (1955) is one of the 1001 classic movies you should see. It stars Robert Mitchum as a preacher/ex-convict who is after $10,000 in stolen money.

Each week, I'm going to recommend a classic movie you should see (for the reasons behind the 1001 series and reviews of earlier films covered go here). This month I'm celebrating Robert Mitchum's centenary -- the iconic actor was born Aug. 6, 1917, in Bridgeport, Conn. -- by looking at four of his films. This week's selection is the film noir The Night of the Hunter (1955).

The Night of the Hunter tells the story of serial killer and sometime preacher Harry Powell (Mitchum), who, after getting picked up for stealing a car, lands in a West Virginia jail cell with condemned bank robber and killer Ben Harper (Peter Graves). Before he is executed, Harper accidentally lets it slip that his two young children (Billy Chapin and Sally Jane Bruce) may know where the stolen loot is hidden, so a newly paroled Powell makes a beeline to Harper's small Ohio River hometown where he uses his charm and outwardly pious manner to marry Harper's impressionable widow (Shelley Winters). 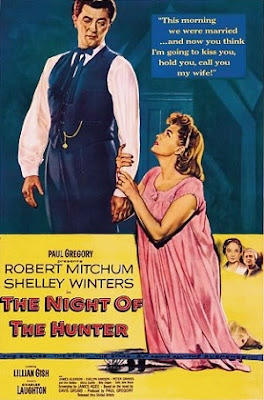 The Night of the Hunter is based on a novel by Davis Grubb that independent producer Paul Gregory acquired for an United Artists production. Gregory hired noted actor Charles Laughton for his directorial debut and writer and film critic James Agee to the pen the script. The role of Harry Powell was sought by both John Carradine and Laurence Olivier (Gary Cooper turned it down), but Mitchum won the part by being "diabolical" during the audition, according to Laughton. The result was a commercial and critical flop in 1955 that has since gone on to be considered one of the great American films.

As we've seen in the past three weeks, Mitchum had a richly diverse career, but he was also one of the few leading men who excelled at villain roles. In The Night of the Hunter, Mitchum gives what is perhaps his greatest performance as the malevolent Powell, who cloaks his misogyny and wicked ways in a veneer of religion. In fact, Mitchum, who was eager to get the part, plays the role rather broadly -- there are actually a lot of very funny moments in The Night of the Hunter, such as when he tells "the story of right hand, left hand" with his tattooed fingers --  but Harry Powell is also deeply terrifying. Mitchum never lets the audience forget Powell's very real menace, whether he's berating Winters' character on their wedding night or simply singing the old hymn, "Leaning on the Everlasting Arms."

The Night of the Hunter Viewer's Guide: This movie combines  film noir and horror to make one of the most distinctive visual and artistic statements in American cinema. Here's what to look for when you watch:

1. Laughton. This was the only film directed by the noted actor, who was devastated by the movie's poor reception. It's unfortunate that Laughton never got another chance to make a movie because he has a distinctive visual style that has never been duplicated.
2. Silent film. The Night of the Hunter's visual style owes much to silent cinema, especially German expressionism, which can be found in films like The Cabinet of Dr. Caligari (1920) and Nosferatu (1922). Watch for silent film homages in the bedroom scenes between Mitchum and Winters and a chilling iris shot that Laughton uses to emphasize Powell's menacing of the innocent children. The casting of the great silent film actor Lillian Gish also enhances the films throwback style.
3. The role of religion. The Night of the Hunter is often depicted as an anti-religious or anti-Christian movie, but I don't think that is the case. What the film really does is juxtapose Powell's hypocrisy with the true religion of Gish's character.
4. Leaning on the Everlasting Arms. This 1887 hymn by Anthony Showalter and Elisha Hoffman is forever immortalized in The Night of the Hunter. Mitchum, who had a lovely baritone voice, sings it throughout the film. At first it's a calling card to establish his Bible-thumping bona fides, but as the movie goes on it becomes a tool that Mitchum uses to menace the children.

Other critics: The Night of the Hunter has a 98 percent fresh rating on Rotten Tomatoes and Leonard Maltin calls it an "atmospheric allegory of innocence, evil and hypocrisy" and writes that "Mitchum is marvelously menacing" in a 3.5 star review for his Classic Movie Guide. Critics in 1955 mostly dismissed the film. The New York Times reviewer Bosley Crowther singled out Mitchum's performance for high praise -- "there is more than menace in his character. There is a strong trace of Freudian aberration, fanaticism, and iniquity" -- but he didn't like the child actors (he calls them "posey and incredible") and he felt that Laughton laid it on a bit too thick with the religious themes. The Variety reviewer wrote that Laughton and company failed to capture the "relentless terror" of Grubb's novel and instead focused on "offbeat touches that have a misty effect."

The Bottom Line: It's so sad that Laughton's extraordinary vision wasn't appreciated in his lifetime. This is simply one of the great American films: Part horror story, crime thriller, and religious fable that features an iconic performance from Mitchum.

Availability:  The Night of the Hunter will air at 8 p.m. Aug. 6 on TCM. It is also available on Blu-ray, DVD, and video on demand.


Next week, I'll begin the August theme of Summer Under the Stars. I'll have a movie for each Saturday's lineup. Next Saturday is Gene Kelly day, so I'll write about the musical On the Town (1949).