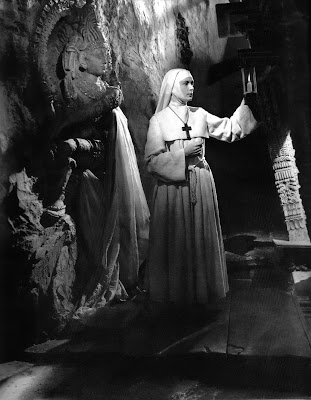 TCM is airing a night of movies from British directors Michael Powell and Emeric Pressburger this week. They include the haunting drama Black Narcissus (1947) about a group of nuns (Deborah Kerr is pictured above) who live in a remote Himalayan outpost.

Every Monday in June, TCM is airing the films of actress and fashion icon Audrey Hepburn. This week features some of her best later roles, including Breakfast at Tiffany's (1961) and My Fair Lady (1964). There's also a night of movies set in Italy and a Father's Day tribute.


I'll go in-depth on each pairing a little further down in the article, but first here's a quick rundown of what else is on the schedule.

Noir Alley: Charismatic killer on the run John Garfield hides out in Shelley Winters apartment in He Ran All the Way (1951) at 10 a.m. Sunday. This was Garfield's final film.

Best Day to DVR: Wednesday prime time and late night. TCM is airing a lineup of films from the great British directors Michael Powell and Emeric Pressburger. Collectively known as The Archers, the two men created some of the most beautiful and profound films ever made. The evening begins with the fantasy masterpiece A Matter of Life and Death (1947) at 8 p.m. about a downed World War II pilot (David Niven) who must plead for his life in a Heavenly court followed by perhaps the most beautiful Technicolor film ever made, Black Narcissus (1947) at 10 p.m. The late night lineup is equally interesting starting with the nearest The Archers ever got to noir, the addiction drama Hour of Glory (1949) at midnight; the wonderful road-trip romance I Know Where I'm Going (1945) at 2 a.m. which features a dynamite performance from the great Wendy Hiller, and the gentle drama of British eccentricity, A Canterbury Tale (1944) at 3:45 a.m.

Three daytime picks: The theme is movies about revolutions starting with the thriller Z (1969) at 6 a.m. about the assassination of a Greek politician (Yves Montand) followed by Kirk Douglas leading a slave revolt against ancient Rome in Spartacus (1960) at 10:15 a.m. Finally, Cornel Wilde suits up to fight the British in the Revolutionary War spy saga The Scarlet Coat (1955) at 4 p.m. This is actually a fun movie filmed partly on location in Sleepy Hollow, N.Y., that might appeal to fans of the AMC channel series Turn: Washington's Spies.

Prime time lineup:  TCM is celebrating the career of leading lady Audrey Hepburn each Monday in June. This week's prime time selections include two of her iconic roles: First as New York City party girl Holly Golightly in Breakfast at Tiffany's (1961) at 8 p.m. and then as Covent Garden flower girl Eliza Doolittle in My Fair Lady (1964) at 10:15 p.m.
Late night pick: One of Hepburn's most underrated movies was as the self-sacrificing nurse Sister Luke in The Nun's Story (1959) at 1:30 a.m.

Three daytime picks:  The theme is movies starring redheads starting with beloved flame-haired comedian Lucille Ball as a movie star whose agent (Jack Oakie) keeps coming up with harebrained publicity stunts in The Affairs of Annabel (1938) at 8:30 a.m. Next, English rose Greer Garson keeps a stiff upper lip during the dark days of the Blitz in Mrs. Miniver (1942) at 11:30 a.m. followed by Maureen O'Hara as a stubborn Irish beauty in The Quiet Man (1952) at 5:45 p.m.
Prime time lineup: A night of movies starring Marlene Dietrich starting with the actress as a jewel thief who gets hot and heavy with car designer Gary Cooper in Desire (1936) at 8 p.m. Dietrich plays a naive country girl who is caught between sculptor Brian Aherne and wealthy Lionel Atwill in The Song of Songs (1933) at 10 p.m.
Late night pick: The best role of Dietrich's later career was as the glamorous but devious Christine Vole in the Agatha Christie adaptation Witness for the Prosecution (1957) at 2 a.m. 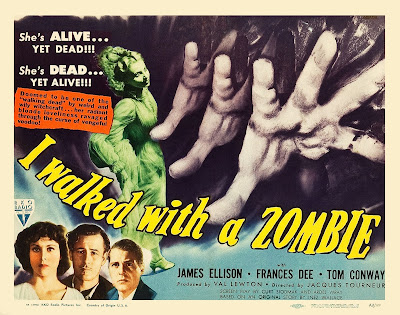 Three daytime picks: The theme is movies set on islands. Polynesian adventures that allowed for skimpy costumes and scenic locales like the Joel McCrea-Dolores Del Rio romance Bird of Paradise (1932) at 7:15 a.m. were especially popular in precode Hollywood. Next, Lionel Barrymore play a Devil's Island escapee who likes to shrink his enemies and sell them as slaves in The Devil Doll (1936) at 2:15 p.m. while Frances Dee meets the undead in the Caribbean in I Walked with a Zombie (1943) at 5 p.m.
Prime time: See the Best Day to DVR section.
Late night pick: See the Best Day to DVR section.

Three daytime picks: The theme is movies about spies starting with Greta Garbo as a glamorous secret agent in Mata Hari (1932) at 8:45 a.m. followed by Laurence Harvey as a brainwashed Communist spy in The Manchurian Candidate (1962) at 3:15 p.m. Advertising executive Cary Grant is mistaken for a spy in director Alfred Hitchcock's thriller North by Northwest (1959) at 5:30 p.m.
Prime time lineup: TCM is putting the spotlight on gay Hollywood every Thursday in June with movies from actors, directors, and screenwriters who were part of the LGBT community. Tonight's lineup features two fifties movies starring gay actors. First up is Sal Mineo as a troubled teen in Rebel Without a Cause (1955) at 8 p.m. followed by Rock Hudson as a misunderstood gardener struggling to find happiness in small-town America in All That Heaven Allows (1955) at 10:15 p.m.
Late night pick: One of the few old Hollywood movies to mention gay themes, albeit in a coded way, is the adaptation of out playwright Tennessee Williams' Cat on a Hot Tin Roof (1958) at midnight.

Three daytime picks: The LGBT theme continues in the morning with Liberace as a successful pianist who dreams of playing Carnegie Hall (he also dates both Joanne Dru and Dorothy Malone) in Sincerely Yours (1955) at 7:45 a.m.  The afternoon lineup is devoted to the work of  journeyman director Lew Landers starting with the fun movieland comedy Crashing Hollywood (1938) at 1:45 p.m., which stars Lee Tracy as a screenwriter who collaborates with a mobster (Paul Guilfoyle) to write a gangster film. Mystery writer Phillip Terry gets mixed up in real crime when he visits a deserted inn in Seven Keys to Baldpate (1947) at 5:30 p.m.
Prime time lineup: If you can't travel abroad this summer, you can take a European vacation on TCM every Friday night in June. Tonight's films are set in Italy starting with Olivia de Havilland and screen daughter Yvette Mimieux touring Italy in the underrated romance Light in the Piazza (1962) at 8 p.m. (I've long loved this film, and I'm glad TCM is finally showing it in prime time). Next, Vivien Leigh loses herself in the Eternal City in The Roman Spring of Mrs. Stone (1961) at 10 p.m.
Late night: Director Luchino Visconti's elegiac film Death in Venice (1971) is on at 2:15 a.m.

The Essentials series continues at 8 p.m. with new host Alec Baldwin. He will be joined by former late-night host David Letterman to discuss director Howard Hawks stylish noir The Big Sleep (1946) at 8 p.m. followed by two more films about author Raymond Chandler's fictional detective Philip Marlowe:  James Garner in Marlowe (1969) at 10:15 p.m. and Robert Montgomery in Lady in the Lake (1947) at midnight.

TCM has a great lineup of movies to celebrate Father's Day starting with Mickey Rooney and Lewis Stone doing some male bonding in Judge Hardy and Son (1939) at noon. Other daytime highlights are proper British dad Rex Harrison trying to introduce gauche daughter Sandra Dee to polite society in The Reluctant Debutante (1958) at 1:45 p.m. and William Powell as an eccentric turn-of-the-century dad in the TCM fan favorite Life with Father (1947) at 5:45 p.m. The prime time lineup features two films starring Spencer Tracy as doting suburban dad Stanley Banks: Father of the Bride (1950) at 8 p.m. and Father's Little Dividend (1951) at 10 p.m.