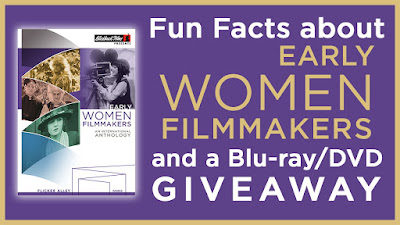 Old Hollywood Films is partnering with Flicker Alley to give away one Blu-ray/DVD copy of Early Women Filmmakers: An International Anthology. Click below to enter and learn some fascinating information about women in film.

Did you know that more women worked in the film industry during its first two decades than at any time since? Or that a woman created some of the first narrative films ever made? Or that in 1916, the highest-paid director in Hollywood was a woman?


Despite their incredible achievements, many early women filmmakers have been largely written out of film history, their contributions undervalued. On May 9th, Flicker Alley presents Early Women Filmmakers: An International Anthology on Dual-Format Edition Blu-ray/DVD, showcasing the work of 14 of early cinema's most innovative and influential women directors, re-writing and celebrating their rightful place in film history.

Read on for your chance to win a copy!

These women were technically and stylistically innovative, pushing the boundaries of narrative, aesthetics, and genre. Going back to the beginning of cinema, this collection makes visible the tremendous directorial contributions women made all around the world. Beautifully restored in high definition, Early Women Filmmakers features new scores by Sergei Dreznin, Frederick Hodges, Tamar Muskal, Judith Rosenberg, and Rodney Sauer and the Mont Alto Motion Picture Orchestra.

• Audio Commentary: For Lois Weber’s The Blot by author, professor, and expert on women and early film culture Shelley Stamp, courtesy of Milestone Film and Video.

For a complete list of films on the set, please visit Flicker Alley.


One lucky winner will receive a copy of Early Women Filmmakers: An International Anthology on Dual-Format Edition Blu-ray/DVD from Flicker Alley! Giveaway is open to residents of U.S./Canada and ends on May 22, 2017.

To enter, fill out the form below and then leave a comment about which film and/or director included in this anthology that you are most anticipating. The complete list of film is here.

Good luck and thanks for entering!