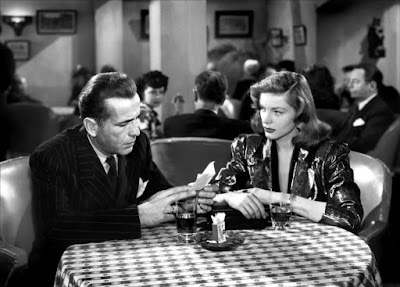 TCM is airing a day of movies from director Howard Hawks, including the noir The Big Sleep (1945), starring Humphrey Bogart and Lauren Bacall.

Every Tuesday and Wednesday in May, TCM is airing films from iconic leading man Clark Gable. This week features some of his best later roles, including Mogambo (1953), The Misfits (1960), and Run Silent, Run Deep (1958). There's also more treasures from the Disney vault and the annual Memorial Day war movie marathon.

Noir Alley: Robert Mitchum tries and fails to escape his former life of crime in the seminal noir Out of the Past (1947), at 10 a.m. Sunday

Silent Sunday Nights: Three short comedies about farmhands airing at midnight. First up is farmhand Harry Gribbon and banker James Finlayson competing for the affections of farmer's daughter Louise Fazenda in Down on the Farm (1920) followed by farm worker Charlie Chaplin longing for the lovely Edna Purviance in Sunnyside (1919). Finally, Roscoe "Fatty" Arbuckle bumbles his way into Winifred Westover's heart in Love (1919).

TCM Imports: Two popular films from Spanish directors starting with Pedro Almodovar's explicit comedy Tie Me Up! Tie Me Down! (1990) at 2 a.m.  Next is the thriller Barrios Altos (1987) at 4 a.m. about a woman (Victoria Abril) who is investigating the bizarre murder of her masseuse (Abel Folk).

Three daytime picks: The annual Memorial Day war movie marathon continues with movies about military missions starting with Frank Sinatra leading an OSS squadron through the Burmese jungle (somehow they still manage to run into Gina Lollabrigida) in Never So Few (1959) at 7:30 a.m. No war movie marathon would be complete without a little "Broadsword calling Danny Boy" courtesy of Richard Burton in the alpine adventure Where Eagles Dare (1968) at 2:30 p.m. Finally, Lee Marvin, Ernest Borgnine, and Robert Ryan lead a ragtag group of soldiers on a top-secret mission in The Dirty Dozen (1967) at 5:15 p.m.
Prime time lineup:  The prime time lineup is devoted to underwater adventures starting with Cary Grant leading a submarine crew into dangerous waters in Destination Tokyo (1943) at 8 p.m. followed by John Wayne as an obsessive sub commander in Operation Pacific (1951) at 10:30 p.m.
Late night pick: Dick Powell directed the first rate naval adventure The Enemy Below (1957) at 12:30 a.m. about the face-off between a German U-Boat captain (Curt Jurgens) and an American destroyer commander (Robert Mitchum).

Three daytime picks:  A birthday tribute to director Howard Hawks who was born May 30, 1896, in Goshen, Ind. He was a master of many genres including screwball comedy, film noir, and Westerns. In addition to the movies I mentioned in the "best day to DVR section," TCM is airing the adventure film The Big Sky (1952) at 3 p.m. about a 19th century fur-trapping expedition up the Missouri River.
Prime time lineup: TCM is wrapping up its month-long celebration of Clark Gable with some of his later movies starting with lawyer Gable falling for Sophia Loren in the rom-com It Started in Naples (1960) at 8 p.m. In Mogambo (1953) at 10 p.m., plantation owner Gable is torn between gold digger Ava Gardner and married lady Grace Kelly (if this plot sound familiar that because it's a remake of Red Dust).
Late night pick: The late-night lineup includes Gable's final film, The Misfits (1960) at 12:15 a.m., and the excellent submarine adventure Run Silent, Run Deep (1958) at 2:30 a.m.

Three daytime picks: The Gable movies continue with romances opposite some of old Hollywood's top leading ladies. First, race-car driver Gable and journalist Barbara Stanwyck (guess who she's investigating) clash in To Please a Lady (1950) at 6 a.m., followed by Gable trying to smuggle ballerina wife Gene Tierney out of Russia in Never Let Me Go (1953) at 7:45 a.m. Finally, Word War II soldier Gable suspects Dutch Resistance fighter Lana Turner of treachery in Betrayed (1954) at 9:30 a.m.
Prime time: A night of movies from Academy Award-winning director Delbert Mann who was known for making sensitive dramas like Middle of the Night (1959) at 8 p.m. about the May-December romance between Fredric March and Kim Novak. Next is Mann's best-known film, Marty (1955) at 10:15 p.m., about a schlubby butcher (Ernest Borgnine, he's everywhere this week) who unexpectedly finds love.
Late night pick: David Niven and Wendy Hiller won Oscars for Mann's superb drama Separate Tables (1958) at midnight about the intersecting lives of guests at an English resort.

Three daytime picks: A birthday tribute to character actor Frank Morgan who was born June 1, 1890, in New York City. Morgan is best-known for playing the Wizard of Oz in the MGM musical, but he appeared in dozens of films, including The Half-Naked Truth (1933) at 8:45 a.m., which finds Morgan as a Broadway producer who gets mixed up with carnival barker Lee Tracy and "hooch dancer" Lupe Velez. Next, Morgan plays Jeanette MacDonald's "benefactor" in the backstager The Cat and the Fiddle (1934) at 10:15 a.m. Finally, Eastern tenderfoot Morgan runs a cattle ranch with a little help from child star Virginia Weidler in Henry Goes Arizona (1939) at 4:45 p.m.
Prime time lineup: TCM is putting the spotlight on gay Hollywood every Thursday in June with movies from actors, directors, and screenwriters who were part of the LGBT community. Tonight's lineup features one of the few openly gay actors in old Hollywood, William Haines, in the pre-code romp Just a Gigolo (1931) at 8 p.m. Director James Whale is best-known today for his work on Universal Pictures horror films like Frankenstein (1931), but he also made the gritty 1931 version of Waterloo Bridge at 9:30 p.m. starring Mae Clarke and Douglass Montgomery (billed in this film as Kent Douglass).
Late night pick: Dorothy Arzner, who was one of the few female directors in old Hollywood, made films about strong independent women such as the Katharine Hepburn vehicle Christopher Strong (1933) at 3:30 a.m.

Three daytime picks: The daytime lineup features movies about assassinations starting with Nils Asther and Kay Francis carrying on a romance in the midst of the assassination of Austrian Archduke Franz Ferdinand in Storm at Daybreak (1933) at 9 a.m. followed by Christopher Lee as the murdered mystic in Rasputin, the Mad Monk (1966) at noon. Finally, detective Dick Powell tries to prevent the killing of Abraham Lincoln in The Tall Target (1951) at 6:30 p.m.
Prime time lineup: Film historian and critic Leonard Maltin unearths more treasures from the Disney vault starting with two Hayley Mills films: the musical Summer Magic (1963) at 8 p.m. about an impoverished Boston family who move into the country followed by Mills as an optimistic orphan in Pollyanna (1960) at 10 p.m.
Late night: The late night lineup features Disney shorts about horses starting with the Mickey Mouse cartoon Mickey's Polo Team (1936) at 12:30 a.m.

The prime time lineup is all about the juvenile Academy Awards, which was a special Oscar category given to outstanding child actors from 1934-1960. Peggy Ann Garner won for her touching performance as an intelligent young girl growing up in the Brooklyn slums in A Tree Grows in Brooklyn (1945) at 8 p.m. Shirley Temple was awarded the first juvenile Oscar for four films she made in 1934 including the sentimental comedy Bright Eyes (1934) at 10:30 p.m.