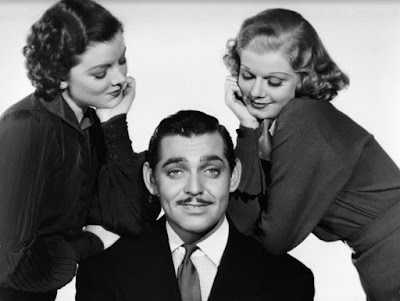 Every Tuesday and Wednesday in May, TCM is airing films from iconic leading man Clark Gable. This week features some of his best films with frequent costars Myrna Loy and/or Jean Harlow, including Wife vs. Secretary (1936), Red Dust (1932), and Manhattan Melodrama (1934). There's also a lineup of creature features and an evening dedicated to actress Frances Dee.

TCM Film Noir Franchise: Ambitious policeman's wife Barbara Stanwyck goes beyond the law to advance the career of her laidback husband (Sterling Hayden) in Crime of Passion (1957) at 10 a.m. Sunday.

Best Day to DVR: Tuesday prime time and late night and Wednesday morning. There's a great lineup of movies featuring star-of-the-month Gable opposite leading ladies Loy and Harlow. It starts with the ocean-going adventure China Seas (1935) at 8 p.m. and ends with Gable as an Irish politician in the biopic Parnell (1937) at 11:15 a.m. In between you've got a great screwball (Wife vs. Secretary at 9:30 p.m.), a horse-racing saga (Saratoga at 6:15 a.m.) and a landmark gangster film (Manhattan Melodrama at 12:45 a.m.).

Three daytime picks: The theme is movies made by prolific director Alfred E. Green, who worked with most of Warner Bros. top stars of the 1930s. Green directed George Arliss' Academy Award-winning performance as 19th-century British prime minister Benjamin Disraeli (1929) at 7 a.m. Next, the timely film It's Tough to Be Famous (1932) at 10 a.m., is  about a Naval hero (Douglas Fairbanks, Jr.) who becomes a mass media celebrity. Finally, Jean Arthur is smitten with boss George Brent in the rom-com More Than a Secretary (1936) at 4:45 p.m.
Prime time lineup:  The prime time lineup features movies made by brothers starting with documentary filmmakers Albert Maysles and David Maysles who are best-known for their portrait of the eccentric mother/daughter duo, "Big" Edie Beale and "Little" Edie Beale in Grey Gardens (1976) at 8 p.m. Belgian brothers Jean-Pierre Dardenne and Luc Dardenne make socially conscious films like La Promesse (1996) at 10 p.m., which is about a father (Olivier Gourmet) who involves his teenage son (Jeremie Renier) in human trafficking.
Late night pick: French brothers Auguste Lumiere and Louis Lumiere pioneered early cinema  in the 1890s. You can watch some of their short films at 3:30 a.m.

Three daytime picks: A birthday tribute to actor Henry Fonda, who was born May 16, 1905, in Grand Island, Neb. Fonda starred with Lucille Ball three times including in the drama The Big Street (1942) at 9:30 a.m. in which he plays a waiter who falls for a selfish showgirl. In his later career, Fonda often appeared in World War II films such as Battle of the Bulge (1965) at 12:45 p.m. Finally, Fonda plays a controversial secretary of state nominee in the politcal drama Advise & Consent (1962) at 3:45 p.m.
Prime time lineup: TCM is airing movies from star-of-the-month Clark Gable every Tuesday and Wednesday in May. Tonight's lineup features his movies with leading ladies Myrna Loy and Jean Harlow starting with Gable fighting off pirates and wooing Harlow in China Seas (1935) at 8 p.m. Harlow comes between married couple Loy and Gable in the screwball Wife vs. Secretary (1936) at 9:30 p.m.
Late night pick: Rubber plantation owner Gable can't decide between shady lady Harlow and married woman Mary Astor in Red Dust (1932) at 11 p.m. Gable and William Powell play childhood friends who grow up on the opposite sides of the law in Manhattan Melodrama (1934) at 12:45 a.m. (Loy plays Gable's girlfriend). Harlow and Gable play two crooks who fall for each other in Hold Your Man (1933) at 2:30 a.m. while reporters Gable and Walter Pidgeon chase scoops and lady aviator Loy in Too Hot to Handle (1938) at 4:15 a.m.

Three daytime picks: The Gable movies continue with Harlow's final film, the horse-racing saga Saratoga (1937) at 6:15 a.m. Next, society girl Loy distracts young doctor Gable away from his medical studies in Men in White (1934) at 8 a.m. Finally, in the biopic Parnell (1937) at 11:15 a.m. Gable plays 19th-century Irish politician Charles Stewart Parnell, whose advocacy for Irish independence was brought down by an affair with a married woman (played by Loy).
Prime time: The prime time lineup is devoted to films starring Frances Dee starting with her role as the mother of a son (Richard Crane) who is killed in World War II in Happy Land (1943) at 8 p.m. followed by An American Tragedy (1931) at 9:30 p.m., which is based on Theodore Dreiser's novel about a young man (Phillips Holmes) who falls in love with a beautiful heiress (Dee) despite his entanglement with another woman (Sylvia Sidney). Dreiser's novel was later remade as A Place in the Sun (1951)
Late night pick: Dee's best-known role is in the Jane Eyre-meets-voodoo horror film I Walked with a Zombie (1943) at 11:30 p.m. 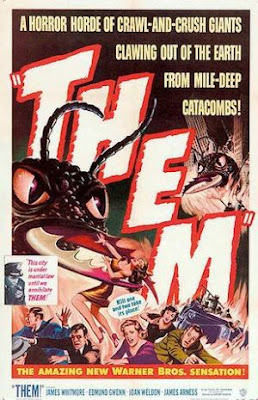 Three daytime picks: The theme is movies about pirates starting with sea captain Paul Henreid battling corruption and winning Maureen O'Hara in The Spanish Main (1945) at 8:45 a.m. Wallace Beery plays the legendary Long John Silver in the 1934 adaptation of Treasure Island at 12:15 p.m., followed by Errol Flynn buckling a great swash in another Robert Louis Stevenson classic, The Master of Ballantrae (1953) at 4:15 p.m.
Prime time lineup: TCM is putting the spotlight on creatures features every Thursday in May. Tonight's lineup features nuclear monsters starting with giant mutated ants terrorizing New Mexico  in Them! (1954) at 8 p.m., followed by the biggest, baddest nuclear mutant of them all, Godzilla, King of the Monsters! (1956) at 9:45 p.m.
Late night pick: Animator Ray Harryhausen's classic It Came from Beneath the Sea (1955) at 11:30 p.m. is about a nuclear submarine that causes a giant octopus to attack San Francisco. 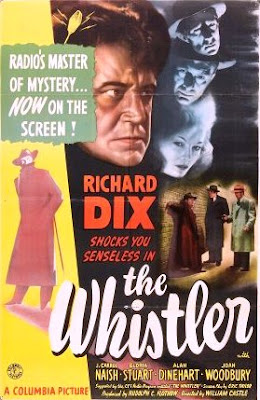 Three daytime picks: The theme is mystery series beginning with six of The Whistler movies starring Richard Dix, which was based on a popular radio drama about a mysterious crime fighter. The series stars with The Whistler (1944) at 6 a.m. and ends with The Return of the Whistler (1948) at 1:30 p.m. Jim Bannon plays private eye Rex Packard in three mystery movies starting with I Love a Mystery (1945) at 3 p.m.
Prime time lineup: The lineup celebrates the 50th anniversary of film made in 1967 with two groundbreaking movies. Paul Newman captures the spirit of sixties rebellion in the prison drama Cool Hand Luke  at 8 p.m. while director Arthur Penn and stars Warren Beatty and Faye Dunaway ushered in a new kind of American filmmaking in the gangster flick Bonnie and Clyde at 10:15 p.m.
Late night: The elaborate revenge saga Point Blank at 12:15 a.m. is the forerunner of modern action-adventure films like Taken (2008).

The Essentials series continues at 8 p.m. with new host Alec Baldwin.  He will be joined by former late-night host David Letterman to discuss the all-time great noir Gilda (1946) at 8 p.m. followed by two more films set in Buenos Aires: Rita Hayworth plays an Argentine dancer who enchants Fred Astaire in the delightful musical You Were Never Lovelier (1942) at 10:15 p.m., followed by World War II veteran Dick Powell hunting down Nazi collaborators in South America in Cornered (1945) at midnight.
Sunday, May 21

The prime time lineup is all about journalists working abroad starting with foreign correspondent William Holden falling for doctor Jennifer Jones in Love Is a Many Splendored Thing (1955) at 8 p.m. Next, journalist Mel Gibson gets caught up in a revolution in Inodnesia in The Year of Living Dangerously (1982) at 10 p.m.