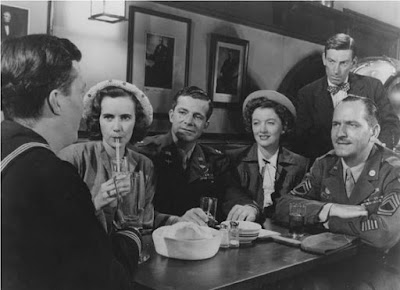 The World War II drama The Best Years of Our Lives (1946) is one of the classic movies airing on TCM this week. The photo shows from left: Harold Russell; Teresa Wright; Dana Andrews; Myrna Loy; Hoagy Carmichael, and Fredric March.


Every Tuesday and Thursday in April TCM is featuring movies from some of Old Hollywood's most beloved characters actors. This week's lineup includes such familiar faces as Guy Kibbee, Edward Everett Horton, May Robson, and Edna May Oliver. There's also an exclusive interview with Faye Dunaway and a night of World War II melodramas.

Silent Sunday Nights: Two comedies starring Roscoe "Fatty" Arbuckle.  First up is the short The Knockout (1914) at 12:30 a.m., which also features Charlie Chaplin in a small role. Leap Year (1921) finds Fatty as the reluctant heir to a fortune who is pursued by several different women.

Best Day to DVR: All day Friday. The theme of postwar melodramas begins with small-town expose King's Row (1942) at 9 a.m. and ends with Pearl Harbor drama From Here to Eternity (1953) at 3:45 a.m. In between you've got great weepies about divorce (East Side, West Side), Hollywood (The Bad and the Beautiful), and returning servicemen (The Best Years of Our Lives).

Three daytime picks:  The morning theme starts out with a birthday tribute to Marlon Brando, who was born April 3, 1924, in Omaha, Neb. The method actor gives a powerful performance in Reflections in a Golden Eye (1967) at 8:15 a.m. as a military officer who is obsessed with another man (Robert Forster).  The afternoon lineup is devoted to Doris Day, who was born April 3, 1922, in Cincinnati. Day considered actor Jack Carson her Hollywood mentor and they worked well together in several films, including the musical comedy It's a Great Feeling (1949) at 12:30 p.m. Day introduced one of her signature songs, "Secret Love," in the Western Calamity Jane (1953) at 4 p.m.
Prime time lineup:The prime time lineup is all about Faye Dunaway starting at 8 p.m. with her interview with TCM host Ben Mankiewicz at the 2016 TCM Classic Film Festival. Next is her breakthrough role as one-half of a Depression-era bank robbing duo in Bonnie and Clyde (1968) at 9:15 p.m.
Late night pick:  Dunaway won an Oscar for playing a ruthless TV executive in Network (1976) at 12:30 a.m.

Three daytime picks: The theme is movies adapted from classic books starting with the Greta Garbo version of Anna Karenina (1935) at 7:15 a.m. Next, Anne Shirley takes on her most famous role (she changed her name from Dawn O'Day to match the title character) as the feisty Canadian redhead in Anne of Green Gables (1934) at 11 a.m. MGM's adaptation of Pearl Buck's Pulitzer prize winning novel The Good Earth (1937) at 5:30 p.m. stars Luise Rainer as a rural Chinese woman.
Prime time lineup: TCM is featuring movies from some of old Hollywood's best character actors each Tuesday and Thursday. Tonight's lineup features four great gents starting with Guy Kibbee as a lawyer who falls for the charms of show girl Joan Blondell in Gold Diggers of 1933 at 8 p.m. Next, Edward Everett Horton plays the professor friend of free spirit Cary Grant in Holiday (1938) at 10 p.m.
Late night pick: Walter Connolly plays a millionaire who hires Ginger Rogers to pose as his girlfriend in Fifth Avenue Girl (1939) at midnight. The gender-switch comedy Turnabout (1940) at 1:45 a.m. is filled with wonderful character actors, including the always endearing Franklin Pangborn.

Three daytime picks: A birthday tribute to actor Melvyn Douglas, who was born Melvyn Hesselberg on April 5, 1901, in Macon, Ga. Douglas' theatrical background got him parts in early sound films like the intriguing murder mystery Dangerous Ground (1935) at 7:30 a.m. During the later part of the decade he built a reputation as a suave leading man in movies like I'll Take Romance (1937) at 10:15 a.m. opposite opera star Grace Moore. Douglas became one of old Hollywood's most sought-after character actors during the postwar period in films like the teenage drama On the Loose (1951) at 4:30 p.m.
Prime time: A tribute to Zsa Zsa Gabor who died Dec. 18 at age 99. First up is she and third husband George Sanders in Death of Scoundrel (1956) at 8 p.m Gabor and Sanders were divorced by the time this film, about a suave con man who uses beautiful women, was released. Next, Gabor plays a beautiful trapeze artist in the Jerry Lewis-Dean Martin comedy 3 Ring Circus (1954) at 10:15 p.m.
Late night pick: Gabor's best performance is as a Montmartre nightclub singer in director John Huston's Toulouse-Lautrec biopic, Moulin Rouge (1952) at 2 a.m.

Three daytime picks: A birthday tribute to Walter Huston who was born Walter Houghston on April 5, 1883, in Toronto. Huston was an important actor in pre-code Hollywood in films like Kongo (1932) at 9:30 a.m., which features Huston in an Apocalypse Now like scenario as a madman who rules an African colony. If you're watching the Netflix series Five Came Back, you might be interested in the Huston's voice overs in World War II documentary Report from the Aleutians (1943) at 3 p.m., which was directed by Huston's son, John Huston. The younger Huston directed his father to a best supporting actor Oscar in the modern Western, The Treasure of the Sierra Madre (1948) at 5:45 p.m.
Prime time lineup: The character actors continue with four grand dames starting with May Robson as the housekeeper for idealistic country doctor Lionel Barrymore in One Man's Journey (1933) at 8 p.m. Comedienne ZaSu Pitts has one of her few leading roles in Sing and Like It (1934) at 9:45 p.m. as the tone-deaf gangster's girlfriend who tries to break into Broadway.
Late night pick: New England patrician Edna May Oliver plays the redoubtable Aunt Betsey Trotwood in David Copperfield (1935) at 11:15 p.m. Helen Broderick plays the wisecracking friend of newlyweds Barbara Stanwyck and Gene Raymond in The Bride Walks Out (1936) at 1:45 a.m. 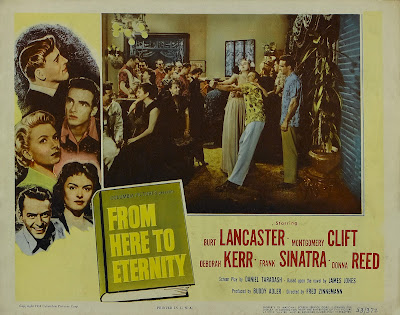 Three daytime picks: TCM is putting the spotlight on postwar melodramas starting with two soapers set in small Midwestern towns: King's Row (1942) at 9 a.m. and Some Came Running (1958) at 1:15 p.m. The afternoon lineup features Hollywood stories, such as Kirk Douglas' role as a demanding producer who steamrolls everyone around him in The Bad and the Beautiful (1952) at 3:45 p.m.
Prime time lineup: The evening lineup is dedicated to World War II melodramas starting with the amnesia-plus-murder weepie Love Letters (1945) at 8 p.m., which stars Joseph Cotten and Jennifer Jones. Director William Wyler's masterpiece about three returning soldiers (Fredric March, Dana Andrews, Harold Russell) The Best Years of Our Lives (1946) at 10:15 p.m.
Late night: From Here to Eternity (1953) at 3:45 a.m. deals with the intertwined lives of soldiers and civilians just before the Japanese bombing of the Pearl Harbor Naval base.

The prime time lineup is all about movies written and directed by Nunnally Johnson. The Oscar-nominated screenwriter turned to directing his own scripts in the 1950's in movies like the corporate expose The Man in the Gray Flannel Suit (1956) at 8 p.m., the Broadway murder mystery Black Widow (1954) at 10:45 p.m., and the psychological drama The Three Faces of Eve (1957) at 12:45 a.m.

The prime time lineup is devoted to cartoons that were shown at the National Film Board of Canada's Animation Film Festival. Titles include Mail Early (1941), Boogie-Doodle (1941), The Owl Who Married a Goose (1975), and Monsieur Pointu (1975).