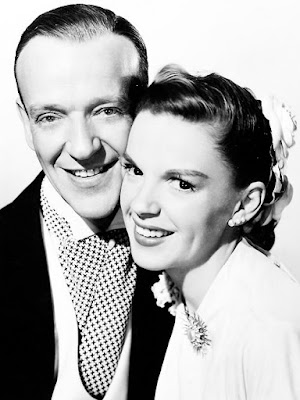 Easter Parade (1948), starring Fred Astaire and Judy Garland, is one of the 1001 classic movies you should see.

Each Monday, I'm going to recommend a classic movie you should see (for the reasons behind the 1001 series and reviews of earlier films covered go here). This month I'm celebrating Easter with three films that are related to the spring holiday. This week's selection is the musical Easter Parade (1948).

Easter Parade tells the story of Don Hewes (Fred Astaire), a Broadway star whose dancing partner Nadine Hale (Ann Miller) leaves him to become a star in the Ziegfeld Follies. Don finds a new leading lady in chorus girl Hannah Brown (Judy Garland), and, after a few false starts, they become a successful Vaudeville team. Eventually, Don and Hannah begin to fall in love, even though he still carries a torch for Nadine and Hannah is attracted to Don's handsome and rich best friend, Jonathan Harrow III (Peter Lawford). 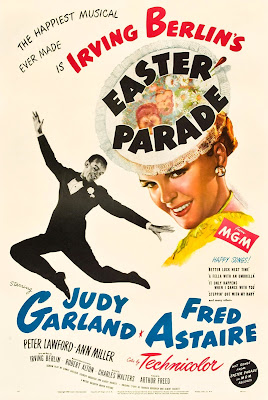 By 1948, prolific composer Irving Berlin had written an impressive catalog of songs, so he decided to hire screenwriters Frances Goodrich and Albert Hackett to pen a script for a musical that would center around Berlin's own experiences as a Broadway songwriter. MGM producer Arthur Freed bought the rights for his famed musicals unit, and after some trial and error in the casting (more on that below), he and Good News (1947) director Charles Walters released MGM's biggest hit of the year.

Easter Parade is one of the most familiar of the Freed unit musicals, partially because it is one of the few old Hollywood films that center around the secular traditions associated with the spring holiday. The "Drum Crazy" number features plenty of Easter paraphernalia (Astaire bargains with a young boy for his stuffed rabbit), but the movie's piece de resistance is the recreation of the annual Easter Parade. The New York City tradition, which is still going strong in 2017, features the fashionable and the fashionably quirky strutting up and down Fifth Avenue in their finest spring attire.

Easter Parade Viewer's Guide: This movie is a joyous slice of nostalgia that features the only onscreen pairing of Astaire and Garland. Here's what to look for when you watch:

1. Casting. The final cast of Easter Parade was the result of some not-so-happy accidents. Gene Kelly was originally slated to play Don, but he was sidelined by a broken ankle, which brought the recently retired Astaire back to the big screen. Also, Cyd Charisse, who was originally cast as Nadine, pulled a tendon, which gave Miller her big break.
2. Steppin' Out with My Baby. Astaire's gravity defying dance in this number is simply one of the iconic moments in old Hollywood history. Although it has been endlessly imitated, even by Astaire himself, the impact in the original film is still considerable.
3. Jules Munshin. The character actor has a memorable cameo as a fussy French waiter. His comic  routine with an imaginary salad reduces Garland and Lawford to helpless laughter.
4. The Easter Parade song. Berlin's famous tune originally appeared in the musical biopic, Alexander's Ragtime Band (1938), and it was also warbled by Bing Crosby in Holiday Inn (1942).

Other critics: Easter Parade has an 89 percent fresh rating at Rotten Tomatoes and Leonard Maltin calls the film "too good to watch just at Easter time" in a 3 1\2 star review in his Classic Movie Guide. Critics in 1948 praised the movie, especially heaping plaudits on Astaire. Thomas M. Pryor of The New York Times wrote that "for sheer simplicity and poetry of motion his dancing in 'Easter Parade' would be difficult to equal, much less better." The Variety critic concurred. "Astaire’s standout solo is the elaborate production piece ‘Stepping [sic] Out with My Baby,' during which he does a slow-motion dance in front of a large chorus terping in regular time."

The bottom line: Easter Parade is a delightful family that you can enjoy during any season. Watch it for the luxe MGM production values and the top-notch musical numbers, especially "Steppin' Out with My Baby" and "A Couple of Swells."

I'll be off next week for Easter, but I'll return on April 24 to write about James Dean's memorable holiday weekend in the teen drama, Rebel Without a Cause (1955).