Joan's Back in Dancing Lady 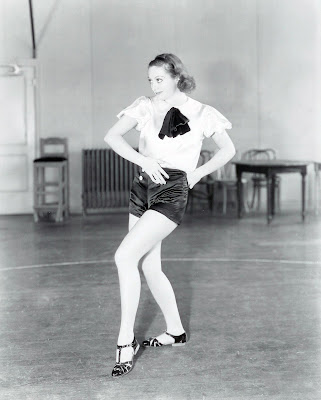 
The good folks at Warner Archive are bringing five classic Joan Crawford movies back into print. Each Friday in March, I'll have a review of one of these movies, starting today with the pre-code musical, Dancing Lady (1933). Warner Archive re-released five films of Crawford's great rival, Bette Davis, in September. You can check out my series on those films here.

Source Material: A novel by James Warner Bellah that was serialized in The Saturday Evening Post. 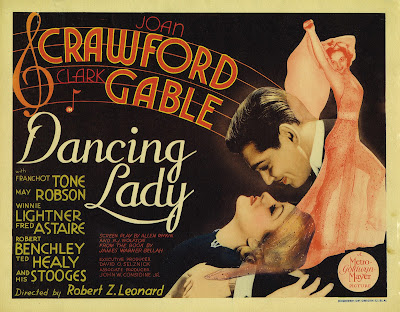 The Plot: Janie Barlow (Crawford) is a New York City burlesque dancer who dreams of becoming a top Broadway star. After a police raid on her club, Janie catches the eye of rich playboy Tod Newton (Franchot Tone), who bails her out of jail and recommends her to a top Broadway producer (Grant Mitchell), who is putting on a new musical with famed director Patch Gallagher (Clark Gable). Janie and Tod begin dating and, although she enjoys his jet-set lifestyle, she instead finds herself attracted to the tough-as-nails Patch.

Backstory: MGM acquired the rights to Bellah's novel as a vehicle for Crawford, who had recently suffered two box-office disappointments. Studio chief Louis B. Mayer requested that Leonard and producer David O. Selznick create a lavish backstage musical that would top the success of Warner Bros. 42nd Street (1933).

Joan's career at the time of Dancing Lady: Joan first became a top MGM star  by playing wild flappers in films like Our Dancing Daughters (1928), and her success continued in the sound era with films like Possessed (1931) and Grand Hotel (1932). Joan stumbled a bit in the melodramas Rain (1932) and Today We Live (1933), but the huge box-office success of Dancing Lady made her one of the top-earning stars in pre-code Hollywood (the only stars that outranked her in 1933 were Janet Gaynor and Marie Dressler).

Joan's men: No Crawford movie is complete without at least two men in the cast hopelessly in love with her. Here's the rundown of her leading gents in Dancing Lady.
Tod Newton: Played by Tone, who would soon become Joan's second husband, this tuxedo-clad playboy becomes instantly infatuated with Janie as soon as he spots her spangly underpants in the burlesque show. Despite an all-expenses-paid trip to Cuba and weekend trips to his fabulous mansion (the swimming pool alone must have blown MGM's budget), Janie isn't sure the aristocratic Tod is the right man for her.
Patch Gallager: Played by Gable in their fourth film together, this Broadway visionary hides his love for Janie under a tough exterior. He mostly expresses his affection by trading sarcastic jabs while they're working out, although his facade occasionally cracks, such as when Janie collapses from a sprained ankle.

Joan's clothes: Crawford's slim figure made her one of old Hollywood's leading clotheshorses. Here's three of her best Adrian-designed looks from Dancing Lady,
1. Crawford ensemble for the finale is a spectacular ruffled gown with large ostrich-feather sleeves that stand-in for her beloved shoulder pads (photo above with Astaire).
2. Crawford wears a sleek backless gown adorned with gardenias for a romantic interlude with Tone.
3. Crawford's cowl-neck and fringe swimsuit is the last word in thirties chic.

Best scene: Art director Merrill Pye pulled out all the stops for the lavish final production number. Watch for several design elements that are quite similar to The Wizard of Oz (1939), such as the large castle in the background and a circular brick road.

Best Line: "I'm like the guy throwing quarters into the slot machine. I keep on trying" -- Janie

Fun Fact: Dancing Lady was the film debut of Fred Astaire, and it featured the first major movie role for singing star Nelson Eddy. It also featured The Three Stooges, who were then partnered with comedian Ted Healy, as comic relief stagehands.

The Critics: Dancing Lady has a 70 percent favorable audience rating on Rotten Tomatoes, and Leonard Maltin writes that "Show-biz story, three-cornered romance are strictly standard, but cast and MGM gloss add points" in a two and 1\2 star review for his Classic Movie Guide.

The Bottom Line: Viewed today, Dancing Lady is a fascinating pre-code romp that features sleek camerawork and MGM's luxe production values. Watch it for Crawford and Gable's unrivaled chemistry, the spectacular production numbers, and a pre-stardom look at Astaire, Eddy, and The Three Stooges.

Availability: Dancing Lady will air at 1 a.m. May 9 on TCM. It is available on DVD from Warner Archive (link below) and on video on demand

Check out my review of the new DVD re-release of the Crawford melodrama, A Woman's Face (1941).